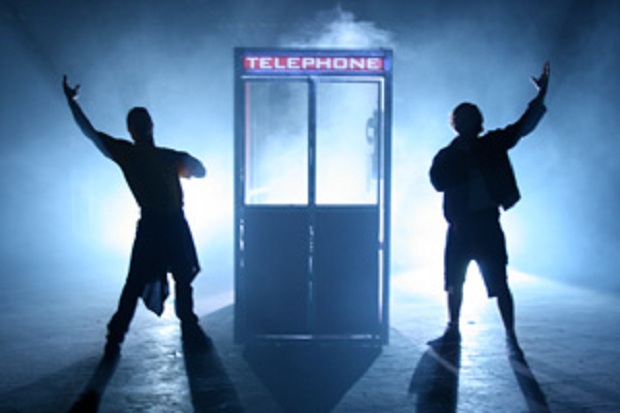 Welcome to another installment of What If, where one of the greatest films of the 1980s meets the age-old boxing fanwank about comparing fighters across eras.  You may be wondering why I’m setting this in 1988 besides the obvious movie reference.  The answer is equal parts “because I felt like it, shut up”, and “wait for the last part, just trust me on this one.”

San Dimas, California, June 27, 1988
A telephone booth sits next to a boxing ring set up in the San Dimas High School gym…a strange sight, or it would be if not for the events in the auditorium a couple of weeks prior, when Bill S. Preston and Ted Theodore Logan passed their history class and in the process introduced the world to a piece of leftover 27th-century technology that would pepper history with enough predestination paradoxes to make everyone and their grandfather (or, simply, “everyone”) scratch their heads.

For after the greatest high school history report in the entire annals of high school history reports, the boys were approached by representatives of HBO and boxing historian Bert Randolph Sugar and given a new mission: Go back through the last eighty years of world-class heavyweight boxing and bring back the greatest fighters from every decade from the 1910s to the 1980s for a 32-man ultimate showdown of ultimate destiny (good guys, bad guys, and explosions, as far as the eye can see) to determine the greatest heavyweight fighter of all time.

So the boys went over to the Circle K to grab some munchies, got into their time machine, and started making some long-distance calls.  When they came back, they brought with them a motley crew of fighters to kickstart the heart of their home, sweet home.

Over the next few weeks here on What If, we’ll be pitting those fighters against each other in some action-packed fights.  But first, let’s take this week to introduce the men who will be fighting in these epic fistic battles of history:

1910s: Jack Johnson, Jim Jeffries, Jess Willard, and Frank Moran
Johnson and Jeffries fought in the original “Fight of the Century” in Reno on July 4, 1910, to that point in history the biggest fight that boxing had ever seen.  Jess Willard was Wladimir Klitschko a hundred years ago, a man so much bigger and stronger than anyone put in front of him that he must have seemed more beast than man, and Frank Moran was a guy who was the Earnie Shavers of his day, a guy who would’ve been a hell of a champion in his own right had he not fought in an era when other guys (particularly Willard) were just a little bit too good and when, without benefit of a ton of sanctioning bodies and “interim” and “super” champions, one couldn’t simply duck the best guys and have a “title run” based on a paper champion’s belt.

1920s: Luis Firpo, Jack Dempsey, Gene Tunney, and Jack Sharkey
Firpo was the guy who finally put an end to Willard’s career, knocking him out in 1923 in what would have been the Upset of the Decade if not for Dempsey and Tunney’s infamous “Long Count” fight in 1927.  Jack Sharkey, for his part, had a career that spanned decades, and fought both Max Schmeling (beating him for the heavyweight title in 1932) and Joe Louis (where Sharkey’s career ended in 1936), but he goes here for reasons relating to getting more fighters from the 1930s into the next section.  The following decade was sufficiently talent-rich that it seems a shame to leave Sharkey out on those grounds.

1930s: Joe Louis, Max Schmeling, Primo Carnera, and Max Baer
Louis and Schmeling, you knew would be here.  This time they don’t have alt-history World War II to alter their stories.  Primo Carnera was the beast of the first half of the decade, as vicious a fighter to come out of Italy as any short of Pizza Pasta from the arcade version of Punch-Out.  Max Baer rounds out the top four; a champion in his own right, he went 2-1 against the other three guys on this list during the best part of his prime during the first term of President Roosevelt.  If boxing were soccer and this were a World Cup, this would be right up there with the 1970s (more on this later) as the Group of Death.

1940s: Billy Conn, Jersey Joe Walcott, Joey Maxim, and Lou Nova
Who’s Lou Nova?  The guy who ended Max Baer’s career in 1941 and a guy who fought Joe Louis as a member of the Bum of the Month Club in that same year.  World War II cut the talent pool down for this decade, and moving Ezzard Charles or Archie Moore into this decade wouldn’t seem right because Moore was still fighting as a middleweight as late as 1944 and didn’t move up to heavyweight until after 1950, while in a similar vein, Ezzard Charles also fought the 1940s between middleweight and light heavyweight, moving up to heavy only in 1949 and having his best years in the decade that followed.  This will become another point that makes sense when (see below) we lay out the rules and methodology behind this tournament.

1950s: Rocky Marciano, Ezzard Charles, Archie Moore, and Ingemar Johansson
Marciano is on this list for obvious reasons; Charles and Moore make it for finally moving up to heavyweight and coming into their own as fighters between 1950 and 1955.  Johansson is here because during the 1950s he was in Europe becoming one of the greatest fighters ever to battle on the European circuit, finally capping off the decade by fighting for the first time in the United States, knocking Floyd Patterson out in three rounds to gain the heavyweight championship of the world.  Johansson’s peak was on June 26, 1959; Patterson’s best years were in the early Sixties, so he goes there and Ingo goes here.

1960s: Sonny Liston, Floyd Patterson, Jerry Quarry, and Jimmy Ellis
Patterson and Liston were lineal champions in the early part of the decade; Quarry and Ellis were the best fighters during the interregnum after Muhammad Ali had his issues with the US Army draft board.  Ali goes in with the fighters from the 1970s to create a Group of Death; this then becomes an interesting exercise in the front half of a decade and the back half that may illustrate just what a desert boxing would’ve been for six solid years had Ali not held the fort down for half of that span.

Coming into the tournament, pundits said this was the easiest group to predict.  Top-heavy and with only two clear contenders, the 1960s might have been the weakest decade in championship boxing, and we might be speaking of Ali the same way we talk about the Klitschko brothers if it hadn’t been for events much later on in his career.

1970s: Muhammad Ali, Joe Frazier, George Foreman, and Ken Norton
The first three are very, very obvious.  The fourth, Norton, is there because “styles make fights” and nobody in the 1970s gave Muhammad Ali more fits style-wise than did Norton, one of only two fighters (Frazier, of course, was the other) to give a truly still-at-the-height-of-his-powers Ali trouble.  Sure, Leon Spinks beat Ali in ’78, and the less said about Ali’s fights with Larry Holmes and Trevor Berbick the better, but Norton makes the best case for being the fourth-best fighter of the 1970s overall, so he’s in.  This is truly the Group of Death from the greatest era in heavyweight boxing history.

1980s: Larry Holmes, Pinklon Thomas, Tim Witherspoon, and James “Bonecrusher” Smith
“But Fox, WHERE IS MIKE TYSON?”  Oh, you thought I left him out?  You seriously thought I left him out?  Story-wise, Tyson isn’t in San Dimas on June 27, because he’s off fighting Michael Spinks and destroying him in one round.  But don’t worry.  I’ll get to him, and in a boxing story series inspired by an ’80s movie, that should clue you in…

TOURNAMENT FORMAT AND RULES
You’ve seen me use the term “Group of Death” more than once in those intros, and you’ve also surely noticed that I’ve divided the fighters into eight groups of four.  If you guessed that I was going for a World Cup soccer-style group stage, you’re on the ball; give yourself a pat on the back.

Each fighter will fight each other member of his group once in a 1o-rounder; the two best fighters in each group will then head to the knockout stages (possibly literally as well as figuratively.)  Think of the ’10s through the ’80s as Groups A through H; the way they’ll be bracketed will be:
1A vs. 2B
1C vs. 2D
2A vs. 1B
2C vs. 1D
(and similar on the other side of the draw.)

Fights leading up to the finals are 12 rounds; the grand final will be 15.

Certain other assumptions are being made here, namely that improvements in sports nutrition and everything else are discarded; just imagine a training montage over a score composed by Bill Conti if you want to get in the right mind frame.  Every fighter is fighting at the best possible form; think “nobody could have beaten him on that night”.  Joe Louis, for example, is in the form he was in when he knocked Schmeling out in one round.  Ali’s in the shape he was in for the Foreman fight, Foreman’s in the shape he was in when he fought Frazier in the “DOWN GOES FRAZIER” fight, and Frazier is on form from his win over Ali (and good luck sorting that out in your head.)

In other words, this series is to decide which fighter, on his very best day, is the greatest of all time (well, all time up to June 27, 1988.)

We’ll get to the start of the actual fights next week.  Meanwhile, let the debate rage in the comments, both here and on the Tribune’s social media platforms, and place your bets!

…and seriously.  I haven’t forgotten about Tyson.  If you’ve seen an ’80s sports movie, you can guess how it’s going to go.

Fox Doucette writes the weekly What If series for The Boxing Tribune and contributes occasional features in the “prime” timeline as well.  He covered ESPN Friday Night Fights for this publication from 2011-13.  Fan mail, hate mail, and thoughts on who should be the referee in these bouts can be sent to beatcap@gmail.com.  Follow Fox on Facebook: facebook.com/MysteryShipRadio.