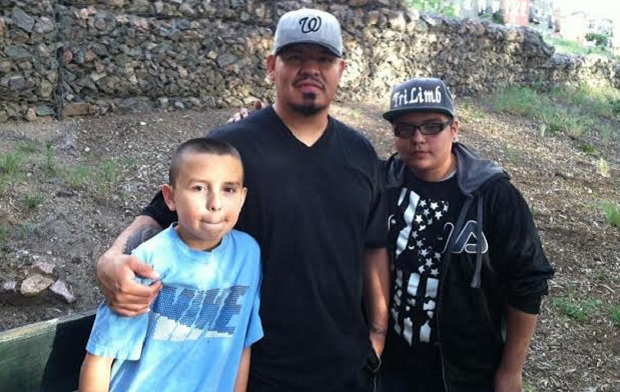 Jennifer fights everyday. She’s battling leukemia, she has been since February. She’s 13, an eight-grader at Mead Middle School in Miliken, CO. She is currently in remission, starting her maintenance stage of chemotherapy for the next 2 years. “After the fight, I can take my gloves off. Jennifer keeps hers on everyday and continues to fight. So on Saturday, I fight for her” says heavyweight, Kenny Lemos.

Lemos is no stranger to fighting, literally and figuratively. He grew up in the Westside of Denver, CO. Fighting was a daily thing, over territory or family, ” I was quiet but I always remember, when it was time to go, I was never scared”. Although Lemos didn’t like fighting, he understood why he had to. With no father figure until the age of 13, he didn’t know any better. Those street fights led him to the boxing gym as a teenager

He was once considered a respectable prospect. He began his career 8-1-1, losing to fellow prospect Israel Garcia in only his second fight. Garcia was 12-1 at the time. In his last notable bout, he was seen breaking Chris Arreloa’s nose in a loss. Since the Arreola bout, Lemos is just 4-6-1. He did however, lose a questionable bout to future hall of famer, James Toney

After years of reflecting, Lemos is battling regrets. ” I never took it serious. I never ate properly, I never trained properly. I just fought.” He’s a humble man, stating he never saw himself as a contender or a major player. Yet, anyone who watched his career closely, saw it differently. He was an agile big man with fast hands. Those same people have always wondered, what if Lemos fought at 240 instead of 260? ” I was blinded for many years, never seeing just how great I could be”.

We all live with regret, not realizing how we could find a way to change those regrets. Kenny will enter the ring around 270, but a different 270. He’s coming down from 325 pounds. “It doesn’t stop here though, my goal is 245, for my life, not boxing”.

It’s deeper, though. In 2013, Lemos hurt his back. For days and weeks, he could barely walk and needed help with the basic daily needs. “My sons, Julian and Diego, basically had to help me dress daily. I told myself I would never go though that again”.

Like I said, it’s deeper though. In 2010, his oldest son, Diego, was struck by his school bus. When the dust settled, doctors would have to amputate his leg. “He never skipped a beat, he believes it was meant to happen. It still continues to amaze everyday with the spirit that shines through him.” Recently, Diego, 14, released a rap mix tape under the name Tri-Limb entitled, “Tragedy and Triumph”

So when Kenny steps into the ring this coming Saturday, October 25, he does so for three reasons. He fights for Jessica so that maybe one day she no longer has to. He fights to prove to his sons that no matter what, when life knocks you down, you have to get back up. And finally, he fights for himself, ” This isn’t a comeback fight. This is a farewell fight, I just want to be happy with my career and walk away knowing I was never scared of a challenge.”

Although boxing provided many unforgettable memories, he understand there’s life after boxing. He’s dedicating himself to becoming a better man, spiritually and physically, ” I am a father. I realize it isn’t just about being there that’s important. I have to set an example for my sons.” He’ll also miss the final game of his little league football team, a team he has coached for the last 3 years. At the end of the fight, when the gloves are removed for possibly the final time, Lemos is still a coach, still a father. Boxing and fighting was just a part of his life.