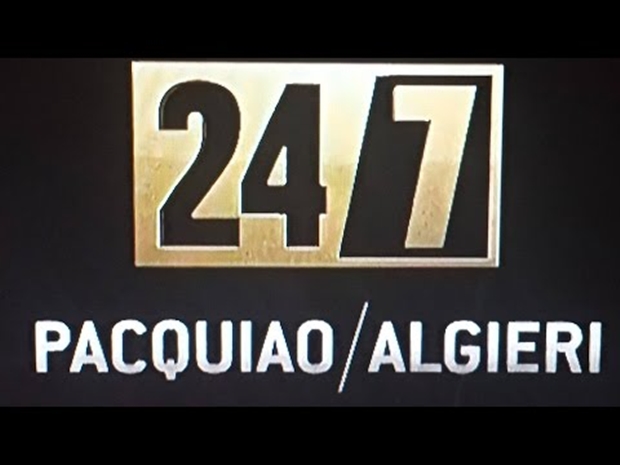 If HBO’s one-shot episode of “24/7 Pacquiao-Algieri” was meant to get fans excited about the upcoming November 22 PPV bout, it didn’t achieve its goal. This series began like many other Manny Pacquiao versions before it, with highlights of his early star making performances—including knockouts of Ricky Hatton and Miguel Cotto—as if to remind us that there was once a time when Pacquiao knocked people out. It then went on to show the Filipino Congressman making political appearances, and trainer Freddie Roach saying how much he misses the old days, when boxing was his fighters main focus. We’ve heard all of this before.

If this “24/7” is going to entertain, and also get us to salivate over this least anticipated match-up, it needs to sell the Chris Algieri story. They began that effort by showing us that Algieri lives in the basement of his parents humble Long Island, N.Y. home. A notation of his college education was then made, like it has been throughout the promotion, as if someone’s going to pay 70 bucks for a fight because Algieri has a diploma. The highlights of his win over Ruslan Provodnikov won’t get you to reach for your wallet either. He was floored twice in the first round, then boxed well enough the remainder of the bout to squeak out a split decision victory.

A segment of Pacquiao’s sorry attempt at professional basketball and Algieri’s visit to his college homecoming football game were uninteresting. And in a sport filled with stories of poor kids overcoming adversity, things became borderline insulting with HBO’s attempt to portray Algieri as a humbled less fortunate boxer because he’s “still” driving a Honda Accord.

The strength of a “24/7” show is the last minute, when they usually mesh training clips of both fighters and add music to it. This edition had that, and ended with Algieri telling us how he would “make something special happen” come fight night. Were his words strong enough to make most want to part with their hard earned cash? Probably not.

In the past, as the fight would near, the show tended to get better. But HBO decided this time to have only one 30-minute 24/7, rather than a series of four. If HBO wants to improve on the meager numbers produced by Pacquiao’s last tilt overseas, their promotional team is going to have to work extra hard now to convince the buying public that Pacquiao-Algieri is an event worth watching.