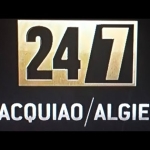 If HBO’s one-shot episode of “24/7 Pacquiao-Algieri” was meant to get fans excited about the upcoming November 22 PPV bout, it didn’t achieve its goal. This series began like many other Manny Pacquiao versions before it, with highlights of his early star making performances—including knockouts of Ricky Hatton and Miguel Cotto—as if to remind us that there was once a time when … END_OF_DOCUMENT_TOKEN_TO_BE_REPLACED

by Eric 'Sugar Foot' Duran With all the negative media surrounding Floyd Mayweather these days, one would guess he was public enemy #1. With bloggers and writers trying to make a name for themselves by coat riding "Money", no one seems to remember the great things he has accomplishing in boxing and the promotion of the sport. We can start with the HBO series 24/7. The series … END_OF_DOCUMENT_TOKEN_TO_BE_REPLACED