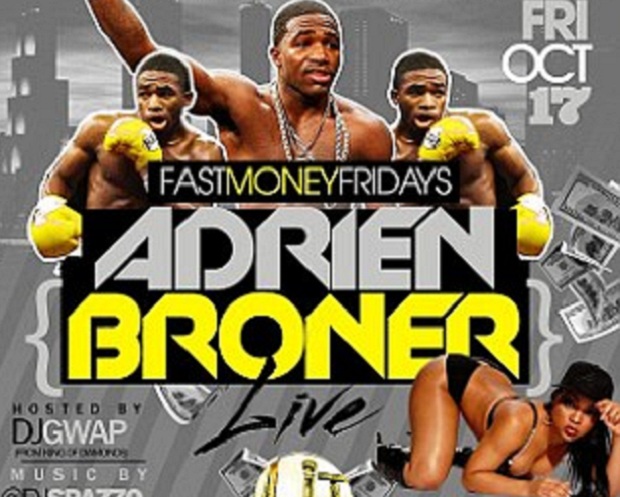 According to TMZ, Broner’s people are putting the fighter’s name out there as a celebrity party attendee, willing to grace your nightclub, strip club, or private party with his presence for anywhere between $6,000-$10,000 a night.

Reportedly, Broner has already done several dates and is almost booked up through the end of this year- although Thanksgiving and Christmas are still available for the right price.

And while 6-10K a night is good money for anyone, it’s relative chump change compared to what Broner could be making with a good name fortified by a career where he is actually reaching his potential.

The fighter, who posted mediocre wins over Carlos Molina and Emmanuel Taylor this year after an embarrassing bashing at the hands of Marcos Maidana in late 2013, has no immediate plans to return to the ring, but will supposedly be hitting the gym again in December.

However, these extracurricular stunts always walked hand in hand with the ring performances of a rising young fighter, who showed promise of being boxing’s next superstar.

Post-Maidana loss, the media has been slow to share his video stunts and fans don’t really seem to care all that much about the fighter who was being touted by some as the “next Mayweather.”

The reality of the matter for Broner is that he’s famous because he’s a fighter…period. He is the fighter– who is also a social media provocateur, hip-hop performer, and now professional partier. As his career fizzles and/or dwells on a second and third tier level, people will care less and less about his dumb online jokes or about rubbing elbows with him at some club.

If Broner continues to treat his bread and butter boxing as an afterthought, he’s going to eventually find himself waiting in line to enter the same clubs he now charges for the privilege of his presence.