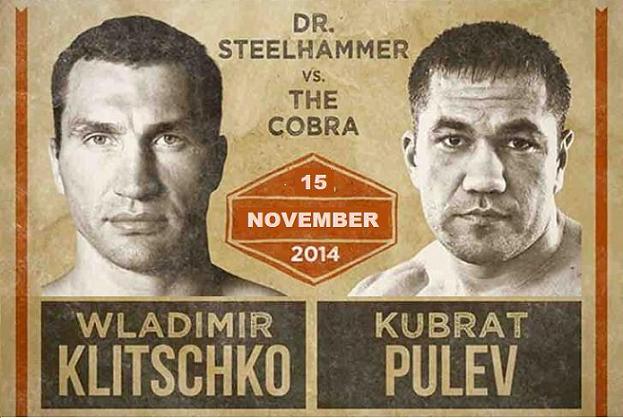 Saturday at the O2 World Arena in Altona, Hamburg, Germany, world heavyweight champion Wladimir Klitschko (62-3, 52 KO’s) defends his four heavyweight titles against Kubrat Pulev (20-0, 11 KO’s) in a scheduled 12 round contest being billed as the “Showdown in Hamburg”. The titles being contested are the IBO, IBF, WBO, and WBA Super World.

For Klitshcko, the bout is the first in what’s being reported as a three fight deal with HBO. This a big step for the champion, as he went a stretch having his fights only U.S. broadcast on EPIX, a subscription based channel with limited availability. The contest was originally scheduled for September, but was postponed when Klitschko suffered a torn bicep during training that required four weeks of recovery. The bout will be broadcast live at 4:45pm U.S. EST.

Klitshko has had a dominant run in his second stint as the division’s top dog. This will be his 17th consecutive defense overall in his second reign as champion, in addition to the five defenses of the WBO title he held in his first run from 2000 to 2002. A change in style following a pair of knockout losses in 2003 and 2004 has allowed him to be nearly untouchable over the last 10 years. Under Emmanuel Steward, he’s become a skilled, technical fighter that mounts his attack behind a strong jab while carrying the stopping power in his right hand. His controlled aggressiveness allows him to dictate the pace of his fights without losing sight of his defense; you’ll never see him rushing an opponent or swinging for the fences regardless of the situation. If he can get an opponent in trouble, a sharp measured attack will follow.

Kubrat Pulev is one of the better opponents to face Klitschko in recent years. He’s an accomplished amateur who’s won gold medals at both the European and EU Championships and represented Bulgaria in the Olympics. Like the champ, he fights smart, is a physically strong fighter, and matches up well in height and weight. Where he lags is in experience; Klitschko has three times the contests and nearly three times the rounds of Pulev, and he has faced the better opposition overall while fighting on a far bigger stage than the challenger.

There’s little mystery to Klitschko’s approach the fight; he’ll work off the jab, using his reach to keep the challenger at a safe distance, looking to tie up when the fight gets in close. The question with Pulev, is does he have the movement and speed to get inside and score anything meaningful? Past opposition has come with that plan in mind, but have found it much more difficult to execute when the fights under way. For every opponent that’s been predicted to give him trouble, Klitschko’s made easy work of each one, maybe Kubrat Pulev will be the one to make the game plan work.

[Update: The IBF title, alone, will be on the line for this bout since Pulev has only agreed to pay sanctioning fees to that organization, where he is the no. 1 ranked contender.]