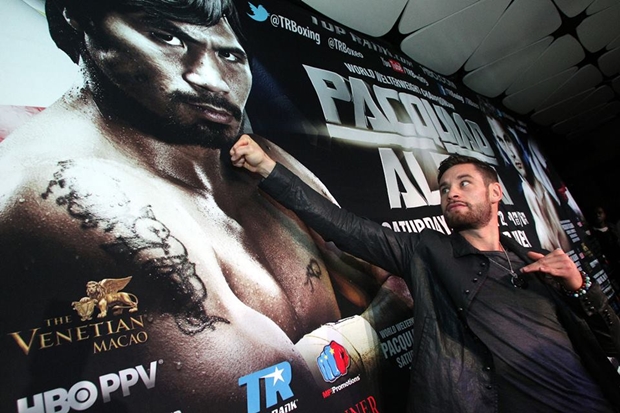 Bob Arum is the undisputed king of promotional chicanery and matchmaking sleight of hand, but he is trying to top himself with the upcoming November 22 bout between Manny Pacquiao and Chris Algieri in Macau.

For the first time ever, a main stage pay-per-view prizefight is being marketed directly to those who really don’t know much about the actual sport.

Arum and his team have been extra busy in the weeks and months leading up to this bout, doing their best to hit the mainstream press hot and heavy with Algieri hype. Features in Newsday, The New York Post, the Los Angeles Daily News, and several other local and regional newspapers have put the narrative into the hands of lifestyle reporters and non-boxing sports correspondents, something quite different than what happens in the build-up to other big fights.

Even some select boxing media people have resorted to talking around the hardcore fans, aiming their words for the casually-interested observers behind them.

For instance, there’s HBO’s Max Kellerman and his overwrought insistence that Algieri had nothing handed to him and definitely earned his way to a shot at the very top. There’s also veteran boxing writer and BWAA member, Jerry Izenberg, who penned a cringe-worthy piece of propaganda for the New Jersey Star-Ledger describing Algieri as “a breath of fresh air in the eye of a hurricane of folk myths” and then, without the slightest hint of irony, insisted that the fighter was never “the product of a propaganda machine.”

This mainstream push has been an amazing example of media manipulation and flat-out lying, painfully obvious to those of us actually “in the know,” which, in this case, is just about everyone with any sort of working knowledge of the sport.

Per mainstream narrative, Algieri is a small-town, family man, chick magnet who ponders molecular compounds in his spare time and goes around with a perpetually wise perspective on everything.

That’s fine and true to a point, I suppose, but then comes the actual re-writing of history.

To those who don’t know any better, he is suddenly being billed as an aggressive boxer-puncher despite being closer to Paulie Malignaggi than Antonio Margarito in the ring with only eight career knockouts in twenty professional bouts.

Algieri’s split decision win over Ruslan Provodnikov, which 54% of the media saw Provodnikov winning, is painted as a battle of attrition where Algieri “broke” the aggressive Russian’s will.

At various points of the promotion, the Algieri narrative has had him pegged as the new Gene Tunney, the next Oscar De la Hoya, and hand-blessed by Sylvester Stallone as the real-life Rocky Balboa.

It has truly been a mad dash race against time to convince the non-boxing fan and/or casual observer that Pacquiao-Algieri will actually be something special and something above and beyond what the hardcore fan has already judged it to be– a tune-up bout for Pacquiao with a $70 price tag attached.

But you can’t blame Arum for trying this sales tactic. Once he invested his time and energy (and money) into the bout, he had to figure out a way to market it. Algieri was a roll of the dice for Top Rank after their last Macau PPV, featuring Manny Pacquiao against Brandon Rios, tanked as bad as anyone could ever imagine a Pacquiao PPV tanking, with just about 475,000 buys.

With most “boxing people” puzzled as to why this fight is happening at all and none but the most generously optimistic giving Algieri any chance at the upset, the sales job has to be aimed at the less informed.

To most real fans, just the actual signing of the bout was seen as something close to madness because of the fact that Algieri’s resume is so thin and his star so fragile when compared to many other fighters within his same weight range.

Even Pacquiao and Freddie Roach were puzzled as to why Algieri would get the nod and they said as much in the first press conference of the bout, only to have their statements wiped clean from the public record and replaced with more promotion-friendly talk immediately after.

In an unusually honest press conference moment, both Pacquiao and trainer Freddie Roach questioned Algieri’s qualifications for such a high-profile match-up.

“It surprised me [Algieri getting the Pacquiao fight] because I actually think Ruslan won that fight. [Algieri] got beat up a little bit,” said Roach, who was the chief second in Provodnikov’s corner for Algieri’s upset of the tough Russian battler.

The article from an international news wire service, chronicling the news conference, hit the ‘net August 25 in the middle of the night (U.S. Time) and was prominently displayed on several mainstream news sites, but more importantly, by the widely-viewed Yahoo! Sports boxing section.

By the next day, though, “Boxing legend Pacquiao dismisses Algieri threat” had been replaced in its position of prominence by “Pacquiao ‘impressed’ with Algieri; Roach says he won’t underestimate opponent again,” a story covering the exact same press conference, but telling the exact opposite story.

“Chris Algieri fought an exceptional fight in June to win the world title from Ruslan Provodnikov,” Pacquiao now says in the re-write. “I am impressed and intrigued by his scientific approach to training and boxing. He may be the smartest and the fittest athlete I have ever faced and that makes him the most dangerous.”

Even Freddie Roach had miraculously changed his tone in this media second draft.

“I underestimated Algieri when he faced Ruslan Provodnikov in June but I won’t make that mistake again,” now said Roach. “Algieri is going to face the best of Manny Pacquiao because Manny is going to have his toughest training camp ever. I am looking forward to a great fight and Manny’s finest hour on November 22.”

So, what the hell gives?

In the few hours between version one and version two of the Macau press conference, Top Rank had issued their press release to media, highlighting all “pertinent” quotes while doing all the subtle brainwashing press releases are supposed to do. And surprise, surprise, when push came to shove, Yahoo (and most other sites) erred on the side of Top Rank propaganda. The less flattering, “Algieri is just okay” got buried in favor of the “Algieri is my toughest foe” article.

But for some reason, Bob Arum has had his eyes on Algieri for a long time, thinking that a star could be made with the raw material possessed by the Huntington, NY fighter.

“The fight that I’m going to try and zero in on and put together is Pacquiao vs. Algieri, after Chris beats Provodnikov on June 14th.” — Bob Arum

Before Algieri-Provodnikov had even begun, Arum had wished aloud for Algieri-Pacquiao. And after the upset, he quickly hammered out a deal with Algieri’s co-promoters, Joe DeGuardia and Artie Pelullo to make the fight before Algieri’s blown-up eye even had a chance to heal.

But just taking Pacquiao-Algieri at face value as a legit prizefight, one can’t help but call a spade a spade and proclaim it a pretty cynical and insulting exercise in wasting everyone’s time.

And the dishonest, disingenuous media push behind it is even more problematic as new fans are brought into the mix, only to be treated as marks and hustled for a one-time $70 hit.

The only thing that can save this Saturday’s Pacquiao-Algieri card is a Pacquiao return to pre-born again form via one-sided bludgeoning of Algieri or some unthinkable Algieri performance that defies every bit of taped evidence we have about him.

I’ve been accused of being a “glass half empty guy,” but I sincerely hope that this fight is more fight than hustle, I really do.

You can email Paul at paulmagno@theboxingtribune.com or merely hurl catty insults at him via Twitter. Oh yeah, and  buy his book: Notes from the Boxing Underground! Paul is a full member of the Burger King Kids’ Club, a born iconoclast, an ordained minister in the Universal Life Church, and the original “Ding-a-ling Man.”