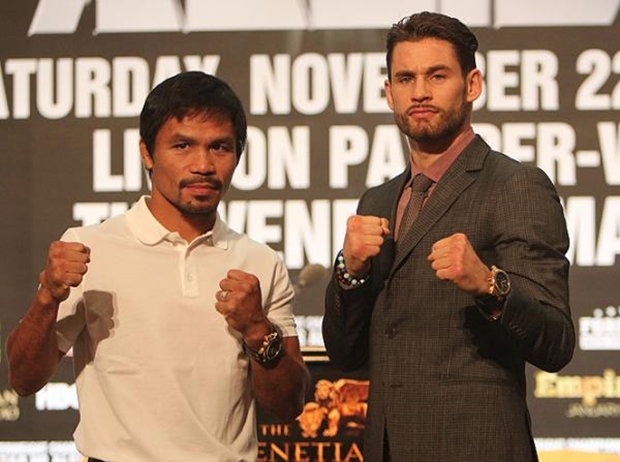 The verdict is “Manny Wins” by a margin of 9-0 among the Boxing Tribune Staff with most feeling that Pacquiao will stop Chris Algieri. However, the reasoning behind the votes is all over the place and worthy of a read. There’s even one staffer who thinks Algieri may be cheated out of a rightful win.

On paper, there are a couple of things about Chris Algieri that could give Manny Pacquiao problems. Height, movement, and reach are legitimate factors in Algieri’s favor, but, again, only on paper. Algieri does very little with any real impact, essentially, even at the club level, doing just enough to win. This is a smart, economical way to approach prizefighting, but hardly a mindset applied by those with greatness in mind. A huge flaw in Algieri’s game is that, for a defense-minded fighter, he gets caught with a lot of big punches. This can be attributed to a real hitch in his ability to switch from defense to offense and back again. Unfortunately for him, Pacquiao just happens to be about the best in the world at exploiting fighters with that particular weakness, just ask Miguel Cotto, Antonio Margarito, and Joshua Clottey. Unless Pacquiao comes into this fight incredibly unfocused and undertrained, I don’t see him having much of a problem with Algieri. Pacquiao should break his knockout drought and stop Algieri early, maybe even as early as the second round.

Back in June, from media row at the Barclays Center, it looked as if Chris Algieri did just enough to survive his bout with Ruslan Provodnikov, not take home the title. And nothing in Algieri’s 20 fight career suggests that he has the pop to keep Manny Pacquiao honest enough to go the distance on Saturday, let alone win the fight. Unlike Provodnikov, the Filipino icon won’t walk straight forward—which plays into Algieri’s countering style—instead he’ll use his quick footwork to throw powerful combinations at angles. Because of this, the New Yorker should spend most of what could be a short night covering up and getting carved up. Pacquiao via fourth round TKO.

I’m a fan of Chris Algieri, and I’ve followed my fellow Long Islander’s career for some time, but he’s simply in over his head in this one. It’s not a question of heart, guts, determination, or preparedness because the WBO light welterweight champ is made of solid stuff; he’s just been pushed too far, too soon, and isn’t on Pacquiao’s level. Manny is light years ahead of Ruslan Provodnikov and once he hurts Algieri, he’ll do what Provodnikov couldn’t, and close the show. I find Algieri to be a much better fighter than many are giving him credit for and I want him to win, but what I want isn’t going to change the outcome. Manny Pacquiao by fourth round stoppage.

I agree with Freddie Roach that Algieri may be “in over his head.” If he hits and runs, Pac will run him down with a stalk, stun, and close scenario which, worse case, will end in a UD win for Pac Man .After all, Manny is not the much slower Provodnikov. If Chris unwisely engages, he will be stopped.

Predictions of a first round blowout are standard Freddie Roach braggadocio, but this could end up being the exhibition Manny Pacquiao’s management have been hoping for. Chris Algieri has an awkward frame, will be game on fight night and aim to exploit a fighter advancing in years, but this won’t have any Rocky ending. Algieri will throw lots of shots and use the ring to his advantage but Pacquiao will be able to cut it off in a far craftier and more expert manner than Ruslan Provodnikov did. Manny wins in the late rounds.

At first glance this fight looks like an easy nights work for the Pacman. Chris Algieri has really come out of nowhere to secure this fight, with his main claim to fame being a very dubious split decision victory over Ruslan Provodnikov earlier this year. If Manny starts this fight fast and catches Algieri early then this could all be over pretty quickly, however the challenger does have a certain awkward fleetness of foot about him which could cause Pacquiao some trouble if he is allowed to get into his stride. There have been some doubts in recent fights about Pacquiao’s legs and if Algieri is allowed to get onto his bike behind his jab then we could end up with a kind of fight which may be open to some different interpretations should it go the distance. Manny on points for me but he would do well to see what happened in the Provodnikov fight and take this away from the judges.

If I wanted to be “edgy” or just a complete idiot, I’d pick Algieri for the upset. In truth, I think there are only two ways Algieri can win this fight: Either the judging is shadier than the space under Kim Kardashian’s ass or Pacquiao suddenly turns into Muhammad Ali in the Trevor Berbick fight.

Since I think the fight’s not going the distance (Manny remembers the last time Bob Arum had a new toy to show off too, y’know), and since I think Algieri couldn’t knock Pacquiao out if you gave him Luis Resto’s gloves from the Billy Collins fight, this pick is easy. Pacquiao, by KO in the early to mid rounds…say, Round 4.

Has anyone considered and pondered the idea that Algeri only got the opportunity to face Pacquiao because of the pure fact that Freddie Roach also trained Provodnikov? That there was enough time spent watching film + 12 full rounds of live, ringside scouting of Algeri that Roach got cocky? I have and I do… And I think Roach and Pacquiao have been fooled into taking the bout.

I believe Algeri will considerably outbox and out hustle, a heavy betting favorite, Pacquiao. I believe his length, his constant movement and mentality will carry him to a victory. I believe it will be a close, competitive bout, with Algeri tallying point with activity while Pacquiao scores with his tenacity.

In the end, however, I think Pacquiao walks away with a controversial decision. In the post fight interview, Pacquiao will call out Mayweather while Bob Arum stumbles around the question, pointing the finger and blame at “Money”.

Chris Algieri will be in way over his head come the 22nd. A product of a suspiciously convenient confluence of circumstances, Algieri will find himself hopelessly outsped and out-gunned. I do believe that the Long Islander will find a few brief instances of success with his rangy jab in the early moments, but once Pacquiao dials in his aggression and footwork, it will be a brutal showpiece similar to De La Hoya – Pacquiao. Look for the Filipino to rearrange Algieri’s features and get his first stoppage victory since 2009. PAC by TKO8