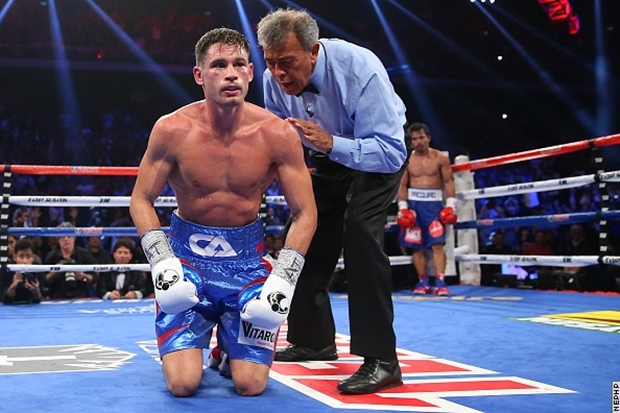 Manny Pacquiao is too much of a sportsman and gentleman to say it, but it was clear on Saturday night in Macau that he had zero respect for Chris Algieri as a threat. And why would he?

To a fighter like Pacquiao, who has, almost literally, done and seen everything over the course of his legendary career, seeing Algieri across the ring from him had to inspire more curious disregard than foreboding. Pacquiao knew what most informed fans knew. The future Hall of Famer would even make it known to anyone who would ask that Algieri was promoter Bob Arum’s selection– a distinction he never felt it necessary to make for other opponents.

Twenty fights into a pro career that had never seen a non-New York ring and with only one marquee victory that many still insist was no victory at all, Algieri got rushed up to the most elite of all levels as a bargain-basement roll of the dice by Top Rank Promotions.

Algieri would be a longshot at success for a Macau-based pay-per-view otherwise bound to be a tough sell. The good looking, well-spoken 30-year-old would be pushed hard and sold as something he wasn’t in the mainstream press and to casual sports fans. If the sales job was successful, the PPV show would do well enough to make everyone happy; If Algieri was successful in beating or even being competitive against Pacquiao, there’d be a new star born.

Unfortunately for Bob Arum and Top Rank, Algieri was nowhere near competitive. Time will tell whether the efforts to market the fight around the disdain of the hardcore fans was successful.

Most of us saw this coming from a mile away. There was nothing Algieri could do against Pacquiao and, as expected, he had zero chance all along. It doesn’t take a Masters Degree to recognize a no-hoper when you see one. Chris Algieri just wasn’t ready for this level of opposition.

Yet, Arum still saw fit to sell this fight to the masses and hope for a quick score at the expense of everyone involved.

Aside from the lost money of those who paid for the fight, we saw a legendary figure in Manny Pacquiao waste one of his last remaining fight dates. It could be argued that Algieri, despite a career-high payday, gained nothing from Saturday’s beating, either, cashing out on a young career with an upward trajectory for internet status as a walking punchline.

Cynical? Yes. But Arum may have been the only winner Saturday night and that, really, is always the plan when it comes to these big ticket shows these days, whether it’s Top Rank, Golden Boy, Mayweather Promotions, whatever. The real fan always comes second in boxing.

No sport so frequently and without remorse cheats its most loyal fans.

Boxing fans hang on to their love of the sport, almost desperately, exhibiting something closer to “Battered Wife Syndrome” than an intelligent consumer mindset.

A burger joint that advertises “The World’s Best Burgers,” but serves horse turds on a poppy seed bun would not stay in business long.

In boxing, though, the fans have been conditioned to live in the warmth of the hype and propaganda rather than wait for any actual payoff– because, most of the time, there is no payoff.

From Provodnikov-Algieri to the opening bell of Pacquiao-Algieri, the goal was to manufacture something that wasn’t there and sell it to those who, hopefully, didn’t know any better. The entire chain of events was textbook boxing flim-flam.

But, even now, with the clarity of hindsight, there’s still a mighty contingent of fans and media scrambling to justify the entire con job, from the very beginning.

Yeah, Yeah…Algieri earned his spot at the top with a clear victory over Provodnikov in an “eliminator” to face Pacquiao. So, there you go, there was nothing we could do about it. Pacquiao-Algieri had to happen.

Keep thinking that way and you can look forward to an endless line of bullshit shoved into your face because, with the right twists and turns, any narrative can be created for any fighter or boxing situation.

Blame the pushing of propaganda on the cheerleading boxing media, which always does its best to shill for the big guys at the fan’s expense. But, also, blame the fans, themselves, for the nasty habit of empowering the lies and media manipulation when it benefits their own personal favorites.

Fans who cling to the illusion and fantasy given to them regarding their own pet heroes, facilitate the propaganda machine. And if you’re going to feed the beast of spin doctoring sometimes, you might as well just admit that the war for the truth is a lost cause. There’s no such thing as an honest media that only tells the truth when it suits your own purposes.

The willful ignorance and partisan boxing politics keep the fans from getting what they want and they keep the sport from generating the kind of reforms that it needs. This also ensures plenty of the continued “buy this crap now, because the good stuff is coming later” logic that has fueled PPV and premium cable events for the last few decades. (Here’s a hint for the poorly-informed– the “good stuff” almost never comes.)

The ebb and flow of my own online friends list will tell the tale of a fandom fickle in its own dedication to change. I’m an outlaw hero and a brilliant analyst when talking about the other guys; a vile, agenda-driven, rat bastard when poking holes into the mythos surrounding their favorites.

My only agenda in writing (and in establishing The Boxing Tribune) was to fight against this propaganda machine, with the understanding that things could change if a bunch of us were out there, fighting to get to the truth. At the very least, I hoped to add some perspective to the rumors, lies, and half-truths that routinely get pushed along as fact without ever passing a bit of independent scrutiny.

However, this goal has been harder to achieve than expected, in part because of the blow-back from fans.

While Pacquiao-Algieri is just one PPV event, one moment in time, it’s indicative of how the power brokers in the sport manipulate events in order to manipulate the fans.

Boxing’s most powerful people are laughing at us.

If you’re one of the chumps who bought into the entire lead-in and fake narrative involved in the making of Pacqiao-Algieri, it’s hard to make a case for you deserving anything more than contempt. You are part of the problem and the main reason boxing has been relegated to niche sport status.

You can email Paul at paulmagno@theboxingtribune.com if you like. He really does answer all of his mail. You can also buy his book, Notes from the Boxing Underground! Paul is a full member of the Burger King Kids’ Club, a born iconoclast, and an ordained minister in the Universal Life Church.