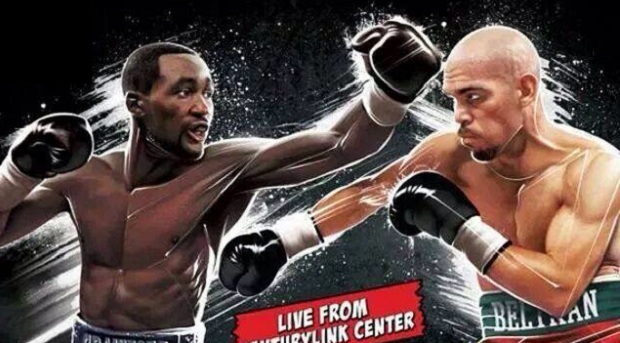 Twenty months ago, Terence Crawford was just another fighter working his way up the ladder, nineteen fights into his pro career and drifting from card to card finding fights to pay the bills.

Club fighters, like Crawford was in the very beginning, usually drift along, fattening up their record until some big shot comes calling, looking for a sacrificial lamb with a good record in order to pad a “real” prospect’s resume.

Occasionally, though, a club fighter surprises and makes it all the way to the very top, against all odds and with very little matchmaking hocus-pocus.

Such was the case with Terence Crawford, who came from the non-hotbed of boxing, Omaha, Nebraska and had a solid, but not stellar, amateur career. After toiling away for three years on the pro-circuit, he was signed by Top Rank Promotions in 2011 and given career direction.

With the signing, Crawford went from fighting at night clubs and minor league baseball parks to casino undercards headlined by the likes of Kelly Pavlik, Brandon Rios, and, ironically, Yuriorkis Gamboa.

In March of 2013, he beat his first “name” opponent, impressing wildly against heavy-handed Colombian Breidis Prescott. The one-sided decision on the Brandon Rios-Mike Alvarado II undercard was especially impressive since Crawford came in as a last moment replacement for Khabib Allakhverdiev, fighting in his first ten-rounder and at the higher-than-normal weight of 140 lbs.

Crawford drew comparisons to Pernell Whitaker from the HBO announce crew that evening and continued to impress in subsequent next-level fights against Alejandro Sanabria and Andrey Klimov later that same year.

Still untested in truly deep waters, though, it wasn’t until 2014 that Crawford went from “promising prospect” to “world class player.”

Dazzling and dominating WBO lightweight champ Ricky Burns via one-sided unanimous decision in Burns’ home country of Scotland, Crawford earned his first world title in the toughest of all possible ways. His first defense was no walk in the park, either, as he battled and eventually flattened Cuban star Yuriorkis Gamboa in nine rounds just three months later.

Now, the WBO lightweight champ with a record of 24-0, 17 KOs is set to make his second title defense this Saturday, November 29 against another tough challenge in Ray Beltran (29-6-1, 17 KOs) at CenturyLink Center in Omaha, Nebraska.

Mexico’s Beltran is best known for getting the royal screwjob treatment in Scotland against Ricky Burns just six months before Crawford toppled the Scottish world champ. Beltran would have to settle for a draw in a bout most observers felt was a decisive victory for the challenger.

The 33-year-old Beltran’s career has been an up and down affair as, like Crawford, an underrepresented club fighter living from purse to purse. It hasn’t been until the last couple of years that the native of Los Mochis, Sinaloa has hit his stride and made a name for himself as a legitimate world class fighter.

Aside from the Burns fiasco, Beltran has registered recent victories over Hank Lundy, Ji-Hoon Kim, and Arash Usmanee.

With solid fundamentals and a blue-collar toughness about him, Beltran has earned a spot as a Top 3 lightweight in every reasonable set of rankings.

Crawford, meanwhile, would make a very compelling Fighter of the Year case for himself if he can beat Beltran– and it would be the perfect award for a 27-year-old fighter just reaching his peak performance level and possibly ready to move up to another weight class.

To the boxing purist, Terence Crawford is a joy to watch– a well-rounded, technically-sound ideal fighter, who is showing himself to have some decent power in both hands as well.

There’s not much to dislike in the ring work of Crawford and there’s not much razzle-dazzle or mystery about his technique. He works in the classic American style, leading with the jab and working in a basic 1-2-3 that is accentuated by quick, fluid movement, superb instincts, and picture-perfect mechanics. About the only bit of showmanship in his game is his ability to switch from orthodox to southpaw. Defensively, he’s again a classic American fighter, using solid footwork and head movement to avoid punishment while always staying in position to return fire.

On the other side, Beltran is a pressure fighter at heart and will pursue his opponent, trying to get inside and grind him down with an upstairs-downstairs attack.

There’s nothing Beltran does exceptionally well on offense, other than gradually wear down an opponent with his come-forward style. A tenacious, dogged attitude is his greatest asset and the one which has paid the greatest dividends in each of his marquee performances. Defensively, Beltran can show some head movement, but usually doesn’t show enough of it, tending to get hit flush way too often. A strong chin is Beltran’s biggest defensive ally (he hasn’t been stopped since falling to Ammeth Diaz via fourth round TKO in 2008).

As for Crawford-Beltran– Both fighters will box true to form, with Beltran pursuing and Crawford moving while figuring things out.

By the fourth round, Crawford should have Beltran timed and sized up perfectly. A sharp jab and a straight left follow-up will be all the offensive tools Crawford will need.

By the ninth round Beltran should be banged up and hopelessly behind on the scorecards. The need for him to open up and produce more offense will leave him even more open for increasingly heavy Crawford counters. By the tenth, this one should be over either via TKO or corner stoppage. Then, Crawford will have the big decision to make– stay at 135 and try to clean out the division or move up to the deep waters of junior welterweight.