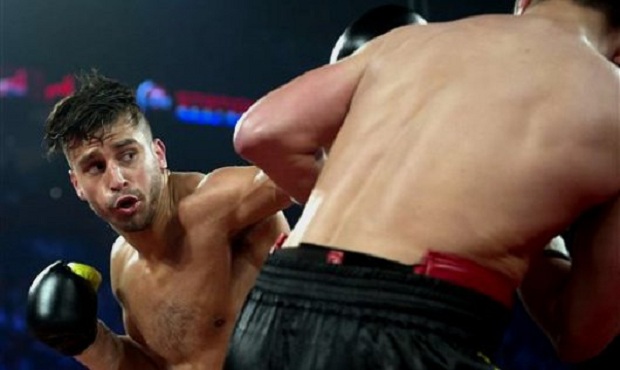 Fans were treated to two competitive rounds as a hard-charging Lemieux was met by a sharp-boxing Rosado. However, Rosado was sent to the canvas by a huge shot in the third that would lead to an ugly, quickly-closing left eye for the Philadelphia native.

The fourth round saw Round of the Year action as Rosado, sensing the urgency of the eye injury, fought back hard and managed to stagger Lemieux until a Lemieux counter would turn the tide, buzzing the comeback-minded Rosado.

From the fifth round forward, the bout settled into a repetitive groove of Lemieux pressing forward, landing solid shots against a Rosado, who boxed smartly in retreat, but was unable to launch any sort of tide-changing offensive push.

As Rosado’s eye got uglier and the scorecards grew increasingly one-sided, it became increasingly obvious that the commission was looking for a reason to stop the bout. Eye tests before the opening of the last several rounds and a “show me something” from the obviously concerned referee Steve Willis paved the way for the tenth round stoppage as Rosado looked to just be holding on, surviving at that point.

It was clear that at least two-thirds of this card was built around manufacturing a rivalry for network favorite Gennady Golovkin and that fact was confirmed as Max Kellerman, during the post-fight interview, pressed Lemieux about the possibility of a Golovkin bout. In response, Lemieux responded that he’d fight anyone at 160 and feared nobody. Team Lemieux matchmakers, though, would be wise to pursue the bigger revenue generator and lesser risk, Miguel Cotto, who holds the WBC middleweight title at the moment, or the significantly less risky IBF champ, Jermain Taylor.

On the televised undercard:

Hugo Centeno Jr. (21-0, 12 KOs) stopped James De la Rosa (23-3, 13 KOs) in the fifth round of a scheduled ten round middleweight bout. Centeno also scored a knockdown in the first round