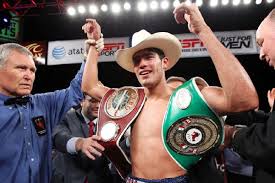 With 2014 quickly wrapping up, it’s time to look ahead to 2015.  On the prospects to watch series, I’ll discuss 20 fighters careers who I believe will make or break, their careers, in the next year.  Now, I do not believe these are the 20 best prospects in boxing, just the top 20 with name recognition, ability and potential to breakout in the upcoming year.

Savigne burst onto the scene with his 2nd knockout of Jeff Lacy. He hit Lacy so hard, Lacy claimed an opponent switch after the bout. He only fought twice in 2014 but he did claim the WBC Latino strap against Lacy.  He also previously held the WBC Fecarbox title at 175. At age 35, 2015 will be a make or break year.  He’s stated that he will seek bouts with Sergey Kovalev and Adonis Stevenson. We’ll see if that proves true.

J-Rock had a successful and big 2014.  The Philly native is trained by Stephan “Breadman” Edwards, a respected boxing writer.  Under Golden Boy Promotions, Williams stock is rising to extreme heights. Williams fought 3 times in 2014, including a televised fight.  He defeated the undefeated Eliezer Gonzalez by unanimous decision on Fox Sports 1.  He also defeated Michael Medina and Freddy Hernandez by knockout. Williams isn’t finished in 2014 yet, as he is scheduled to face Edgar Ortega on December 20th.  With a stacked list of young fighters at 154, Williams have positioned himself to make a statement in 2015.

Mike Tyson knows first hand about power punching prospects and he may have the most feared fighter in this group.  Vasquez’s star is shining bright after a stellar 2014. Vasquez Jr. fought 6 times in 2014, scoring 6 knockouts.  3 of the fighters were undefeated themselves.  He also claimed the WBC Fecarbox and USBA Welterweight titles.

With rumors of a demise of Iron Mike Productions, Vasquez Jr. could collect dust in 2015.  It would be a shame to see a talented, young fighter like Vasquez lose valuable experience because of promoter issues.

Alvarez is a chiseled specimen, knocking out opponents left and right.  He’s well conditioned as well, having gone 12 rounds already in his career.  Alvarez went 3-0 in 2014, claiming the WBC Silver title in the process.  He also holds the WBO NABA Light Heavyweight title. Alvarez defeated world title contender Edison Miranda in 2013.  With fellow 175lbs prospects Monaghan, Browne and Beterbiev, Alvarez may have to jockey for a spot as a contender in the Light Heavyweight division.

Top Rank may have their next big Mexican star in Sanchez.  Sanchez could be following in the footsteps of  Julio Cesar Chavez Sr. and Oscar De La Hoya.

Sanchez had a successful 2014, going 4-0 with 4 KOs.  He also claimed the WBO NABO International and NABF titles. He defeated respected veterans Giovanni Lorenzo and Fulgencio Zuniga in the process. Just when Chavez Jr. may be exiting, Sanchez may be ready to fill his shoes.  With Top Rank guiding his career, the sky is the limit.