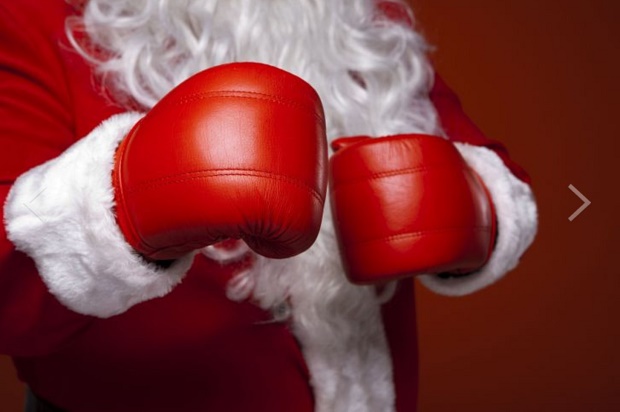 Hola amigos y familia, welcome to a balmy, 84 degree candy cane scented edition of Panama City’s highest grossing, most money spinning proper pugilistic paper, The Sunday Brunch – We are the boxing equivalent of Die Hard 1, Gremlins, Home Alone and National Lampoon’s Christmas Vacation all rolled up into one easy-to-digest fruitcake flavored mid-day snick snack. This week’s holiday edition will be tinged with previously pontificated December diatribes along with our Christmas wish list/psychic premonitions for the sport of boxing in the 2015 calender year. So, call me now – hold on to your jingle bells and don’t forget to leave a cookie for fake Santa, we’re about to spew hot eggnog out of our noses in a drunken stupor…With that being said, I gave you your instructions in the dressing room; what I say you must obey – Cuidate, escucha me, toca los manos y buena suerte…Let’s get it on!

Adonis Stevenson will finally face some of the other heavy hitters in the light heavyweight division. The Superman is indeed super, but he has been fed relatively lightweight opposition. Bouts with Sergey Kovalev or Bernard Hopkins will raise his net worth to fans outside of Canada – win, lose or draw.

Deontay Wilder will stop Bermane Stiverne and go on to face Wladimir Klitschko. The Alabama Black Snake will fare well in the early rounds, giving the ageing champion a run for his money with his size and strength. Klitschko’s years of championship experience will finally catch up with the former Olympian and Dr. Steelhammer will pull away in the latter half of the fight and give the Bronze Bomber his first defeat by way of brutal stoppage.

Andre Ward will still not fight anyone, but somehow will receive numerous awards and accolades for his in-ring accomplishments…from three years ago…

Everyone’s favorite mild-mannered hitman, Gennady Golovkin, will take on the Caguas Crusher, Miguel Cotto and Kid Chocolate, Peter Quillen. The Kazakhstani will truly set himself apart with these two signature wins (both by knockout). Finally, the hype will match the fighter and GGG’s high pound-for-pound ranking will be justified.

Yuriorkis Gamboa will move back down in weight to accept a challenge from the undefeated Mikey Garcia. El Ciclon de Guantanamo will reestablish himself as a dominant force in the division with a devastating TKO victory, earning the Mexican American’s WBO World title in the process.

Amir Khan, the pride of Bolton, England will at last grant a rematch to Argentine battler, Marcos Maidana, after a failed bid to square off against the sport’s top draw, Floyd Mayweather. Khan’s new light-hitting flurry style will not intimidate the ploddingly-aggressive Gaucho and Chino Maidana will turn the tables and win via unanimous decision.

After Marcos Maidana’s fantastic showing against Khan some 5 months prior, the stage will be set for an all Argentine showdown when Lucas Matthysse steps in the squared circle in a highly anticipated firefight. La Maquina will surprise his overly confident countryman with his speed and accuracy and Marcos Maidana will lose via TKO stoppage in the 11th round in what some will label the fight of the year.

The mega fight, the big one, the match everyone the world over has been waiting for will finally materialize. Manny “Pacman” Pacquiao will finally share the squared circle with Floyd “Money” Mayweather. The anticipation, the record breaking sales figures and the popularity the bout brings the sport will slightly fizzle in comparison to the fight itself – Though, fast paced, finger nail biting action will be just some of the buzzwords heard in the wake of the battle. Floyd Mayweather will be surprised early by the Filipino’s speed and angles – even tasting the canvas in a flash knockdown – but Mayweather’s accuracy and timing will offset the Pacman and will see him to a quite comfortable – wider than it appeared – points decision.

Thanks for joining us again this week, we’ll be back next Sunday with a New Year’s edition of everyone’s favorite quasi-food themed proper pugilistic paper. We’ll have a new hate mail section and perhaps another Boxing’s Best Memes will make an appearance. Here in the Sunday Brunch newsroom we strive to bring you the latest in cutting edge random catch phrases, dangling participles and run-on sentences. Send emails to JESSEBOXINGTRIBUNE@GMAIL.COM or pretend that we’re tight ‘IRL’ on Twitter @JESSEBOXING. until next time, sante.