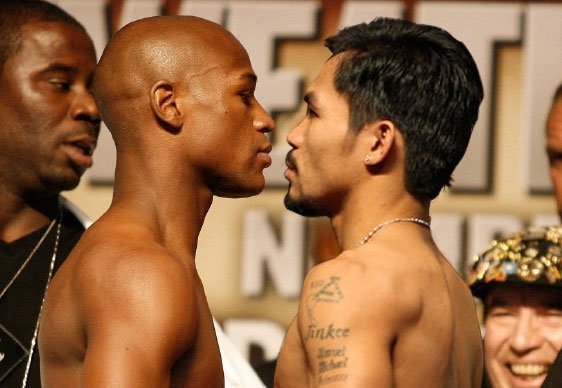 The renewed optimism in seeing the dreams of a Mayweather-Pacquiao fight a reality replaced the usual skepticism when Mayweather came out and said he wants Manny Pacquiao on May 2. This came after a month of media reports from Pacquiao’s team, and proved to be the catalyst to turn that proverbial frown upside down.

All of the pieces are fitting into place; Manny Pacquiao is emphatically calling for the fight and is more than willing (at least in the media) to concede to all of Mayweather’s demands, and if you believe Bob Arum, HBO and Showtime are working feverishly behind the scenes to come to a deal.

So why should you believe nothing you’re hearing?

Because we’ve seen it all before.

This isn’t the first time Mayweather has said he’s all in favor of making the fight. This isn’t the first time Bob Arum has gone to the press with vague details about ongoing negotiations (that were later revealed to be false). Manny Pacquiao has said he’d fight for charity, while scoffing at a reported $40 million offer before. And neither man has really been held accountable for their declining quality of opposition.

Since Mayweather’s September 2013 win over Saul Alvarez, he’s produced less pay-per-view buys in two fights than he did in his fight with Alvarez alone (no official numbers were released for Mayweather’s two fights with Maidana). And Pacquiao’s last two fights have done a reported (not officially) 475,000 buys (against Brandon Rios) and a number so low it hasn’t been reported (against Chris Algieri).

It has been reported that Mayweather’s deal with Showtime includes a purse guarantee of $30, and his reported purse minimum in each of his last two fights was $36. At $30 million, the break-even would be somewhere around the neighborhood of 1.2 million pay-per-view buys. Pacquiao’s team has countered the steady decline in his pay-per-view numbers by taking him to Macau, where the unregulated casinos will pay exorbitant fees and the boxing-hungry gambling degenerates will shell out to see Pacquiao fight anyone with a pulse.

And if you thought Team Pacquiao would come running when Mayweather said he wanted to fight Pacquiao on May 2nd, you probably haven’t been paying much attention the last  years. Bob Arum has already put the kibosh on May and has insisted on either April or June.

Making matters worse is the number of massive egos involved in the negotiations that would have to take place for Mayweather-Pacquiao to become a reality. And each ego is attached to a man with some form of rivalry and/or resentment for the opposite side. Floyd Mayweather and Bob Arum won’t be seen sharing niceties, following Mayweather’s Al Haymon-backed emancipation from his Top Rank contract in 2007, and Bob Arum and Al Haymon won’t be golfing 18 holes together any time soon. Furthermore, HBO and Showtime are bitter rivals jockeying for the hearts and minds of the same small group of hardcore boxing fans, and some kind of mutually beneficial agreement would have to be reached for a fight to take place.

Of course, there is also the possibility that Mayweather’s statements about wanting to fight Manny Pacquiao on May 2nd are genuine. It’s possible the suits on his team have given laid out the black and white in clear and plain English; that Showtime wants to actually make some money on the six-fight deal they agreed upon in 2013, and that any proposed opponent for May 2, 2015 not named Pacquiao will be turned down.

But it’s highly unlikely there’s a stipulation in his contract that states anyone but he or his closest advisors has any say in who he fights. Unfortunately, the winner between Floyd Mayweather and Manny Pacquiao won’t be decided in the ring – it will be decided in the media and in the court of public opinion.

Don’t get your hopes up, boxing fans. This is the sport we know, love, and hate. And it’s not going to change any time soon.