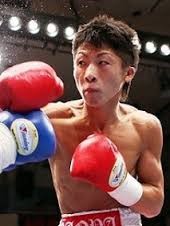 “I prepared different strategies for this fight, but when I saw him I just knew I am going to beat him,”—Omar Navarez

Even though 21 year-old’s record is just 8-0, the question can now be legitimately posed: is Naoya “Monster” Inoue a top 10 pound-for-pound fighter? In fact, does he deserve serious consideration for 2014 Fighter of the Year?

On December 30 in Tokyo, Japan, the “Monster” (who sports a 75-6 amateur career) had his way with the heretofore slick veteran Omar Narvaez (43-2-2) who had been viewed as the division’s best and has been among the more underrated fighters in boxing, but ironically the 39 year-old Argentine probably gained more publicity with this defeat than many of his below-the-radar wins.

Inoue, a high activity level fighter with numbing power, took the initiative immediately and the bout was almost over before it started. What promised to be a close thriller turned out to be a mugging as Inoue dropped Narvaez 26 seconds into the fight with a right hand which mostly appeared to hit glove, but had come following a cleaner shot. Then, 34 seconds later, Narvaez was down again courtesy of a left hook on the side of his head.

Though Navarez began to commit to his punches early in the second round, it was too little too late. Inoue carefully waited for an opening, and found it halfway into the round when he decked Narvaez a third time with a nifty counter left hook. After that, it was simply a matter of time before the slaughter was over and that occurred when Omar was floored a fourth time by a classic debilitating body shot –delayed reaction and all–with 20 seconds left. And that was that as Inoue suddenly emerged as a major force in two weight divisions (though aficionados have been watching him for some time).

Can Inoue now be mentioned in the same breath as Terence Crawford, Gennady Golovkin, Roman Gonzalez, and Sergey Kovalev? Many writers and observers say yes; some are going into a major swoon, but they miss the fact that streaking Japanese fighters have a distinct propensity to burn out fast. Still, a couple of more wins like this and I just might join the chorus.