Continuing from Monday’s Part One, here’s the second and final installment of The Boxing Tribune’s look at 2014’s Best, Worst, and Strangest in Boxing:

Fighter of the Year: 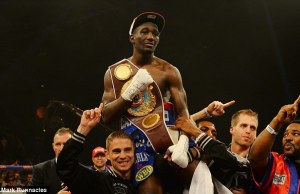 There has been some late resistance in giving the quiet kid from Omaha the honor he deserves, mostly because of Sergey Kovalev’s big win over Bernard Hopkins registering much higher on the Q boxing  rating scale than any of Crawford’s victories. However, between Crawford and Kovalev, it was only Crawford who could boast of two decisive victories against top-two ranked opposition and a third against an Olympic star/pound-for-pound talent. Kovalev’s victory over Hopkins may be the biggest win among the two Fighter of the Year candidates, but Crawford’s wins over Yuriorkis Gamboa and Ray Beltran trump, Kovalev’s maulings of Blake Caparello and Cedric Agnew.

Event of the Year: 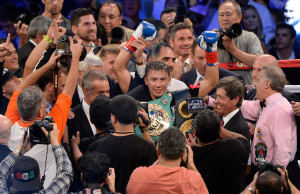 In October, a fawning West Coast boxing media received the genuinely compelling middleweight titlist Gennday Golovkin with open arms, legs, and orifices. Mexico’s Marco Antonio Rubio played the fall guy in a dubious StubHub Center battle that resulted in a dubious two-round KO. But the media came to anoint a middleweight star that night and nothing was going to get in the way of doing its appointed job. “Triple G” was a smash hit in California and worthy of continued bandwagon rolling in weeks and months to come.

Round of the Year:

Terence Crawford vs. Yuriorkis Gamboa (Round 9) 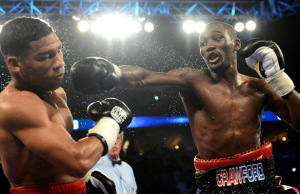 In one classic round, fight fans were treated to the reason why Terence Crawford deserves the Fighter of the Year honors and why Gamboa is still much more than an underachieving former pound-for-pound talent. Stunned in the middle of the round, Crawford battles back to drop Gamboa twice en route to a TKO stoppage.

Runner Up: David Lemieux vs. Gabriel Rosado (Round 4) 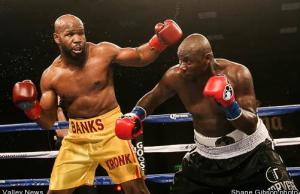 For the second straight year, Banks takes the award for doing nothing in a bout he likely could have won if even exerting the least amount of effort. In 2013, Banks went through the motions against a Seth Mitchell he had already knocked out five months earlier. In 2014, Banks once again offered no resistance in offering himself up to sacrifice for a pudgy and slow 46-year-old Antonio Tarver.

Upset of the Year: 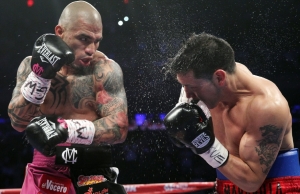 Thought to be too beaten up and undersized for even a past-his-prime Sergio Martinez, Miguel Cotto came into June’s WBC middleweight title bout as a clear underdog likely to be retired at the hands of his larger foe. Instead, Cotto utilized his hand speed in landing several perfectly-timed left hooks over Martinez’s trademark low lead right hand, scoring three knockdowns in the first round and putting himself up by at least six points before Martinez had even begun to regain his senses. From the third round forward, the quicker Cotto played prevent defense against a weakened Martinez, who was unable to generate any sort of real, sustained offensive surge against a smart and focused Cotto with a huge head start.

Robbery of the Year:

The Selling of Chris Algieri 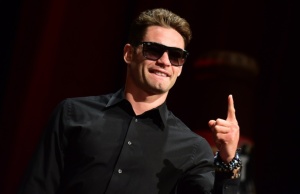 The outrage wasn’t so much about Chris Algieri, the actual fighter, as it was about Chris Algieri, the Top Rank creation fast-tracked into a big ticket PPV bout with Manny Pacquiao that he clearly didn’t deserve. Everyone with even a passing knowledge of the sport suspected that Pacquiao-Algieri would likely be a mismatch, so Bob Arum and his Top Rank promotions crew took their case directly to the boxing-ignorant mainstream media and began to paint a ridiculous portrait of Algieri as some sort of Renaissance Man boxing phenom chick magnet who pondered molecular science in his free time and was likely to give Pacquiao the toughest bout of his career because of his many atypical prizefighter attributes. However, not even the casual fans could be hoodwinked into buying this stinker as, reportedly, fewer than 300,000 households bought into this cynical promotion. Predictably, Pacquiao would crush the club fighting Algieri, registering six knockdowns en route to a one-sided unanimous decision victory– and a waste of everyone’s time.

WWE Moment of the Year: 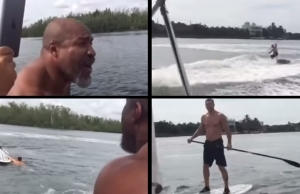 One of the oddest, most WWE-like moments came when former heavyweight titlist Shannon Briggs emerged from the pits of obscurity to stalk heavyweight champ Wladimir Klitschko in a series of video vignettes shared through YouTube and social media. Each involved the theme of Briggs interrupting Wlad at various personal and inopportune moments, screaming out things such as : “I go where you go, Champ or  I eat what you eat, Champ!”  The funniest vignette in the “Briggs Stalks Klitschko” series, though, has to be where Briggs shows up in the Florida waters where Klitschko is surfing and causes the angered champ to take a tumble in the water. Whether a set-up for a future manfufactured Briggs-Klitschko squash or not, this little series has provided some solid comic relief in a too-slow 2014. 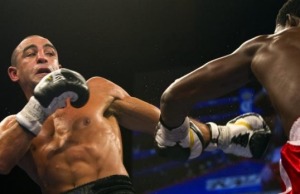 For the first half of Sam Soliman’s IBF middleweight title defense against Jermain Taylor, the defending champ was holding his own against the former titlist. Then, however, the 40 year-old’s previosuly injured right knee completely gave in and  forced the veteran Ausie to become a one-legged champ. Knockdowns in rounds seven, eight, nine, and eleven came as a direct result of a badly hobbled Soliman who could barely stand and was completely unable to generate any real offense of his own. Still, Soliman fought tough and hard until the very end and even managed to stage a bit of a comeback late in the fight. Scores of 116-111, 115-109, and 116-109 in favor of Taylor were accurate, but painted the proper picture of a close bout that likely would’ve been a Soliman win if not for the injury.

Runner Up: Orlando Salido (vs. Kokietgym and Lomachenko)

The “Hey, That Guy Works At Footlocker” Award:

This is The Boxing Tribune’s annual award given to the most pedestrian fighter who somehow finds his way on to a major network. Congrats on making your way to Macau against Manny Pacquiao on PPV Mr. Algieri! 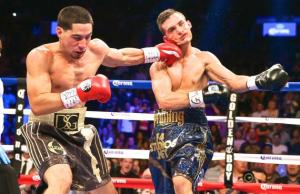 The most cynical mismatch made all year, Garcia-Salka was such a farce that not even the dirty, dirty hands of the WBA and WBC could find a way to sanction this one when it came across their desks. So, instead of a bout pitting the top junior welterweight in the world against the #71 ranked lightweight, Garcia-Salka would become a welterweight catchweight, even more to the oversized Garcia’s benefit. The result was a predictable mauling and eventual KO of Salka after two rounds of Garcia looking as though he were sparring his teenage nephew in his basement. 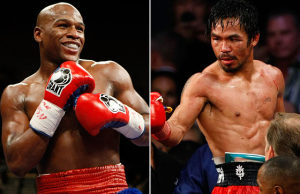 The Avatar All Style, No Substance Award: 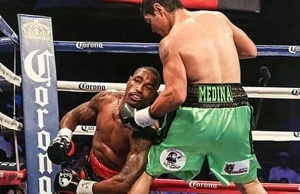 So far, The Money Team, the supposed extension of Floyd Mayweather’s boxing greatness, has been one great, big meh. 2014  was a typical year for the well-publicized crew of Mayweather gym bag holders as they alternated between looking flat, disinterested, and greatly fortunate for the company they keep. The highlight of 2014 came as an undeserving Mickey Bey scored an undeserved decision over Miguel Vazquez for the IBF light weight title. The lowlights were many, though, as Badou Jack, J’Leon Love, and Ishe Smith all sustained embarrassing defeats and ring indifference seemed to reign supreme across the board. However, they do continue to look cool in their TMT swag.

Mexican Fighter of the Year: 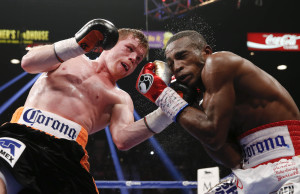 The 24-year-old Canelo Alvarez rebounded from a one-sided 2013 loss to Floyd Mayweather in the most positive of ways– by scoring victories over Alfredo Angulo and Erislandy Lara while reaffirming control over his own, still-growing fame and boxing empire. Alvarez would create headlines by deciding to move back to HBO from Showtime and essentially declare war on Floyd Mayweather over May and September fight dates typically associated with Mexican holidays, Cinco de Mayo and Mexican Independence Day. As of this writing a showdown with Miguel Cotto appears to be the most likely option for Alvarez’s next fight date.

Female Fighter of the Year: 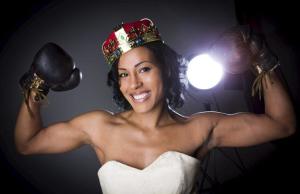 Per The Boxing Tribune’s resident female fight expert, Jim McGrady: “Boxing’s “First Lady” just gets better with each fight, and with every performance, she sets herself even farther ahead of the pack.  2014 saw Braekhus keep her undefeated record in tact with a 4-0 tally for the year while barely losing a round.  She made history in her win over Ivana Habazin, becoming the first female boxer to unify all four major world titles, bringing the WBA. WBC, IBF, and WBO welterweight belts all around one waist; her own.  In November against Jennifer Retzke, she fought the last six rounds with an injured foot and still swept the fight on two of the judges scorecards.  With professional boxing now legal in Norway, the excitement of finally being able to finally perform in front of her home fans may make 2015 an even better year for the champ.” 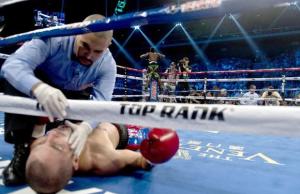 From The Staff at The Boxing Tribune:

Thanks for joining us in our quest to establish boxing’s first 100% independent source of boxing news and editorials. 2014 was an outstanding year for The Boxing Tribune– and one in which we more than tripled our readership.

This is truly a grass-roots effort, initiated by hardcore fight fans and intended for those interested in distancing themselves from the shills, fan boys, and scumbags so prevalent in the boxing media these days. All of the major media voices in boxing are subsidized by money from promoters and/or managers– We hope to change that. Our aim for the coming year is the continuing development of a news presence, as well as a move to venture into the deep, dangerous waters of longform journalism. We will also continue to fight to keep ourselves independent from the secret blogging societies, writers’ cliques, and old boy networks that currently bog down the public discourse in double-talk and meaningless fluff.

It is The Boxing Tribune’s goal to provide a home for independent thought, free of conflicts of interest. If you would like to support our site and allow us to remain free of ad money from promoters and network interests, please support our sponsors and/or donate to our cause. Thanks for reading and thanks for being a part of the movement!