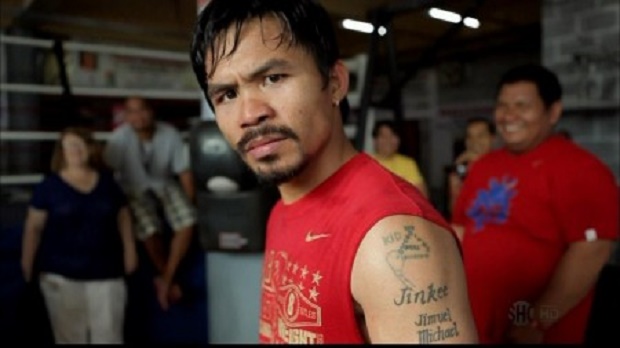 Hola familia y amigos, welcome back to a hot buttery croissant scented edition of the Philippines’ highest grossing, most money spinning weekly proper pugilistic paper, The Sunday Brunch – We are like the Shake Weight and Sweatin’ to the Oldies all rolled up in to one easy-to-digest dinosaur shaped boxing column-sized pill. This week we’re biting on all the rumors and listening to all the hearsay; we are formulating a game plan for one individual to change boxing history forever. Submitted for your approval and back by popular demand…these are the top Ten Things Manny Pacquiao Must Do To Defeat Floyd Mayweather! So, whip up a fresh batch of Sinigang and slice up some Sizzling Pork Sisig, we’re about to dance the skeleton of Bert Sugar all over the lobby of the MGM Grand! Without further hullabaloo, I gave you your instructions in the dressing room; what I say you must obey – Cuidate, escucha me, toca los manos y buena suerte…Let’s get it on!

When Floyd Mayweather fights, he generally takes a few rounds to adjust before he takes over the bout. Good examples of this are found in most of his last 10 fights, aside from Juan Manuel Marquez and Canelo Alvarez where their textbook boxing style was exposed rather effortlessly by Mayweather. Start fast and with power, swarm him early and don’t give him space to breathe.

You’ll need to infiltrate his space to be effective. Floyd Mayweather operates best at his optimal punching range and will often push off with gloves, elbows or forearms to get that distance when smothered. Get inside and make him uncomfortable– an off-balance fighter is an ineffective fighter.

By all accounts, you should be the quickest fighter that Mayweather has fought in quite some time – Maybe dating back to his 2006 bout with Zab Judah – where he unofficially touched the canvas. Take full advantage of that fact and work on speed with your trainer, Freddie Roach. He will have a solid game plan (if he reads this) and will want you to use your blistering combination punching and awkward southpaw footwork to offset Mayweather’s timing and speed.

Floyd Mayweather hasn’t fought a southpaw in a good long while…longer still if you’re not counting Robert Guerrero, as he wasn’t able to as much as graze the “Pretty Boy” in twelve lopsided rounds. Utilize your straight left and duck-to-the-right maneuver that made you so dangerous to the bigger guys.

You’ll need to put rounds in the bank early. As the “B” side to this mega-money-match-up, you’ll likely be at a disadvantage when it comes to the judges score cards. Utilize superior footwork, never stop throwing punches and don’t let him “off the hook” if you wind up hurting him against the ropes like you did to Oscar De La Hoya.

Mayweather’s confidence seems to be an issue with some of his opponents. Like Mike Tyson before him, more often than not, Floyd Mayweather can psychologically make a fighter begin to doubt themselves. Your confidence and ever-smiling presence might just be the wrench needed to halt any mind games that the pound-for-pound kingpin may try to employ. Don’t look for immediate revenge if hit hard, keep calm and wait for opportunities to pounce. A reckless firefight with Mayweather could spell disaster.

2. Be reckless, but not careless.

Against Juan Manuel Marquez, in the fourth battle, several factors led to your decapitation. Among other things, a false sense of confidence coupled with too much bravado led to your demise that night. With Mayweather you’ll seriously need to lay it all on the line, however, don’t punch without thought…At the same time you’ll need to punch without thinking. It’s a complicated thing to try and explain, but to a boxing savant like yourself, it should be clear – “Swim without getting wet”.

Floyd Mayweather’s defense will be a huge mountain to overcome – getting to his head will be a challenge that might take you most of the fight to achieve. Attack his body, arms and hips. When Saul Alvarez illegally punched Mayweather’s leg it really bothered him (so much so, in the aftermath on the All-Access Episode 5, his personal masseuse can be seen working out the pain). You’ll be given the benefit of the doubt, so take some cheap shots to get him off of his game, he likely won’t retaliate – just don’t hug him.

Thanks for joining us again this week, we’ll be back next Sunday with more random thoughts, pontifications and run-on sentences. We will have spells from Gandalf’s wizard book as well as several conjurations and hexes from the Harry Potter universe. ‘Friend’ the Sunday Brunch team on Facebook at Jesse Ian Lardies or pretend to add us on Twitter @JESSEBOXING until you get a follow back then delete us. Send all Flomo and Pactard hatemail to JESSEBOXINGTRIBUNE@GMAIL.COM. Until next time, sante.