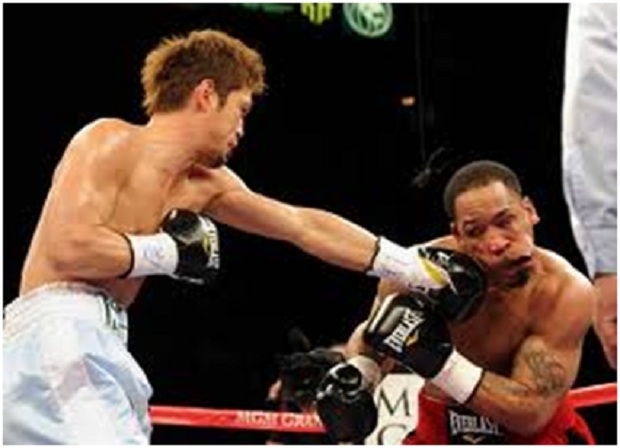 “Kirkland is supposed to beat the hell out of him.”—Max Kellerman

“This is such a shocking upset that we didn’t have a [translator] on hand tonight.” –Kellerman

James Kirkland (27-0) had been in jail from April 2009 to September 2010 and had scored two stoppages on his return to the ring. Although he was a bit rusty in both, he was starting to find his destructive groove. Nobuhiro Ishida (22-6-2) was meant to be just another safe win for Kirkland, who was heavily favored to win by a quick dismantling. To say that Ishida had the deck stacked against him is to put it mildly.

A sudden and stunning assault

Indeed, a quick, destructive dismantling did occur but not the one that was expected. With just 23 seconds into the fight, the biggest upset of the year began as Ishida shocked everybody and landed a short, crisp left jab to the chin of Kirkland. It somehow forced the “Mandingo Warrior’s” legs to wobble as he fell to canvas on all fours.

As Ishida celebrated the knockdown, Kirkland got back up, though he looked to be paying short and (for him) rare visit to Queer Street. Then, less than a minute after the knockdown, Kirkland was again hurt as Ishida let his hands go and soon afterwards Kirkland hit the deck for a second time. The crowd was silenced by this stunning turn of events as the “feather-fisted” Ishida had somehow found power in his gloves.

Kirkland again rose to his feet but a now confident Ishida knew he had him where he wanted him and rushed in looking for the close before Kirkland recovered. Kirkland tried to fight back but his shots lacked their usual strength and Ishida took them well. The Japanese then landed a beautiful flurry of straight shots.

The close came after just 107 seconds. A fearless Ishida managed to connect with a text book straight right hand counter that sent Kirkland on to the seat of his pants and down for the 3rd time. Referee Joe Cotez—being fair but firm– had seen enough and the upset mugging was over. In the end, the victor had been the intended victim and that is what made this shock and awe so special.