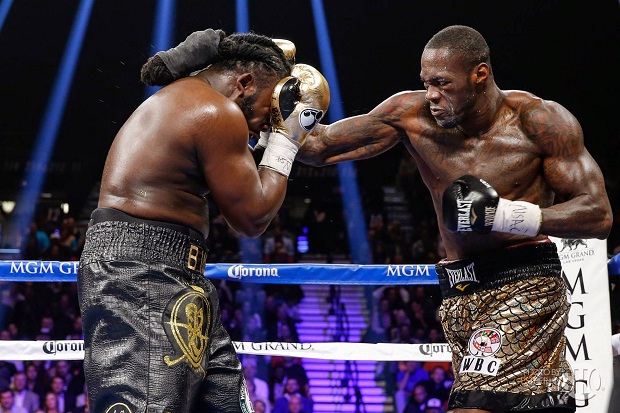 “I want to bring excitement back to the heavyweight division…And I don’t want to sit around. I want to fight four times a year. Whoever’s ready, I’m ready.” -Deontay Wilder

Many—probably most– will call for a match with undefeated Tyson Fury (23-0), but why unduly risk something you just won? Moreover, Christian Hammer might have something to say about this.

As for fighting Wladimir Klitschko (63-3), I say let the Doctor marinate a while longer before Wilder goes for the pot of gold at the end of the Klitschko rainbow. Wilder should settle in and fight some opponents where the risk-reward is in his favor.

1) The winner of the Tony Thompson (39-5) -Odlanier Solis (20-2) rematch—if it is made.
2) David Price has won 3 in a row and there could be some interest given his 6’8” frame.
3) Andy Ruiz Jr. has a 24-0 record and has replaced Chris Arreola as the best heavyweight out there with Mexican blood running through him.
4) Eddie Chambers has won 5 in a row all in the UK and all were in 2014. At 41-4, he might fit the bill.
5) For those interested in Klitschko benchmarks, Kubrat Pulev (20-1) and Francesco Pianeta (31-1) come to mind, but at this point, Alexander Povetkin (28-1) may present too much of a risk—with the emphasis at “this point.” Carlos Takem (30-2-1) would be safer.
6) The winner of the Vyacheslav Glazkov (19-0-1) vs. Steve Cunningham (28-6) match set for March 14. Cunningham provides a Tyson Fury benchmark
7) Ruslan Chagaev (33-2-1) is as tough as nails but would present little risk to the NEW Heavyweight Champion..
8) Manuel Charr (27-2) has several decent notches on his belt and, by extension, Wilder could claim them by waxing Char.
9) Mike Perez (20-1-1) is durable and skilled but also boring and presents minimal fan interest.
10) Bryant Jennings (19-0) will be 19-1 after he is crunched by Klitschko, but if he surprises and puts up a good battle, he would quickly be a very viable opponent. Don’t look for that to happen.

Wilder has now become the first undefeated American heavyweight champion since Riddick Bowe in 1992 and the first American champion since the aforementioned Briggs won the crown in 2006 by beating Siarhei Liakhovich with one second left in the last round. The 43-year-old Briggs later lost to Klitschko’s older brother, Vitali, in 2010 and took a horrific, career altering beating over ten savage rounds.

On some level, I’d personally like to see Wilder fight Briggs (now 57-6-2) and erase him from the boxing landscape. But if Briggs were somehow someway able to upset Wilder, a Briggs-Klitschko fight would suddenly become a mega fight. Stranger things have occurred.