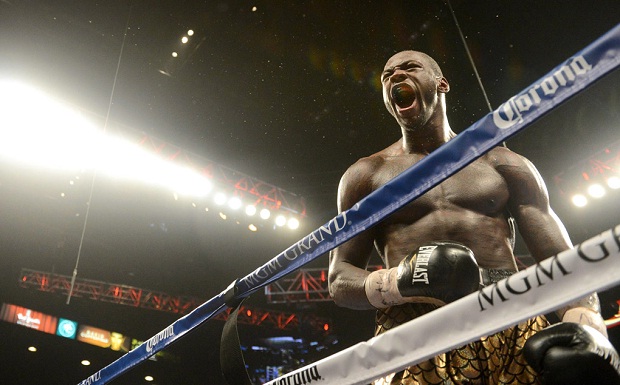 I take a lot of swipes at the bad guys of the sport in the Monday Rant and, really, that’s pretty much the reason the Rant exists at all. Consider it a change of pace from some of the usual opinion columns out there where grown men who know better pretend to be covering a sport like any other, where X’s and O’s always determine the winner and an entire subculture of hustlers have somehow, en masse, decided not to hustle anymore.

As such, consider the Rant a bitter little pill wedging perspective into minds poisoned by boxing media types who would rather assume a Pro Wrestling Illustrated approach to covering boxing, playing along with a game, even when they know it’s fixed.

But despite my focus on the sleazy and contemptible in this business, there is plenty of room for covering the good things and, in some cases, embracing optimism when the opportunity presents itself.

2015 is one of those years where boxing has a great chance to move itself away from the shadows and begin a push for great things. Not every year presents itself with so many possibilities for growth and reputation-changing movement, but this year is chock full of such opportunities that, unless intentionally splattered under the heavy footstep of boxing politics, can practically work themselves into happening.

Like it or not, having an American world heavyweight titlist is a big thing on this side of the pond. For many casual fight fans in the United States, the heavyweight division drives the sport and when the current, dominant world champ mechanically mauls his opposition on the other side of the world with little apparent regard for the American market, it’s hard to generate mass American fan interest. That’s bad for boxing.

Deontay Wilder is not the answer to this generation’s heavyweight cravings– consider him a more charismatic, slightly more athletic Michael Grant plying his craft in a much shallower talent pool. But Wilder looks good and is marketable enough to take to the top. His unanimous decision victory over Bermane Stiverne last Saturday night was hardly a top shelf exhibition of boxing ability, but it showed that he gets the game and his place in the game, at least to some degree. Be big, be strong, and be far on the outside against a chubby, big punch-minded aggressor.

The coronation of Wilder was the first sign of potentially big things ahead for the sport we love.

Expect Wilder to be shown off to the world in the May edition of Al Haymon’s NBC show with a token defense against some half-tomato can. Expect another gimme after that before being positioned for a huge money showdown with true heavyweight kingpin Wladimir Klitschko.

Even if he gets starched by Wlad– and he probably will– we’re talking 12-18 months of heavy hype and the type of publicity that actually reaches Sportscenter and the local daily newspapers.

Here’s another great opportunity for the sport this year. Eleven boxing shows will be hitting NBC airwaves, with five of them in prime time (and nine on the much smaller NBCSN). This could, literally, build an entire fan base around a set group of fighters and bring an entire wave of new, curious fans into a sport that so desperately needs this type of exposure.

Of course, it could also kill the relationship between network TV and boxing for at least another twenty years if the shows are dismal failures.

Expect Haymon and crew, however, to put everything they have into these shows, especially since they are self-funded events paid for from the pocket of Haymon, himself. The first three fights announced– Keith Thurman vs. Robert Guerrero and Adrien Broner vs. John Molina  in March; Danny Garcia vs. Lamont Peterson in April– do provide one with optimism that Haymon understands how important this is to the sport and to his future plans within the sport.

Haymon brings with him plenty of red flag issue regarding the way he does business, but you can say the same for almost everyone else running shows or managing fighters. For the time being, let’s settle for getting some exposure before digging into deeper issues.

Now, from American heavyweight coronation to March-April NBC buzz, how about all the increasingly confident rumors regarding Mayweather vs. Pacquiao?

Yeah, we’ve been through this before and you’d have to be a Grade A moron (or total newbie) to fully buy into any Mayweather-Pacquiao story until both parties confirm their actual participation in any sort of negotiations.

But more and more reliable voices are adding their thumbs up when asked whether this fight has a real chance of happening any time soon. More stories are emerging that, at least on some level, someone is talking to someone else and that’s a lot better than what has been happening for much of the last five years.

If the impossible does happen and Floyd Mayweather vs. Manny Pacquiao happens on May 2, it should go without saying what this would do for the sport. And each and every one of you– even the ones who stubbornly insist that you’ll boycott– will be watching intently with the entire world peering in over your shoulders.

Before the halfway mark of the year, if all goes well, boxing will be swimming in mainstream buzz before even taking into account a lot of the action already booked elsewhere, like Sergey Kovalev vs. Jean Pascal, Brandon Rios vs. Mike Alvarado 3, Gennady Golovkin vs. Martin Murray, and Wladimir Klitschko’s first US title defense in seven years. Also take into consideration the fact that true draws Saul “Canelo” Alvarez and Miguel Cotto are still without dates and Andre Ward, after signing with Roc Nation Sports, is set to return as soon as possible.

A lively, highly profitable first half of 2015 could then set the stage for big things in the second half. Never underestimate the power of buzz and positive forward momentum on the decisions fighters (and their management) make. Could a high-flying Al Haymon be more ready to sign Adonis Stevenson against Sergey Kovalev after a successful half-year? Could the big fight atmosphere inspire Julio Cesar Chavez Jr. to work things through with Top Rank and face Carl Froch by the end of the year? Could Bernard Hopkins come back and begin yet another run of the impossible?

The possibilities are tremendous and the opportunities to do something positive for the sport seem to be falling right in line. Only someone intentionally trying to put the kibosh on the whole thing for whatever selfish reason could screw up this alignment of stars.

I guarantee that there is someone out there willing to ruin any or all of this if it gets in the way of his own bottom line. That’s just the nature of the beasts that run our sport. But let’s just hope that, at least this one time, everything falls into place and we can show the world all of the best our sport has to offer.

You can email Paul at paulmagno@theboxingtribune.com or simply call him names on Twitter. Paul is a full member of the Burger King Kids’ Club, a born iconoclast, and an ordained minister in the Universal Life Church.