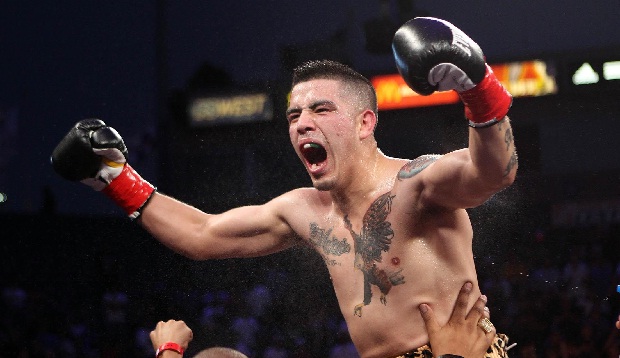 Eric Duran’s report from ringside of the HBO double-header:

Ramirez snoozes in showcase bout, nowhere near the level of Alvarez and Chavez Jr at this point in their careers

Vlasov comes out energetic as Ramirez is nice and calm, bouncing on his toes. Ramirez is throwing the straight left to the body in round 1. Ramirez is patient in his attack, picking and choosing when to fire at Vlasov.

Ramirez is going to the body during round 3. It is paying off as Vlasov is less reluctant to trade with Ramirez. Ramirez is opening up through the latter stages of round 3, firing off combinations from his southpaw stance. Vlasoz is showing signs of tiring in this heavy altitude of Denver, Co. Ramirez catches Vlasoz with a straight left hand, staggering Vlasov. A strong round for Ramirez as he is wearing down Vlasov with a constant attack on the inside.

The fists are flying in round 4 as both fighters are warmed up and ready for action. Vlasov landing sharp uppercuts on the inside as sweat tags ringside officials. Ramirez with a strong finish to round 3. The action is starting to heat up at the Broomfield Event Center.

And round 5 is quiet, zzzzzzz… Not much action to speak of as both fighters decided to take off round 5.

Ramirez is pressing the action in round 6 as he hears the boo birds in the crowd. It is an inside, tussle for position, type of fight in round 6. And the boo birds come out again as the end of round 6.

Ramirez is content to land 1 blow at a time, not showing the tenacity and fire power that came from his marketing team.

Vlasov is having trouble breathing entering round 10. Ramirez seems to have heard the boo’s from the crowd as he picks up the action. Better ending to the fight as the previous 8 or so rounds were a snooze fest.

On a windy Colorado day, Mike Alvarado and Brandon Rios met in a trilogy match, set to determine a winner after a 1-1 tie in 2 epic bouts. Alvarado is looking for validation, having lost 2 in a row since his last victory, against Rios. Rios, after cashing in but losing on the Manny Pacquiao lottery, rebounded with an ugly, disqualification win against Diego Chaves.

Alvarado steps through the ropes amid legal problems and a public execution from media pundits around the nation. The good thing for Alvarado is that he will have an abundance of fans cheering for as he fights just miles away from his hometown of Denver, CO.

As Rios walks into hostile territory, he does so with a strong contingent of fans in the arena. With lingering question from his previous performance, Rios looks to impressive his doubters in the ending to the trilogy.

The crowd erupts as the bell for round 1 begins.

Brandon “Bam Bam” Rios destructively puts an end to Mike Alvarado’s career at the top level. Rios is all action, winning with a thrilling performance.

Rios is lighting up Alvarado in the center of the ring with crisp uppercuts. Alvarado’s face is already swelling from the punishment of Rios. Alvarado drops Rios with a low blow. Rios continues to pressure Alvarado along the ropes, laying into him with every shot. Another big round for Rios as he punctuates the round with a straight right at the bell.

Rios is in command of this high action bout as they enter round 3. Rios is the busier of the 2, unloading on a helpless Alvarado. Alvarado looks shot as Rios drops him with an uppercut on the inside. Alvarado looks finished as Rios continues to bust that ass. Rios has stolen the energy of the fight and the crowd. Rios out lands Alvarado 52-4 in round 3.

Referee Jay Nady stops the bout before round 4 with advise from Alvarado’s corner. Alvarado’s hometown fans are booing him out of the building.

The writing was on the wall as Alvarado battled outside the ring issues as he entered the ring. Rios, for the most part, looked prepared and ready to finish the trilogy the way it started, with blood and guts. As exciting as it was for 3 rounds, it was a one sided affair in the favor of Rios.

With the win, Rios will continue making big paydays and exciting fights. He may never win the “big” fight but he will continue to be in exciting, crowd pleasing fights. His fan friendly nature of fighting takes you back to the hay days of boxing, leaving fans on the edge of their seats.

Alvarado is probably finished at the top level of competition, having dropped 3 fights in a row, quitting in 2 of them. No one can take away the fact that he was one of the fiercest competitors of his generation, losing blood for the sake of fans and glory. It’s sad seeing a hometown fighter lose on his guard, in front of his friends and family. However, the price of fame comes with shortcomings as well.