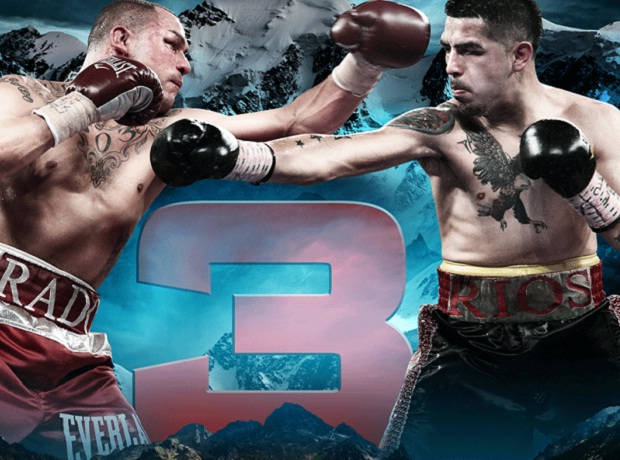 Marquez is backing ; Daranyi starches Marquez in the opening minute.

The opening minute sees both fighters exchanging jabs in Marquez’s corner. Daranyi catches Marquez with a picture left hook, draping Marquez between the ropes, out on his feet. Daranyi is your winner at :54 seconds of round number 1.

Marquez wakes up between the count of 3 and 4 before stumbling into the arms of referee Stephan Blea. Blea wisely waves off action.

Ramos “Much 2 Much” for the smaller Marquez.

Welterweight Jeremy Ramos breaks down and stops Rene Marquez in the 3rd round of a scheduled 4 rounder.

Ramos is counter punching effectively in the opening minute of the round. Ramos is able use his height and reach advantage, picking Marquez apart from the outside. A straight right hand down the pipe staggers Marquez. Ramos catches Marquez to punctuate the round.

Ramos is landing combinations to open round 2, lighting up the much smaller Marquez. Marquez is no match for the bigger Ramos just hanging tough and getting some rounds under his bout. Ramos continues to press the action as Marquez is starting to fade.

Marquez isn’t backing down in round 3 as both fighters trade combinations along the ropes. At 1:51 of round 3 referee Jay Nady as seen enough, stepping in and stopping the action.

Gvozdyk punishes Cummings, drops and stops his over matched foe.

Cummings, the underdog, comes out pressing the action. Gvozdyk remains calm and collected. Gvozdyk is picking up his pace, using pinpoint accuracy to keep Cummings at bay. Gvozdyk is landing accurate combinations in the center of the ring.

Gvozdyk comes blazing to start round 2, dropping Cummings moments in, Cummings beats the count to continue. Gvozdyk is looking for the kill, pinning Cummings along the ropes and dropping him again. A wobbly and shaken Cummings again rises only to be stopped with a right uppercut/straight right combination at 1:10 of round 2,

Both fighters come out eager to gain the upper hand in a scheduled 8 rounder. Clagget lands a crunching right hook to the body along the ropes. Ponomarez maneuvers away and begins boxing from the outside. Ponomarez is bouncing on his toes, circling Clagget as round 1 comes to an end.

Ponomarez switches to southpaw at the start of round 2, drilling Clagget with left hooks off the ropes. Clagget is basically walking forward, trying to smother and bully Ponomarez on the inside. Clagget catches Ponomarez with a straight right hand as Ponomarez pulls out. Both fighters trade along the ropes as round 2 comes to an end.

Ponomarez finding a grove in round 4, bouncing around and drilling Clagget from the outside. Ponomarez using head movement to nail Clagget with nice body shots. A nice round filled with action from both fighters. Ponomarez may be finding his groove just in time to take over the fight.

Clagget on the stalk while Ponomarez dances around the ring here in round 5. Ponomarez slipping and countering a flat footed Clagget. Clagget is staying busy but his landing percentage is dropping as Ponomarez is moving and countering, frustrating Clagget.

Clagget on the stick to begin round 6. Ponomarez picking and placing body shots onto Clagget from the outside. Not as busy of a round for both fighters.

Clagget catches Ponomarez with a beautiful overhand right to start round 7. Ponomarez switches to southpaw which hasn’t worked well with him all night. Both fighters exchanging body shots on the inside as the action has slowed over the last few rounds.

Both fighters are picking up the action in round 8 as the bout can hinge on this final round. Clagget staggers Ponomarez with a left hook in the corner, it may have won him the round and the bout.

We go to the scorecards. Judge Tyrone Short and Levi Martinez score the bout 77-74 while Judge Jeanie McEvoy scores it, 78-73 for your winner by unanimous decision, Konstatine Ponomarez.

Abner Lopez and Aik Shakhnazarian battled over 8 grueling and exhilarating rounds of action in the Jr. Welterweight division. Aik easily out boxed Lopez over the first 2 rounds as Lopez was content with following Aik around the ring. Lopez picked up the action in round 3 and by round 6, Aik had seen the canvass twice. Aik was able to continue as Lopez continued to press the action. Aik never recovered from the knockdowns or the constant pressure of Lopez.