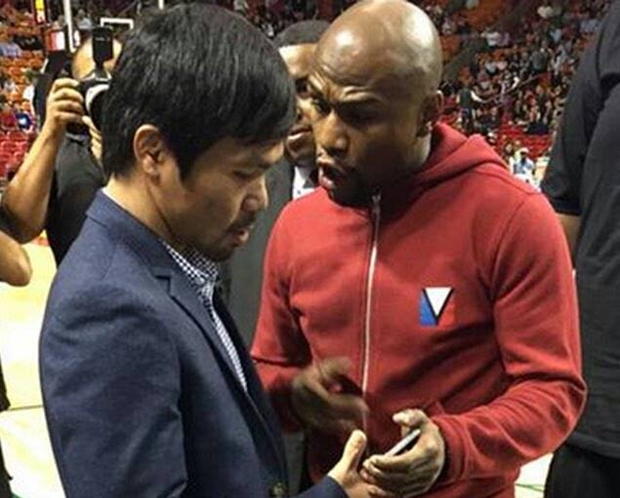 In a moment that would breathe life into the slowly dying possibility of a May 2 mega-fight, Floyd Mayweather and Manny Pacquiao met face to face at a Miami Heat game Tuesday evening and had a brief conversation at halftime.

What’s known definitively about this meeting is that Mayweather approached Pacquiao (and Pacquiao manager Michael Koncz) to initiate the conversation and that he gave Manny his cell number before the two shook hands and parted ways.

There are unsubstantiated reports floating about, though, that Mayweather confronted Pacquiao and Koncz on the “lies” being spread in the media and that the two passed the blame on to promoter Bob Arum. Some are also reporting that Mayweather intentionally changed his travel plans in order to attend the same game as Pacquiao would attend.

Meanwhile, Arum gave Boxingscene.com an interview earlier today, holding firm on the January 31 deadline he imposed on Mayweather to sign the contract– a contract that, by every account other than Arum’s, does not even exist.

Mayweather-Pacquiao negotiations are ongoing according to several sources, but a deal is far from being reached at the moment.