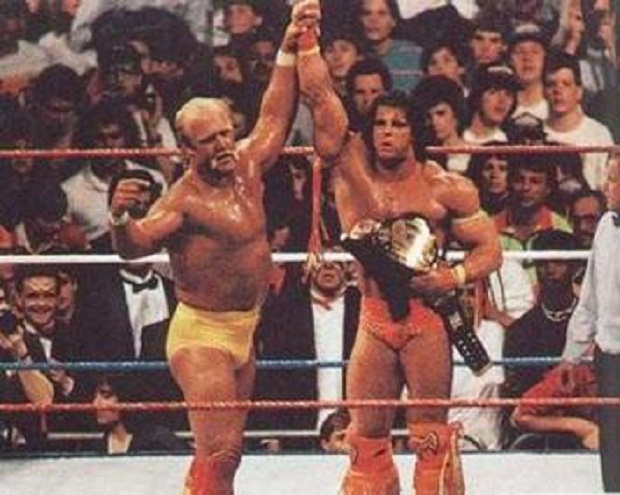 Last night WWE: Monday Night Raw rolled into my hometown of Denver, Colorado. As a youth, there was nothing better then Saturday morning wrestling. This was before there was a Monday Night Raw or Thursday Night Smackdown. A time when the WWF and WCW clashed like HBO and Showtime Boxing. It was the good ol’ days of professional sports entertainment, where athletes were bigger than life.

With the off and on again negotiations between Mayweather and Pacquiao continuing to flood mainstream sports feeds, watching WWE live took me back to a childhood match-up that was bigger then any Super Bowl or mega fight. On April 1st, 1990, Hulk Hogan, the World Heavyweight Champion, faced off with The Ultimate Warrior, The Intercontinental Champion at Wrestling Mania VI.

Hogan was your All-American hero, pleading with the youth to eat their vitamins and say their prayers. He was the good guy that young boys and girls looked up. With brash enthusiasm, he would grab the mic and speak to millions of Hulkamaniacs, including myself.

The Ultimate Warrior was the dark child, loved and hated by all. He hid behind a painted mask, full of dynamite running through his veins. And when he exploded from behind the curtains, with speed only seen in the 100yrd dash, fans erupted.

And when these 2 iconic figures met in front of 67 thousands fans inside the Skydome, the place erupted. The Ultimate Warrior with his trademark sprint and rope shake, Hulk with his methodical walk, finger pointing to the crowd, we haven’t seen a matchup between individuals of that magnitude since. As Warrior benched pressed the world from the top turn buckle, Hogan ripped off his trademark yellow shirt. As both towering figures met in center ring to hand over their respective belts, the barrier for sound may have been broken. As these behemoth of men slapped and body slammed each other, I watched, hopelessly rooting for the Hulkster. Would it end with a big kick/ leg drop? Or a shoulder press slam/splash?

It doesn’t matter that Warrior pinned Hogan to win the epic match, what matters the most is that the epic showdown took place. With contract talks between Mayweather and Pacquiao hitting a wall these past few days, I’m taken back to that day in my youth where 2 of my favorite athletes squared off.

It’s was a night I will never forget, just a young boy enjoying the show. I’ll admit, I cried when The Warrior pinned Hulk, it was as though my prayers were being crushed. Now, as an adult, with the 2 biggest athletes in my favorite sport on the cusp of signing off on the biggest sporting event of the new millennium, I’m reminded of why sports are important in my life. For the sake of young fighters and young boys and girls who watch the fights with their father and grandfathers, sign, seal and deliver us what we all have been patiently waiting for.