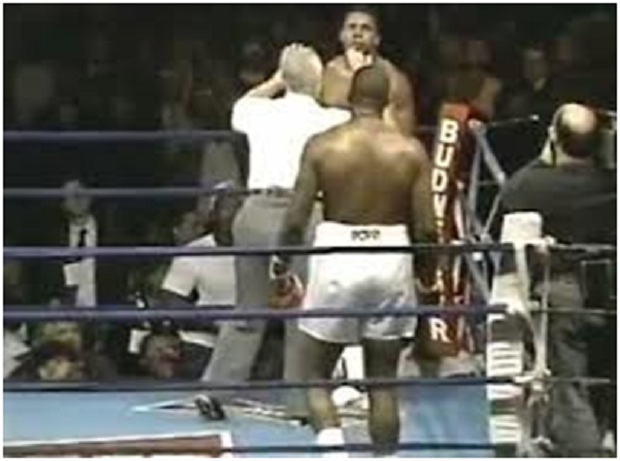 “He didn’t realize that he shook the water to awake the gator.”—Riddick Bowe explaining why he inexplicably punched Larry Donald during a press conference

If ever there was a real mugging in the ring, it occurred on October 29, 1991 at the Convention Center in Washington, DC when Riddick Bowe, aka “Big Daddy,” from Brooklyn, New York, fought Elijah “Phoenix Steel” Tillery, from Staten Island, for the vacant WBC Continental Americas heavyweight title. Bowe was undeafted at 26-0. Tillery was 23-4.

Tillery’s career was marked by no meaningful wins but he had a granite chin and decent skills. However, this televised bout was not about Tillery; it was designed to showcase Riddick’s superb talents and move him closer to a world title, not to mention acquisition of the vacant WBC Continental Americas Heavyweight title which for some reason was at stake. Instead, the fight turned out to be the first of many bizarre incidents that would mark Bowe’s subsequent ring career and personal life, though Tillery himself ended up serving a prison term, but that’s another story.

As for the fight, Tillery landed some decent early blows including a heavy body shot that rattled Bowe momentarily, but “Big Daddy” quickly gathered himself and shook up Tillery with a big right and then, after the two exchanged elbows, went on a sustained attack. Towards the end of a round that probably was much longer than three minutes, Bowe floored Tillery with a volley of malicious stuff punctuated by a left hook. After “Phoenix Steel” got up, Bowe landed a few more punches before the bell finally rang—and maybe one after the bell.

At this point, Tillery taunted Bowe and Bowe responded by flicking out a cheap- shot jab which in turn was answered by Elijah who let go with at least two kicks to Bowe’s groin and shin area (one of which may had landed). An unscheduled brawl ensued and ended when Bowe’s diminutive manager Rock Newman appeared out of nowhere and put a stranglehold on Tillery from behind while Bowe pummeled Elijah as he disappeared from sight over the sagging ropes. The well-coordinated tag-team effort gave new meaning to “a manager having his fighter’s back.” Meanwhile, overweight referee Karl Milligan appeared helpless and even hapless as the strange events unfolded.

Tillery was disqualified for the kicking, much to the loud chagrin of the crowd and the surprise of the television announcers. The two men fought again a few months later with Bowe scoring a dominant four-round TKO victory in Atlantic City.

Ted Sares is a private investor who holds a PhD in Business Administration and enjoys writing about boxing. He is a member of Ring 4 Boxing Hall of Fame (New England) and a member of Ring 10 (New York). He is one of the oldest active powerlifters in the world and competes throughout North America under the auspices of the RAW, USPA, and the Elite Powerlifting Federations He is the 2014 EPF Nationals Champion in the Grand Masters Class.
Related ItemsJoe GattiJohn MugabiTerry Norristop
← Previous Story What If’s Excellent Heavyweight Adventure Part 15: Strategy Not Included
Next Story → Rios-Alvarado: The Eulogy