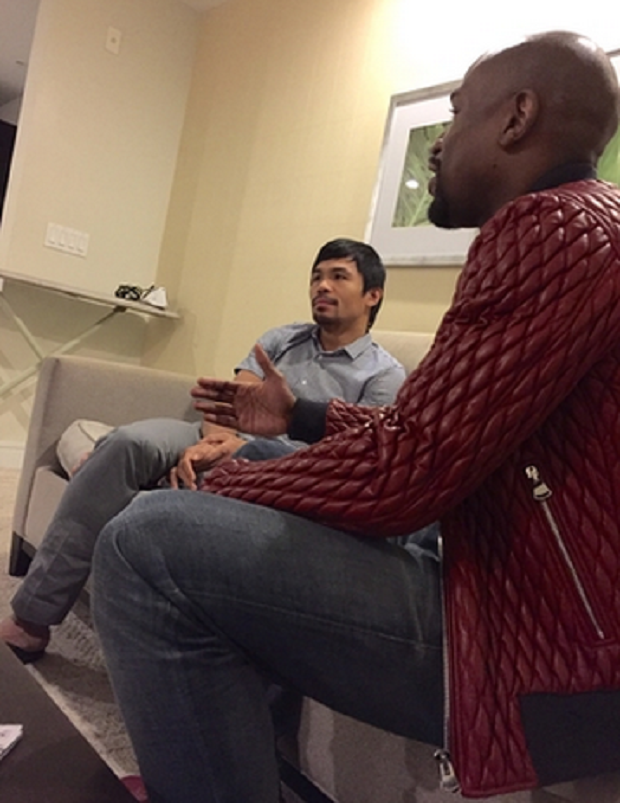 Holy amigos y familia, welcome to a lemongrass, coconut milk and cilantro scented edition of Panama City’s highest rated boxing-centric weekly pugilistic paper, The Sunday Brunch – We are late 90s emo, hardcore gangster hip hop and straight up death metal all rolled up in to one easy-to-digest dinosaur-shaped mid-day snick snack. This week we were doing a little spring cleaning in the Sunday Brunch fabricated mailbag and we stumbled upon these unresolved fake emails. So, while you’re patiently waiting for AMC’s The Walking Dead to return this month, we’re about to sort through this nonsense. With that being said, I gave you your instructions in the dressing room; what I say you must obey – Cuidate, escucha me, toca los manos y buena suerte…Let’s get it on!

Now that some weeks have passed since your original prediction of the Floyd Mayweather-Manny Pacquiao negotiations and still no word, have you changed your stance? – Packie Manniao

Well, as I wrote several Sunday Brunches ago, Manny Pacquiao and Floyd Mayweather will indeed share the squared circle with each other. Several stumbling blocks arose, but I do believe that they are being sorted out at the moment. This is one that will likely miss the May 2 date, but if a contractual agreement is reached, you can bet that the tour and subsequent face-offs will be the biggest the world has ever seen – Just imagine the weigh-in! So, no, I haven’t changed my opinion, just altered the timetable slightly. As Bill Cosby would say: “Calm, calm…patience…”

What is a fight that you really want to see? – First Time/Long Time

Thanks for taking the time to write in. I really think that Andre Berto-Victor Ortiz 2 would be an amazing match up. Granted, Ortiz went from fighting four times in 2010 to twice in 2011 (one of those being a bank account booster vs Mayweather). He then took nine months off for vacations and came back to face (underdog) Josesito Lopez in a fight where he was winning, but had his jaw broken. Fast forward nearly two more years and he squared off against Brooklyn’s Luis Collazo for his third straight loss inside the distance. All that aside, Andre Berto’s unfortunate injury against veteran, Jesus Soto Karass and drug test failures, this is a fight that needs to get put together – And I do think that it will happen, late in 2015.

How do you feel about “The Pride of Bolton, AK”, Amir Khan calling out both Gennady Golovkin and Miguel Cotto on Twitter? Do either (or both) of those fights get made? – Kmir Ahan

Well, since the Brit’s hard deadline for a fight with Floyd Mayweather (that went completely unnoticed) came and went, it seems slightly comical that the longtime junior welterweight suddenly wants to face off against both the Caguas Crusher, Miguel Cotto and the Kazakhstan Cremator, Gennady Golovkin. One or both of these would be for belts and likely both would need to be at catch-weights. Not excellent fights in my eyes, but both men stop Khan. His new (ish) flurry based attack style isn’t that impressive to me and to be honest, Virgil Hunter isn’t on my best trainer list – especially after he was brainwashing Alfredo Angulo to think that he had a chance in hell against Canelo Alvarez – when he was clearly getting bombed back to the Stone Age. Long story short, no, these fights do not get made.

Who is the future of the sport once Floyd Mayweather and Manny Pacquiao retire? – Concerned Fanboy #38

Thank you for writing in with your concerns, Concerned Fanboy. I’d say that Vasyl Lomachenko’s plight will be extremely interesting to follow. The Olympian has a tremendous upside and will likely be the future of boxing for fans who want to see a true technician. The man hits on all cylinders with his offense, defense and accuracy – he can do it all. Guillermo Rigondeaux’s career is another to watch to its conclusion. He’s an incredible fighter with an unparalleled pedigree (except perhaps by Lomachenko) and has an amazing arsenal at his disposal. While the Cuban’s run will be short in comparison, both fighters are must-see TV.

Yes, I saw the footage. Less than 30 seconds of a one hour meeting was released by Mayweather of his meeting with Pacquiao in Miami, Florida. This clip appears to be an attempt at showing how serious the talks actually were, although, with such a short excerpt of a much longer conversation, it’s really hard to put it into context other than with what we were presented with. So, until Michael Koncz releases his unseen footage of the encounter, we’re left with what it was – not much. Still, the fight happens…this year.

What do you think about a fight between Carl Froch and Julio Cesar Chavez? Who will win?! Can you get some mota? – Culio Jhavez

Thanks for the email, no I will not get you any…The fact that Chavez was getting absolutely schooled by Sergio Martinez, but came back to nearly stop the Argentine in the final round shows that resolve flows in his blood. The fight would be fantastic in my opinion, in England or Stateside. The winner would be a tough call, Froch has an equalizer, but Chavez has the ability to wear fighters down with volume if he’s in top form. This is an interesting one and I am hopeful that it gets made (even though Chavez has a fight set for the immediate future).

What is your favorite cuisine/style of food to eat or cook (or both!)? – Ran Dafael

Appreciate your emails as always, Ran. I happen to really enjoy both cooking and eating Asian food, Chinese in particular (traditional specifically, Americanized occasionally). I also like making and eating Italian, Spanish, Mexican and French. Holler if you hear me.

Thanks for joining us again this week, we’ll be back next time with more dangling participles, run-on sentences and randomly configured catchphrases. We will have tips, tricks and codes for the Nintendo Entertainment System™ and the Sega Genesis™. In our next episode we’ll have astrophysicist, Doctor Neil deGrasse Tyson and Bill Nye the Science Guy live in studio! Send all hate mail and love letters to JESSEBOXINGTRIBUNE@GMAIL.COM or unfriend us on Twitter @JESSEBOXING. “Like” our food and cat photos on Facebook at Jesse Ian Lardies. Until next time, sante.