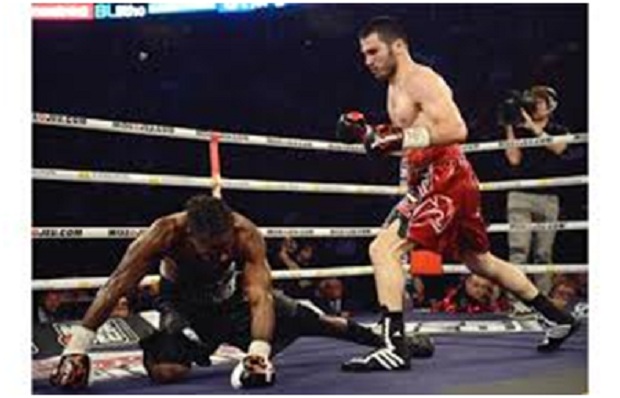 Most of the fights featured in this series have occurred a few years in the past, but this one happened recently and warrants top billing.

Artur Beterbiev (7-0) is yet another decorated amateur from Eastern Europe who competed at the 2012 Olympic Games as a heavyweight, losing to eventual gold medalist Oleksandr Usyk. The Russian mugger (who now makes his home in Montreal) was able to make the 175-pound limit for the first time and brutally assaulted former titleholder Tavoris Cloud (24-3) with four knockdowns in just over a full round of action, finally putting away Cloud early in the second.

The sudden attack began—as many sudden ring attacks do– with several crunching lefts followed by a right that decked Cloud. A left hook put Tavoris down again. Finally, a vicious volley sent him to the canvas for the third time and this time he was badly hurt and was saved by the bell. Most of this occurred with seconds left in the first round. The writing was on the wall. The end was near.

Early in the second, the rampaging Beterbiev ended matters quickly with a series of savage blows that left Travis flat on his stomach. Attesting to Beterbiev’s ferocity, Cloud had never before been down but this slaughter now puts his boxing future in serious doubt. Rumors had it that Tavoris may have suffered a broken jaw:

Beterbiev captured the vacant NABA light heavyweight title with the victory and then assaulted Jeff Page Jr.(15-0) on December 19, 2014, to add the WBO NABO light heavyweight title and vacant IBF North American title to his growing booty. Here it is: http://www.dailymotion.com/video/x26ryab_tavoris-cloud-vs-artur-beterbiev_sport

Beterbiev, who fights along the lines of his amateur nemesis Oleksandr Oleksandrovich Usyk, fellow-Russian Sergey Kovalev (whom he beat twice in the amateurs) and of course Gennady Golovkin, is sometimes confused with Beibut Shumenov who lost to Bernard Hopkins in 2014. For his own good, Hopkins best not make that mistake.

Methinks I’ll be writing again about this monster before this series ends, maybe after his fight with Gabriel Campillo scheduled for April4.