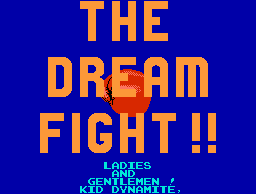 Welcome back to an encore for What If’s Excellent Heavyweight Adventure, where sometimes your columnist just wants to cut loose a little and have some fun. Everything you see here that I lifted from somewhere else is used for parody purposes only:

Previously, on What If:

Joe Louis won the Fight of the Ages against Ezzard Charles, unloading a miracle punch at the end of the fifteenth round of a fight he was losing on the cards. Equal parts Corrales-Castillo and Taylor-Chavez, Louis had shown himself the greatest heavyweight boxer of all time.

But his journey was not over. At the end of the quarterfinals, Don King had been revealed as the Devil himself, and along with the Grim Reaper had brought along Mike Tyson to issue a challenge to all in attendance:

“The winner of this fight gets me, and he fights for his very soul. He wins, and my friends here go back from whence they came. But if I win, darkness will reign upon the earth. My unholy lord and King will reign over the sport, and my opponent will not go back to his own time but will instead be turned into the Devil’s Champion to terrorize any who oppose his mad reign.”

It is with that in mind that Joe Louis, healed to the condition he was in before the fight with Charles began by the dark magic of arcane lore from the deepest pits of Hell itself, squared off against Iron Mike Tyson, himself imbued with Satanic sorcery beyond the wildest imagination of the entire discography of Black Sabbath played backwards.

Six seconds into the fight, Iron Mike uncorked a massive uppercut that split the guard of Joe Louis and sent him sprawling backward against the ropes, slumped over and facing the count. Louis rose, beat the count handily, and learned that blocking wasn’t going to do him much good.

At 0:18 of the first round, Louis first deftly sidestepped another uppercut from Tyson, but he simply couldn’t anticipate the one coming behind it, and once again he was thrown for a mighty loop, sitting on the canvas as Tyson looked on with murder in his eyes. This was not going well.

Finally, at thirty-six seconds into the bout, Tyson, having thrown nothing more than about five uppercuts and having landed only three, scored a TKO, as the referee, whose name was never revealed to the crowd but was an unknown Italian guy with a mustache, did not even give Louis the dignity of a count. The Dream Fight was over, as utterly unsatisfying to the boxing purist as it was terrifying to the crowd in attendance.

“You see your man is weak. You are all weak. Time for Joe Louis to get turned into a dark soldier of our Lord and King. You will all be slaves of our dark army. We will take over the world!”

Two men rose from the crowd. Standing six and a half feet tall and weighing close to 250 pounds each, muscled like they’d been brought in from Venice Beach or perhaps pro wrestling, one of them pointed a gloved fist at the man who had just so easily stomped Joe Louis and seemed to render months of athletic competition worthless.

Don King couldn’t help himself. “Look at the size of those Russians!” The Reaper corrected him: “Ukrainians, sir. Still Soviet, but they get touchy about that stuff over there.”

Said one of the Russian…er, Ukrainian men dressed for a fight: “Wait! Wait, wait, you motherfucker…we challenge you to a box-off. Give us one chance to knock your socks off.”

Iron Mike could only say but one word: “Fuck!” It was right there in the contract that binds the mortal plane to heaven and hell. No demon could decline a box-off challenge. “Who are you guys, anyway, and where did you come from?”

“Name’s Wlad, this is my brother Vittles, we came from 20 years in the future when we saw the world start to change and it wasn’t the world we expected. Got a little help from a guy who came in a time machine, calls himself Rasmussen, looks like Max Headroom. We’re here to fix the timeline and send you back from whence you came.”

“Fine, then. Step into the ring. If you win, we’ll honor the original agreement and go back to Hell. But if I win, Vittles comes back to hell to be Don King’s little bitch.”

Vitali Klitschko had his moment of doubt. “He fights too hard because he’s not a mortal man!”

Said Wlad: “Fine then. Nobody said it had to be a fair fight.” He then put his fingers to his lips and unleashed a piercing whistle, like a ground squirrel who’s just seen a dog in the park.

Out from the tunnel came familiar faces. Chuck Norris. Rocky Balboa. Mr. T. Arnold Schwarzenegger. Ivan Drago. Hulk Hogan, Randy Savage, and Andre the Giant…and with them all, none other than the goddamn Batman.

Before Tyson could react, the DJ running the sound system put on “The Final Countdown” as all eleven men rushed the ring, beat the living shit out of Mike Tyson, then smacked around Don King like they were trying to knock the evil out of him. With a goal like that, it was going to take multiple attempts, but every time he went down, someone dragged him up so they could beat on him some more.

Finally, and perhaps not quite kosher for a boxing event, Chuck Norris delivered a kick, like it weren’t no thing, straight to the crotch of Evil Don King.

The Reaper, seeing that Death needed a holiday, tried to beat a hasty retreat, but what he didn’t count on was that this Rasmussen fellow had brought insurance. After he delivered the Klitschko brothers to the arena, he’d gone back to the 12th century and found himself a medieval Master of the Hounds to lend him some war dogs.

With a knick-knack paddy whack, Rasmussen opened the cage, and the nastiest mongrels the Third Crusade could send forward in time all descended on the Grim Reaper, tearing him apart and each taking a femur or a humerus or whatever else they could get their teeth on, cracking the bones and sucking at the delicious marrow found therein.

Mike Tyson opened his eyes. “Where am I? My head feels ludicrous.”

Said Wlad: “You were possessed by a demon. We beat it out of you. You can see your puppet master over there, still unconscious. He wasn’t possessed. He’s just like that.”

“But…why? Why would you help me? I’m American. You’re from the Soviet Union. You’re the enemy, right?”

Vitali smiled and chuckled before taking the microphone so all in attendance could hear:

“If I can change, and you can change…EVERYONE CAN CHANGE!”

Hey, remember when What If was a self-contained episodic format, where there was one question that got answered with some speculative fiction? Well, have we got a doozy for you next week. To celebrate the signing of the Mayweather-Pacquiao fight for May 2, the next two episodes will answer a couple of questions from each man’s career.

Up first: What if Manny Pacquiao stayed at featherweight? Whether you believe Manny’s quest for multiple weight class titles was aided by some chemical engineering or if you just think the man would’ve been better off cleaning out a division that’s probably closest to his natural size as a fighter, the 126-pound division gets a “look out, we got a legend coming through” look at the last few years of history. Stay tuned.

Fox Doucette writes the weekly What If series and covers ESPN Friday Night Fights for The Boxing Tribune. His weekly opinion column, The Southpaw, appears on Thursdays. He’s a badly closeted nerd, and sometimes that comes out in the writing. Fan mail, hate mail, and requests for a complete list of pop culture gags and references can be sent to beatcap@gmail.com.