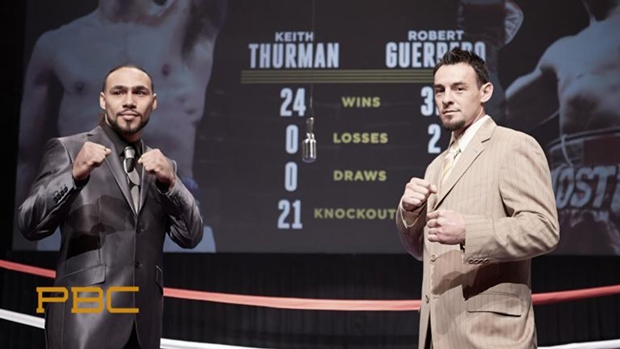 Keith Thurman and Robert Guerrero will clash in the classic scenario of top prospect meets veteran on Saturday, live from the MGM Grand in Las Vegas.

This bout is also the debut of Premier Boxing Champions (PBC) series that will also be aired on Spike TV and CBS. Thurman (24-0, 21 KO) has boxing talent, looks, personality and is poised for the next step in his career. Guerrero (32-2-1 18 KO) is a prime time hurdle to be crossed, and touts a resume of great competition. Former world title challenger and trainer Iceman John Scully breaks down the fight and the fighters, and gives his insight on the PBC and its role in bringing boxing back to the forefront of sports.

Scully recognizes Thurman’s role as a prospect, but doesn’t consider Guerrero his proverbial “step up”. “You could see it that way,” Scully said, “but I think for many fighters like Thurman, they have been boxing for a number of years and have been in the ring in the gyms sparring fighters who are better than the guys who they are supposed to be stepping up against.”

Thurman has benefited from experience many of his peers haven’t, Scully explained. “Keith has regularly sparred the likes of Chad Dawson, Winky Wight and Jeff Lacy so I think in his mind, with his punching power advantage, he’s not worried about many guys his weight right now. I’ve also spoken to Keith several times.” he continued, “and I’ve always, always gotten the impression and vibe from him that he feels this is where he belongs and that he has the goods. I honestly don’t think confidence is a problem and I feel like he will settle in quickly at any level.”

Comparing the styles of Thurman and Guerrero, Scully noted power and pressure in both their arsenals, and some subtle changes Thurman has worked into his game.

“Keith has been known mostly as a big puncher for the majority of his career,” Scully said “but I think he showed in his last fight that he has underrated boxing skills and a good mind for the game. He’s far from just a reckless puncher who goes for the knockout.”

Fans unaccustomed to seeing Thurman refrain from a firefight against Leonard Bundu might have been a little let down, and Scully addressed that issue. “I kind of think that in his last fight, because he showed lateral movement and boxing skills more than usual, that people thought he wasn’t as impressive and that was only because they expected more fireworks for him. On the flip side I think he showed himself to be more well-rounded. It’s all in the perception, I guess.”

In addition to keeping Thurman under fire, Scully believes Guerrero will also try to attempt a few mind games to get the upper hand.

“Robert will likely try and pressure Keith and bank on using that experience edge to get in his head,” he said, but Guerrero will also have to concentrate on what he can get away with, given Thurman’s heavy hands. “He will need to find out early on how well he can deal with Keith’s power,” Scully continued, “and if he feels he can eat the shots and/or move his head and counter well enough to stay in front of him then he will gain confidence and up the pressure even more.”

Thurman’s activity rate is a little higher than Guerrero’s which will help, but he will need to be aware of a potentially ugly fight. To avoid this, Thurman needs to follow the game plan from the Bundu fight.

“Keith will need to box much like he did in his last fight, really,” Scully said. “Set up his power with his double jabs and not allow Robert to get him against the ropes and suppress his power and leverage,” he continued. “Guerrero is good at, and used to, making physically tough fights work to his advantage,” Scully warned, “and I’m thinking that’s his plan here. I think he feels like if he was in the ring in those late rounds against Keith last time that he could have made something big happen for himself.”

Close scrutiny of Thurman’s last fight against Bundu could provide Team Guerrero some insight on how to secure a win, and they will be on the lookout for any errors he could commit.

“I would have to think that Robert’s team feels like they may have seen a chink in the armor last time out in Keith’s game,” Scully said, “and they will want to maximize the pressure they put on. They will want to take Keith’s leverage and distance away from him. Keep him close.” Thurman in return, Scully believes, will find success in keeping his distance. “I think Keith will want to keep his range and distance perfectly, just far enough away to let Robert’s aggression work against him and have him catching end of the punch shots.”

Predicting the outcome of Thurman and Guerrero, Scully acknowledges all Thurman brings to the table, but also realizes Guerrero is not an easy task at hand.

“I think it is a very interesting and potentially a very, very tough fight,” he said. “Guerrero has proven to be tough and resilient at the weight against some of the elite welterweights in the world while I know Keith has proven punching power and underrated boxing skills and I.Q.”

“I think Keith likely will be physically tested more than he has in any fight,” Scully said, “and will be forced at times to “dig down” and bring things back his way.” “Robert is not soft”, he continued, “and he has power of his own and he also has a strong amateur background himself so I know he has some boxing acumen as well. He will be aggressive but will not be so with reckless abandon. He will be smart about it and it will be an intense but tactical match.”

Upon the fight’s conclusion, in Scully’s opinion, Thurman gets the nod.

“I think at this point in the game I’m going with Keith Thurman to win a decision,” he said. “I think Robert will find the power to be more than anyone he’s faced yet and he will have to be a little more hesitant than normal and that will take away from his aggression just enough to where Keith will be able to set up shots to his liking. At the end of it all I think Keith will take over the fight after around the 7th or 8th round and will come away with a pretty clear decision victory.”

Thurman and Guerrero will be battling on network prime time when Al Haymon debuts his Premier Boxing Champions on NBC. Both fighters already have premium cable exposure, which has captured the diligent boxing fans attention and grown them that fan base. Will network television bring fighters and boxing to new superstar levels? Scully is cautiously optimistic.

“I’ve always said that if they do it right and have a good mix of promoters being allowed to put their guys on in the main events on these shows and if there isn’t any extreme favoritism towards a small and select group of promoters then this thing could really pick up steam. It could catapult certain guys into stardom and mass public consciousness the same way it did back in the 1980’s for so many guys.” Scully said.

He also reminded of previous network success a couple of decades ago.

“There were a lot of guys who owe their careers and their success to network TV and became household names because of it,” Scully recalled. “If you remember, it wasn’t HBO or Closed Circuit that made guys like Sugar Ray Leonard, “Boom Boom” Mancini and Larry Holmes household names–it was free weekend network television. By the time they were ready for major fights the whole boxing world was extremely aware of them as opposed to now where a lot of times the first time you really see certain guys in a high profile fight it is on Pay-Per-View.”

“A series like this,” Scully continued, “could see us watch a guy several times and build his followers as they follow him right from free network TV fights into the HBO and Showtime and PPV mix. The difference is they will be very visible guys, if not big stars, before they ever even reach that level.”