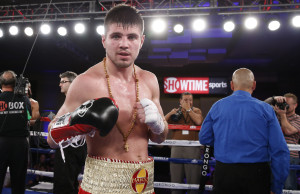 Some nights of boxing absolutely confound analysis and render any attempt at gleaning lessons completely moot. We got one of those kinds of nights tonight from the MGM Grand in Las Vegas on ESPN2 Friday Night Fights. In the main event, Tony Harrison (20-0, 17 KOs) stopped a completely shot, overmatched, “what was he doing fighting?” Antwone Smith (23-6-1, 12 KOs) in two rounds. In the co-feature, Ievgen Khytrov (9-0, 9 KOs), contrary to predictions, put on an actual boxing clinic, showing patience and impressive ability to do more than just slug as he got rid of Jorge Melendez (28-5-1, 26 KOs) in eight rounds. There were swing fights—two downright frightening mismatches where someone could have gotten seriously hurt and one freak of nature stick figure going the full four and giving us all a judging lesson in the process—more on those later.

Let’s start with the main event. This was what you’d expect. A prospect with power faced a faded fighter they dragged in off the street and knocked him out. You want analysis? OK. Tony Harrison holds his lead left hand so low that unless they do some serious work correcting that in the gym, the first time Harrison fights a southpaw with any hand speed at all, Harrison will get jabbed and lead hooked into oblivion and at best decisioned and at worst knocked out in brain-scrambler fashion.

While we’re on the subject, can the Adrien Broner act, Tony. You should’ve learned from watching the guy who came before you about what to do when you’re given a national TV audience and a chance to do work against a guy who poses no threat to you but who you could cat and mouse for awhile to learn something you can’t learn in sparring. Yes, you won impressively in the sense that you blew a guy out of the ring, but don’t point at yourself like a toddler who just made potty. You’ve got work to do, and if you don’t do it the right way, some future opponent is going to do it for you—just ask Adrien Broner.

The co-feature gave us more to work with. Ievgen Khytrov did more to impress by going rounds than he would have if he’d just blown Melendez out. Khytrov figured out very early on that the guy in front of him wasn’t just going to fall down from an in-the-front-door A-Team assault, so he switched styles and put those 500 amateur fights to work for him. Khytrov worked the head. He worked the body. He controlled range, played defense, wore his opponent down, never looked in any danger himself, learned that he can handle being taken into deep water by a guy who has a bright future ahead of him making three thousand bucks a fight taking prospects rounds…and then finally closed the show with a Micky Ward-quality body shot that left Melendez looking for his lunch and the corner looking for the towel.

Give this much to Jorge Melendez—dude’s tough as nails. He’ll never be a world champion, but guys who can give rounds? Those are the guys who become kings of Palookaville, guys like Doel Carrasquillo and Clarence Taylor (who are those guys? The two guys who knocked Melendez out before tonight’s fight, and who were a combined 25-37-5 as gatekeepers testing guys like the then-still-on-the-rise Jorge Melendez.) As long as there’s a promoter who needs to find out what his young kid in the gym is made of, there will be work for Jorge Melendez. That’s being a professional, and all praise is due to him for doing the lunchpail man’s work.

Now then, on to fights for which no praise is to be given. In the very first fight of the night, referee Jay Nady was Mercante-level inept in keeping an overmatched opponent safe. Daniel Henry (2-3-3, 0 KOs) actually turned his back on his opponent in the corner after having been rocked throughout the first round, but did Nady stop the fight? Nope…he let Caleb Plant (6-0, 5 KOs) tee off on a defenseless man to the tune of three clean shots that scrambled poor Daniel Henry’s brains as surely as if they’d been put in a blender. There’s no sport in that unless you’re the kind of person who thinks that Wladimir Klitschko with a chainsaw would be a sporting opponent for a featherweight club fighter in handcuffs. We’re assuming Wlad isn’t wearing boxing gloves and trying to operate the chainsaw, because that would be more dangerous to him than his opponent and ahem where was I, right, mismatches.

The second “swing” fight, which came before the co-feature even started, was another slaughter, although to be fair, at least the guy getting slaughtered came into the fight unbeaten. Erickson Lubin (10-0, 7 KOs), last seen on Friday Night Fights only four weeks ago, actually expressed to Teddy Atlas how he had learned of one of his weaknesses and put effort into the gym into improving it. That’s some quality, professional work right there.

What’s more, Lubin, whose weakness involved dropping his right hand when throwing the left, not only kept his right hand up, but used it perfectly in close on the counter to crash a hook from the southpaw stance into the face of Kenneth Council (8-1, 6 KOs) and deposit him on the canvas. Industrial-strength whupping ensued, and the fight was over in a single round.

Finally, at the end of this night of more squashes than the menu at the first Thanksgiving, we saw a man who appeared to be made out of coat hangers, as 6’2” and 149-pound Jamontay Clark (5-0, 3 KOs), who still has not fought an opponent with a winning record, continued that “trend” against Rick Graham (2-5-2, 1 KO), who still has not beaten an opponent with more than zero professional wins. Over the course of four rounds, Clark showed that he has no clue whatsoever how to use his height and fight tall, while Graham got a lucky phantom punch in just as he was stepping on the foot on Clark in order to score a “c’mon, Jay Nady, it is just not your night, get some black coffee and sober up” 10-9 round on a “knockdown” that was anything but.

Teddy Atlas pointed out that the judges don’t have the benefit of replay—if the ref says it’s a knockdown, then that’s word of God in there—and scored the round 10-9 for Graham, as did your columnist, as did the judges at ringside, as did (by a closer-than-you’d-expect 69-31 percentage margin) the social media audience. When it was all said and done, everyone and we do mean everyone gave it 39-37, for your winner by unanimous decision and still undefeated, Jamontay Clark.

In somewhat sadder news, this week presaged the swan song of FNF—sources tell your columnist that FNF is toast and that everything you may have picked up from the aggressive push of tomorrow night’s Keith Thurman-Robert Guerrero and Adrien Broner-John Molina fights (including downright gratuitous mention of the Premier Boxing Champions brand by Bernardo Osuna and Dan Rafael on the broadcast) was on point. ESPN hasn’t officially announced anything, but it’s pretty obvious that they’re going in for the pay-for-air infomercial business model (stay tuned to next week’s Southpaw column for your columnist’s take on all this from a B-school education point of view)…which means the end of the FNF run after the Boxcino tournament final. This is either a rescue from low-rent-district fight cards or the beginning of the end of the sport—once again, more on this next week.

FNF is off for the next three weeks, returning on March 26 (a Thursday? That’s what they’re saying…) from Hialeah, Florida, as rising prospect Frederick Lawson (23-0, 20 KOs) takes on the decaying corpse of Breidis Prescott (27-6, 20 KOs) in a fight oddly reminiscent of the main event we just saw tonight. The Boxing Tribune will have a full preview and recap of the action come fight week—in the meantime, looks like your columnist gets a vacation.

Stay tuned—we’re the worldwide leader in covering the Worldwide Leader.

Fox Doucette covers Friday Night Fights for The Boxing Tribune and writes the weekly What If alternate-history series for this publication. His opinion column, The Southpaw, appears on Thursdays. Fan mail, hate mail, and that hit man Al Haymon hired can be sent to beatcap@gmail.com.