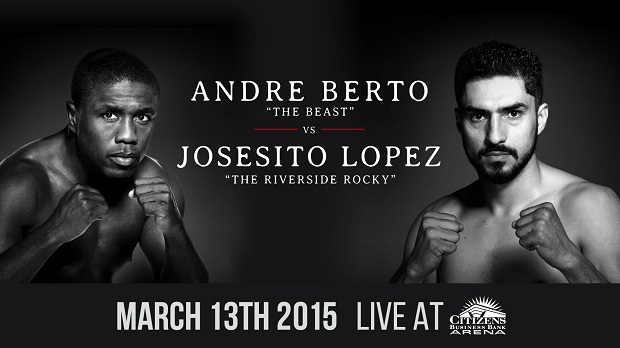 To say that a bout is “do or die” has become a cliché in the boxing writing business, but the debut main event of Premier Boxing Champions on Spike TV at the Citizens Business Bank Arena in Ontario, California certainly fits the bill of a “must win” for both fighters.

Andre Berto (29-3, 22 KOs) and Josesito Lopez (33-6, 19 KOs) have both fallen on hard times and, more importantly, are quickly losing ground in the stacked and packed welterweight division. The loser of Friday’s contest on Spike TV will likely be at the point of his career where there’s simply no making back the ground lost.

Andre Berto, the former WBC welterweight champ, has fallen the furthest of the two scrappy 147-pounders. At one time, the Haitian-American was regarded as the third best welterweight in the sport, ranked only behind Floyd Mayweather and Manny Pacquiao.

Blessed with hand and foot speed, solid power, and the ever-influential guiding hand of advisor Al Haymon, Berto came from the amateurs as a highly-regarded prospect with a reputation for producing exciting battles and quickly rose to world title contention. HBO was investing a lot of air time in the talented 20-something and, along the way, drew significant criticism for, perhaps, paving the road to stardom too well for their fighter.

Still, Berto performed well and seemed to be living up to his promise against the opposition stacked against him—until the wheels completely fell off the bandwagon cart.

A loss to Victor Ortiz in a Fight of the Year battle in 2011, followed by a failed drug test prior to the scheduled rematch, marked the beginning of a quick downward spiral for the Florida native.

Subsequent ring performances from Berto saw him flat-footed and stiff—an almost completely different fighter from the Berto of just a couple of years prior, who won his bouts on explosive speed and fine-tuned athleticism.

A shoulder injury was blamed for the poor performances, but others talked of Berto being a shot fighter or of the possible relation between his sudden decline in ability and the failed drug test.

Berto looked flat in an RTD win over the overmatched Jan Zaveck to win the IBF title, but then lost back thrillers against Robert Guerrero and Jesus Soto Karass (via UD12 and TKO 12, respectively). A September, 2014 ten round decision over Steve Upsher Chambers did little to rebuild his career momentum.

Unlike Berto, Riverside Rocky, Josesito Lopez, was never even supposed to have gotten as far as he has.

The overachieving Mexican-American brawler was always regarded as a tough battler, but was never really seen as a player in the division until he busted Victor Ortiz’s jaw en route to a TKO 9 victory in 2012.

The Ortiz win then led to a poorly-advised decision to replace Ortiz in a scheduled showdown with rising Mexican superstar Saul “Canelo” Alvarez.

Undersized and overmatched, Lopez fought bravely, but was clearly well over his head and was stopped in the fifth round of a bloody, multiple-knockdown massacre that very well could’ve ended his career.

But Lopez’s guts (and vulnerability) then earned him a bout with Marcos Maidana and another tough TKO loss. Again, Lopez accounted for himself well against the heavy-handed Argentine, but lacked the ability and one-punch power to come out ahead.

After a rest, Lopez returned to the ring against noticeably softer opposition and three straight victories, but is now being positioned to once again make a run at the top ten and, maybe down the road, a title shot.

Of course, that all depends on how much he has left in his tank after being driven to hell and back in several consecutive wars. It also depends on what is left of Andre Berto as well.

Obviously, Berto is the better boxer of the two with the better amateur pedigree. He’s also more gifted athletically and has more punching power. On paper, this is a bit of a mismatch. In reality, though, Berto has rapidly lost much of what has made him successful, while Lopez will likely still have the grit, resolve, and tenacious aggression that has defined his career.

Based on recent performances, it’s hard to imagine Berto being able to stay with Lopez in a toe to toe war of attrition and only slightly less difficult to imagine Berto boxing his way to a defense-minded decision.

Berto will try to dig into his bag of tricks, but it won’t likely be long before Lopez starts to connect and do some damage. From that part forward, it’s all about who wants it more.

If Lopez can get to Berto early and start grinding him down with persistent aggression, he has a good chance of scoring the victory—perhaps even by late stoppage. The longer he takes to start getting to Berto, however, the less likely he’ll be to win.

In this particular case, look for Lopez to work his way inside Berto’s guard by the seventh round or so and expect Fight of the Year action from that point forward. But Berto, by then, will have some rounds in the bank and enough points in his favor to take the decision after surviving the second-half war.

Then, maybe, Keith Thurman-Andre Berto in the late summer/early fall?

Porter has fluctuated from displaying flashes of real superstar potential (like in his two-round steamrolling of Paulie Malignaggi to win the IBF belt) and utter stylistic confusion (like in the bout that cost him that same IBF title, against Kell Brook).

Still full of potential, Porter needs major help with some of the sport’s basic fundamentals, such as footwork and the development of an inside game. He’s good enough to beat most other fighters with pure athleticism, but elite-level success will always escape him unless he can refine his skills.
Porter’s opponent on Friday, Garcia, is a decent fighter with all-around decent ability, but he is clearly the “B-side” in this bout.

Garcia’s record has been padded with wins over the likes of Breidis Prescott and Victor Manuel Cayo—decent wins, but hardly the stuff on which legends are built. Truthfully, it appears as though Garcia has been bred to be the perfect opponent with the “right” record for a strategic loss against some hotshot prospect. Porter appears to be that hotshot. But don’t sleep on Garcia—he is tenacious and tough. That may not be enough to get him the win, but Porter WILL have to fight for his victory.

*EDITOR’S NOTE: Erick Bone (16-1, 8 KOs) will replace Roberto Garcia against Porter on Friday’s telecast. Garcia was scratched from the card due to an inability to make weight. Read more HERE.