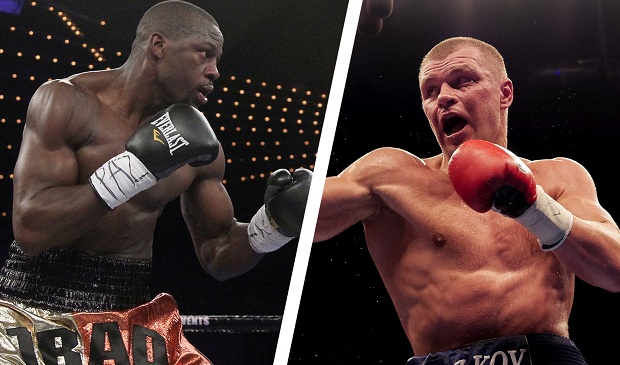 Saturday Steve “USS” Cunningham will have a couple of interesting “firsts” in his USBA heavyweight title bout against Ukrainiann Vyacheslav Glazkov.

March 14 will mark Cunningham’s first fight in Canada, and, first HBO appearance. Notable yes, but all taken in stride by Cunningham (28-6, 12 KO) who is intent on a victory that could lead ultimately, to a date with the Klitschko/Jennings winner. But first things first- taking care of Glazkov (19-0-1, 12 KO).

Glazkov boasts an undefeated record, and the distinction of Olympic experience, having won the Bronze medal at the 2008 Olympic games in Beijing, China. In his favor, Glazkov is a natural heavyweight with good defense, accuracy and movement. He proved himself against big heavyweight Derric Rossy, boxing his way out of danger and enduring the power of Rossy’s heavy-handed offense. Glazkov, who is eight years younger than Cunningham, is also gifted with accuracy, aggression and a good chin.

The physically strong former Olympian wears opponents down during the course of a bout, but lacks true one-punch, fight stopping power, which could create a long, painful evening for his foe.

Cunningham is well-equipped to deal with Glazkov. Although not a natural heavyweight, he has battled three undefeated heavies in his last four bouts, and has been in twelve round bouts nine times while Glazkov has one twelve rounder to his credit.

Being a smaller heavyweight will give Cunningham ability to box, move, and use a good, constant jab against Glazkov. Defense-wise Cunningham is smart, and employs movement to avoid offensive traps and not get hammered. One of the biggest assets for Cunningham is being tough. Amir Mansour dropped him twice and was stunned and on the canvas before Cunningham ended the bout with a unanimous decision victory. 275-pound Natu Visinia posed a huge challenge and succeeded in knocking Cunningham down but was battered enough to lose via stoppage in the seventh round.

Cunningham and Glazkov both possess great technical skills, use movement well, and neither are afraid to mix it up. The edge for Cunningham will be experience with better opposition, and the benefit of twelve distance bouts. Armed with that experience, and some valuable tools: his jab, hand speed and movement, Cunningham should be able to diminish Glazkov’s offense, and earn the win.