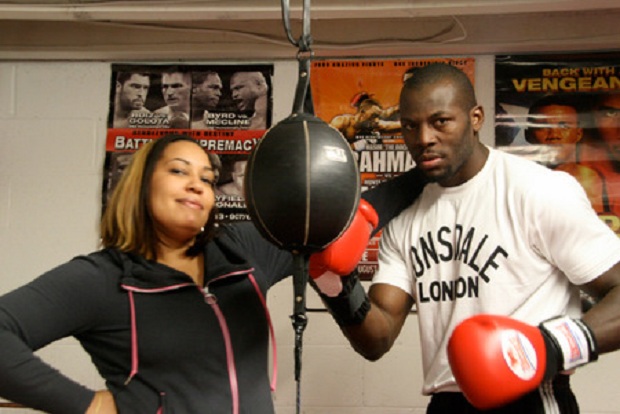 “I was so proud of Steve,” she said. “He fought his heart out, listened to his trainer, and got the job done. There was so much on the line and our first time being on HBO.”

As the fight played out in front of her, Livvy was also hearing updates during the fight, and was feeling good. “Then,” she recalled, “Michael Buffer starts to announce the results. He said unanimous decision. I was still feeling good, then he read the scores….and then, he said the wrong name. And it was devastating.”

As bad as the end results were for the fight, sadly, it’s not the first time Livvy and Team Cunningham have been dealt this hand. “Unfortunately, it’s something we’re used to,” she said. “We’re used to that feeling. Several time the judges have gotten it wrong, but this time, I was like wow. I can’t believe it. It’s hard to have faith and we give it our all, and three people take it from you,” she said.

Being the “visiting fighter” was difficult enough but Team Cunningham also had another unique disadvantage.

“Both fighters were promoted by Main Events,” Livvy said, “and that’s definitely one of the things I regret about the fight.”

All of the fighters in the Cunningham dressing room were losers in Montreal, which Livvy also found disappointing. “We were the “B” fighters that night. We weren’t in the pole position. I don’t know why the judges saw what they did, or what they were thinking, but it was blatant, and it’s unfortunate that it even matters.”

Livvy admitted still feeling emotional over the loss on Monday, but by Tuesday, this wife, mother, leader and manager was back in action. “I’m back to work, making calls, reaching out, and seeing what can be done about this, but- it’s still messed up.”

Now the intent is to straighten the mess out, and keep Steve Cunningham in the forefront as a heavyweight contender. “It is hard,” Livvy said, “we’re talking a lot to our lawyer and the rest of the team. We want a rematch, for sure. We feel like we deserve it, and the judges should check this decision again since we feel they got it wrong the first time.”

Reflecting on the decision, she continued. “Controversial isn’t even the right word,” she said. “It was blatant. I don’t see a great divide in the write ups. People are saying Steve was robbed, so in this case there is some recourse. I’ve got a call in to the promoter, and the IBF, and I’m trying to get a rematch. I’m also working and lobbying and making sure he doesn’t drop in the rankings.”

A rematch seems only fair, but can that feasibly happen? “Who knows?” Livvy said. “There are so many factors to consider. Would there be a network to pick it up? Would the IBF order it? There are so many working pieces to it but we’re going to see.”

Cunningham fans and boxing supporters swiftly utilized social media to spread the word about petitioning the IBF over the decision. And Livvy is encouraging people to come forward.

“Absolutely!” she exclaimed. “We didn’t have the chance to spearhead it ourselves. The fans, boxers, and people in boxing that work hard, are fed up, and they have just done this on their own. We didn’t have the chance. We appreciate the support, and if we’re going to save the sport we love, we have to do something. Matches with outcomes like this are really unfair.”

Having the support of the fans and shared sentiment of other fighters is important, but promoters do play a significant role in creating fights. And rematches. Main Events who promote Steve Cunningham haven’t yet addressed the issue.

“I spoke with Kathy Duva that night,” Livvy said, “but we have not had an official conversation yet. I don’t know what they feel like. It’s unfortunate when you promote both fighters, but they should do their best to be neutral.”

Robbed. Ripped off. Screwed. Call if what you want to, but Livvy Cunningham knows that’s what happened to her husband against Vyacheslev Glazkov. But it really goes much further than that.

“Steve was busier and beating him at his own game,” she said. “My heart breaks for him. He worked so hard. I’m mad as his manager, and as his wife you want to cry on the spot. But I want to challenge the sanctioning bodies, to fix this. We’ve got boys training now, and I’m willing to fight for this beyond when Steve is done. For when our boys fight.”