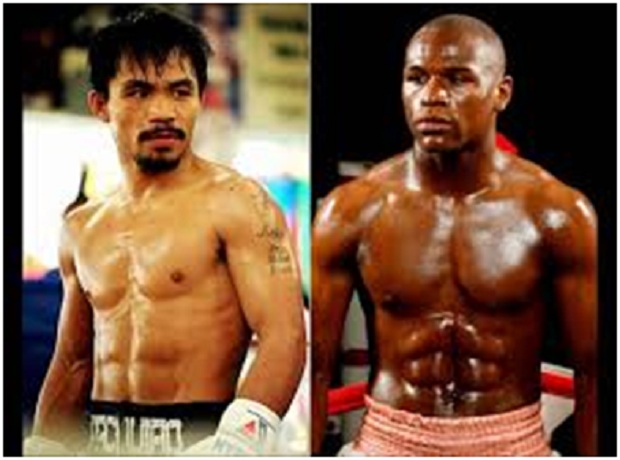 “What makes Manny so much more of a threat compared to someone like Maidana is that he has a whole variety of talents.”—Joe Goosen

“Great damn KO punch Manny landed on Hatton, but then again: Floyd is the only fighter in history to get 3 hits with one shot: one he hits Hatton, 2 Hatton hits the turnbuckle, then 3 falls & hits his head on the canvas.”-Anonymous poster

“…Pacquiao…will have to be in the best condition of his life. Equally important, he will need to have the mental muscle to avoid becoming frustrated and chasing Mayweather around, trying to spear the elusive one with one straight left. It is not going to work with Money.”—Gordon Marino

“His [Mayweather’s] technique is unbelievable…no one is better at making adjustments in the ring. He just figures everyone out.”—Paulie Malignaggi

“Manny has speed and power. He throws a lot of punches. You need to put constant pressure on Floyd. Be in front of him all the time, but moving side to side and punching from angles. Manny is going to feint Floyd out of position a lot and make him throw more punches than he is used to, that will open Floyd up.”–Mike Tyson

“Floyd has the edge,,, He’s naturally the bigger guy. He has not learned how to lose. That confidence is so important,,,Of course, (Pacquiao) has been knocked out cold. That memory is still there somewhere. It will be Floyd’s job to bring those ghosts back to the forefront… The edge: Mr. Mayweather, the money man, the better defensive fighter, the guy that will take advantage of reckless aggression of Pacquiao.”—Teddy Atlas

As pointed out in Part One, Manny gets the edge in common opponents but then things begin to equalize and move in Floyd’s favor.

Floyd is a better defensive fighter, a better counter puncher, a better lead puncher, and he possesses a better toolbox of all-around weapons than Pac-Man. Moreover, he has seldom been rattled or wobbled. Numbers don’t lie and 47-0 represents numbers— and 47 good reasons why he likely will win this fight.

Manny’s numbers at 57-5-2 and attendant accomplishments are superb as well, and his offensive tools as developed and refined by his offensive-minded trainer (pun intended) are remarkable to be sure. In fact, he was seldom better than when he was busting up Juan Manuel Marquez’s face just before Marquez sent Manny to Pinoy Slumberland.

However, if you believe some of the bile-inducing repetitive hype from the “boxing media,” this could be a thriller diller with Manny taking it to Money and possibly stopping him. Huh, what’s he going to take to Floyd, knockout power that he hasn’t shown in years? He couldn’t even finish the Long Island Rabbit in Macau after 6–count ‘em—six deckings. Fact is, Manny hasn’t had a KO since 2009 (Floyd’s drought goes back to 2007 excluding the Ortiz infamy) so how is he going to finish arguably the best defensive fighter in decades who has never been down from a punch.

I agree with Oscar De La Hoya to wit: It could be a very boring fight. Manny may test Floyd early but as soon as he learns what Canelo Alvarez did (that Mayweather has pop in his counterpunches), he will become more tentative and more frustrated. Mayweather will then carefully adjust to circumstances and move into a groove that’s designed to win rounds by boxing carefully and not engaging in fire fights.

I like what Terrance Crawford say to wit: “Pacquiao is going to come in jumping with a lot of flurry-like punches, and Floyd is just going to time him and catch him coming in.”

Common opponent Juan Manuel Marquez agrees, “Normally when Pacquiao is aggressive, he throws [recklessly], and in this respect he must change because Mayweather is a great counter-puncher and knows precisely what hurts Pacquiao.”

In the end, neither man will stop the other. And though the crowd will raise the decibel count each time one misses, this will turn into a tactical and technical fight perhaps like Floyd’s win over JMM or Canelo—and it could be very boring, but I wouldn’t miss it for the world.

Mayweather will in by a UD or MD.

And finally this metaphor from Teddy Atlas

“So for the overall sport, you get a fight like this that drives fans to talk, they’re gonna talk at the water fountain, in the car, in the car pools, they’re gonna talk when they’re not supposed to be talking. It’s very important for the fans. The fans, you know what they’ve been like? They’ve been like a guy walking in the Sahara Desert, and their tongue — is just hanging out, and they’re scorched. And they’ve been looking for something to get excited about, and now they think, they look above and they see an oasis, finally. After walking in that desert and they think that oasis is Pacquiao and Mayweather. I just hope it’s not a mirage. I want them to get water, not sand in their mouths.” (BLH February 20, 2015).