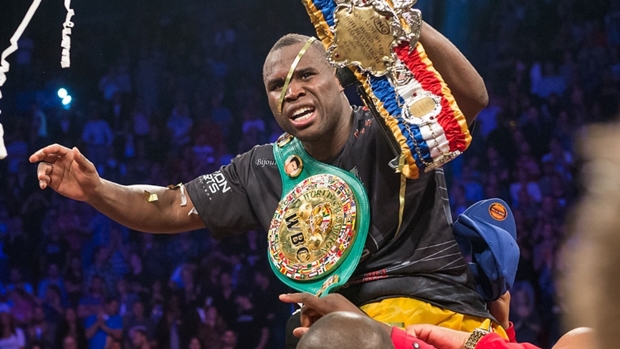 Pepsi Coliseum, Quebec City, Quebec, Canada– Coming into Saturday’s CBS afternoon PBC main event, there was little doubt as to the outcome– Defending WBC light heavyweight champ, Adonis Stevenson was going to win. The question was whether we’d see a fight, a one-sided romp, or an ugly, frustrating stylistic match. As it turned out, we saw a bit of all three.

Stevenson (26-1, 21 KOs) made the fifth defense of his WBC title via twelve round unanimous decision over former super middleweight titlist Sakio Bika (32-7-3, 21 KOs) in a bout that mostly showcased the defending champ’s athletic prowess and the challenger’s stubbornly clumsy ring style.

Boxing from the outside and launching left hands at will, Stevenson dominated the first eleven rounds of Saturday’s bout as Bika moved forward and ate shots without much of a real game plan to turn the tide.

An occasional wild shot here and there did land for Bika, but not enough to do any damage to a Stevenson who was having an easy afternoon with just a left hand and minimal movement. Knockdowns of Bika in round six and nine just added to one-sided nature of the bout.

By the very end of the eleventh round Stevenson had slowed down or, perhaps more accurately, had lost interest enough for Bika to mount a comeback of sorts. Bika would take the twelfth round on The Boxing Tribune’s unofficial scorecard (the only round given to him), but was never close to stopping the way-ahead Stevenson.