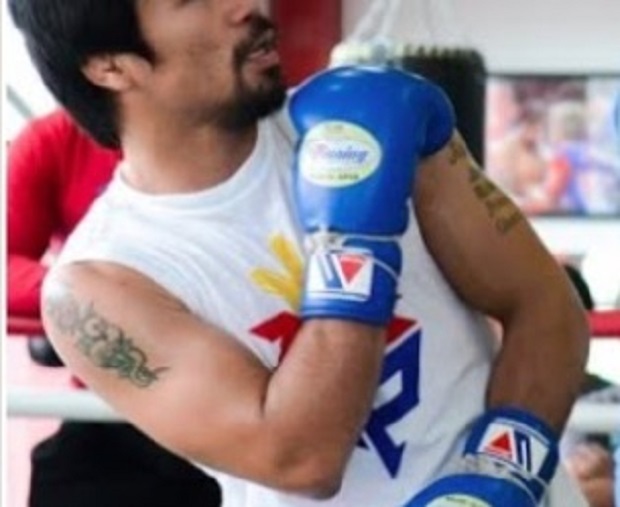 Hola familia y amigos, welcome to a sancocho, grilled iguana and green plantain flavored edition of Central America’s most cliche-laden, semi-satirical number one source for Hawaiian skin on skin street justice, The Sunday Brunch – We are the reason you get up on Easter Sunday and gorge yourself on Cadbury Cream Eggs, throw up, then beg for forgiveness. This week we’re bringing you the top six reasons you should place your hard earned Pesos on Manny Pacquiao come May 2nd. Don’t fret TMT fanboys, you’ll have your very own list of reasons to bet on Floyd Mayweather next week! Hold on to your fuzzy bunny slippers and jump on the nearest bandwagon, we’re about to drop it like it’s lukewarm. With that being said, I gave you your instructions in the dressing room; what I say you must obey – Cuidate, escucha mi, toca los manos y buera suerte…Let’s get it on!

6. War. Manny Pacquiao has been in far more firefights than has Floyd Mayweather, his in-ring knowledge will be an advantage come fight night. While Mayweather has been in plenty of prizefights, his experience with trench warfare is limited. If Pacquiao can drag him into his style of combat then he will have the upper hand. The key is to get inside on Mayweather…”Floyd Mayweather operates best at his optimal punching range and will often push off with gloves, elbows or forearms to get that distance when smothered…an off-balance fighter is an ineffective fighter.”

5. Footwork will be unbelievably important against Floyd Mayweather. From darting in and out of range to superb lateral movement to evading while landing from surprising angles, Manny Pacquiao’s legs may be some of the best to ever grace a ring. Don’t believe the cramp story line, everything will be functioning at 100% come May 2nd, fighters at this level are finely tuned like super cars.

4. Power punching will play major part in this match up. In order to keep Mayweather honest, Manny Pacquiao will have to hurt him early. Once Floyd Mayweather feels the Filipino’s extraordinary punching power, he will take time to plan his shots rather than just going into Pacquiao’s strike zone. Someone wise once wrote this: “Fighters on this level have everything down to instinct, to muscle memory. When they are made to make pause, to take that additional fraction of a moment to contemplate their next move, that’s where disaster often lies. The boxer who can cause that momentary hesitation will have a massive advantage…”

3. Manny Pacquiao’s speed is rivaled by very few in the fight game today. He tends to throw in four and five punch combinations, often landing several head shots followed by at least one to the liver or ribs to confuse his opponent and break their defense – Very few boxers can deal with such a voluminous output. Mayweather is the master of defense, but Pacquiao’s offense has been likened to a machine gun.

2. This might be counter intuitive, but because Manny Pacquiao has lost as a professional, he may be more prone to take risks than Mayweather. The smart money will wager that the Filipino has the ability to halt the undefeated fighter, that or out-hustle him by way of being first, throwing flurries and looking all around busier. Regardless of fight statistics, this often times wins judges over.

1. The straight left will be integral to victory. Mayweather evades going straight back until he hits the ropes in order to use his lateral movement, Manny Pacquiao’s left hand hits with almost laser-like precision. If Pacquiao’s trainer, Freddie Roach’s prediction is correct, that both fighters will start fast, Manny’s southpaw stance could be too elusive, explosive and unconventional even for Floyd Mayweather.

Thanks for joining us again this week. We’ll be back next time with more dangling participles, run-on sentences and miscellaneous jibber jabber. We will have the top six reasons you need to place your Euros on Floyd Mayweather Jr and we’ll be looking ahead to AMC’s new zombie show entitled Fear The Walking Dead. Send all love letters, religious spam and penis enlargement scams to JESSEBOXINGTRIBUNE@GMAIL.COM, pretend friend us on Facebook at Jesse Ian Lardies. Check out our food/cat/boxing pics on Twitter @JESSEBOXING. Until next time, sante!