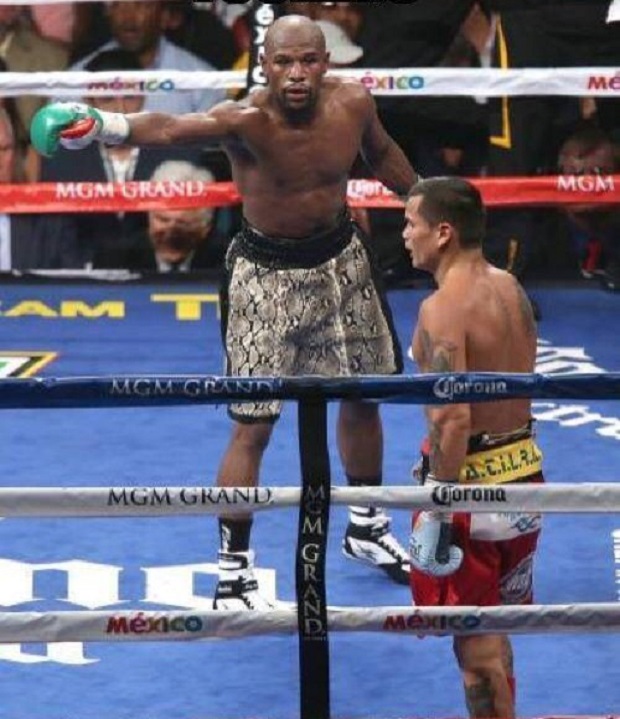 Hola amigos y familia, welcome to the most rootin’ tootin’, gunslinging edition of Boxing’s Sunday Brunch that you will ever read today – We are the boxing equivalent of Newton’s second law of motion, which states that acceleration is directly proportional to net force when mass is constant AND that acceleration is inversely proportional to mass when net force is constant. In the interest of fairness and back by unbelievable demand, we are bringing you the top Six Reasons Why You Must Bet On Floyd Mayweather. If you haven’t read last week’s Six Reasons Why You Must Bet On Manny Pacquiao, I highly suggest you do so now, if you like to make money. Or Manny Pacquiao. So, hold on to your autographed Jinkee Pacquiao photos and always bet on black, we’re about to sort through this nonsense. So without further ado, I gave you your instructions in the dressing room; what I say you must obey – Cuidate, escucha mi, toca los manos y buera suerte…Let’s get it on!

6. As of right now, the betting lines for the Floyd Mayweather-Manny Pacquiao mega-money matchup are tightening up, supposedly because of some big Pesos being placed on the Filipino. Look for the lines to close in further as fight night approaches. Mayweather is being listed as a slight favorite with -200, while Pacquiao is sitting at +160. For you to make any kind of money, the best strategy would be to hedge your bet with a draw – which currently is marked as +1800. With one fight left in his record breaking contract, who could Floyd Mayweather face to make more cash than with Pacquiao?

5. As fighters age, no matter their unbelievable physicality, their speed decreases by a few notches. Both of these athletes possess speed and footwork that is levels above their peers, however, being that their ages are very close (Pacquiao is 36 and Mayweather just turned 38), I think that the speed advantage could prove to be a moot point. Timing would trump fast flurries, but how the judges see the action is a completely different subject.

4. With 24 world championship fights and with just two of those being non-title affairs in the past ten years alone, Floyd Mayweather has seen everything inside the squared circle and faced every style. While Manny Pacquiao is an extremely unconventional fighter, Mayweather’s experience in facing many different fighters could be a decided advantage. While Manny Pacquiao has more professional bouts under his belt, four fights of his impressive record (57-5-2, 38 KOs) were rematches, rubbermatches and even one quadrilogy.

3. Timing is everything. Floyd Mayweather generally takes a few rounds to dial in his accuracy and timing, but once he solves his opponent’s game, he usually dominates the rest of the fight. According to the monkeys clicking buttons over at Compubox, Mayweather leads all boxers in the sport for his overall connect percentage at 44%, while his opponents landed the least amount of punches on the former Olympian at just 19%.

2. Generally speaking, Manny Pacquiao does most of his fighting swarming his opponents, he is in constant pursuit. If Floyd Mayweather can (as he usually does) control the pace of the fight and make Pacquiao fight on his backfoot, then he will take away one of the Filipino fireball’s most important attributes.

1. Floyd Mayweather’s power is not only underrated/overlooked, but his chin is solid as well. Right at the bell in their rematch, Marcos Maidana landed an amazing right hand to the face of Mayweather and the American’s eyes were still sharp despite him being obviously rocked. When “Sugar” Shane Mosley landed what was likely the hardest punch Floyd Mayweather has ever absorbed, Mayweather’s knees gave way as the right hook clipped his temple, but he still had the presence of mind to hold on to Mosley’s arm as to avoid a knockdown and to gain those precious moments to recover from the blow. I believe Floyd Mayweather fights slightly conservative relative to what he is capable of. In situations where a more aggressive fighter would go in for the kill following the trail of blood, Mayweather often excercises patience and prefers to box. This fight, however, I see Floyd Mayweather using his full arsonal against Manny Pacquiao. The hardest punch, they say, is the one you never saw coming.

Thanks for joining us again this week. We’ll be back next time with more dangling participles, run-on sentences and randomly assembled catch phrases. We will be explaining to creationists what “the speed of light” means and how this simple knowledge will crush their entire existence. Please send all nude photos of Rachael Cordingly to JESSEBOXINGTRIBUNE@GMAIL.COM, follow us on Twitter @JESSEBOXING and pretend friend us on facebook at Jesse Ian Lardies. Until next time, sante!