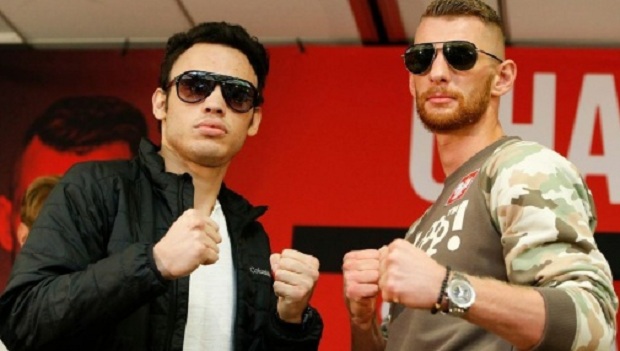 Their bout will take place at the StubHub Center in Carson, California, with the winner claiming the vacant WBC International light heavyweight title. Some extra motivation for Chavez may lay in the hefty $100,000 per pound fine that will be imposed on either fighter who exceeds the 172 weight limit.

Lots of things have been happening for Chavez Jr. since his last ring appearance one year ago. This marks his first fight in the Al Haymon stable, his Showtime debut, and first time ever training with Joe Goossen. Goossen held training camp in Lake Tahoe, and by all reports, and Chavez’s own admission, training with Goossen was great, he’s strong and comfortable at the 172 weight and ready for the Fonfara (26-3, 15 KO) challenge.

Fonfara lacks the marquee name of his challenger, but his reputation precedes him as a tough brawler, with a resume to back it up. He owns a win over the insanely tough Glen Johnson and made a very competitive distance match with Adonis Stevenson, sending him to the canvas in the first round.

Those two bouts indicate Chavez could be in for a rough evening and truly tested at the hands of a serious, legitimate light heavyweight. Fonfara can box, and he can bang it out, and Chavez is also equally capable of both skills, but must keep defense in mind. Rushing in on Fonfara could be a fight ending move.

Chavez has the greater number of fights, but the bulk of his competition has been at middle and super middleweight. He was able to be the aggressor against the likes of Brian Vera, Andy Lee, Sergio Martinez, and Marco Antonio Rubio, but it’s safe to say they don’t deliver the same punch as Fonfara. The best bet is for Chavez to come with the versatility Goossen believes he possesses, and not tempt fate. Fonfara is a tough and determined fighter, who had Adonis Stevenson in some trouble when he seemed to tire in the ninth round of their bout. He also has a hard right hand in his arsenal, which combined with his athletic style could be a rude awakening for Chavez in his light heavyweight debut.

Both fighters are prepared to wage war. Fonfara declares he will defeat Chavez convincingly. Chavez also promises a victory over Fonfara. Chavez must impress after a year absence and personal battles outside the ring, and career struggles with training and his weight. Defeating Chavez gives Fonfara a step up in the light heavy stakes and the notoriety of beating the son of the legend.