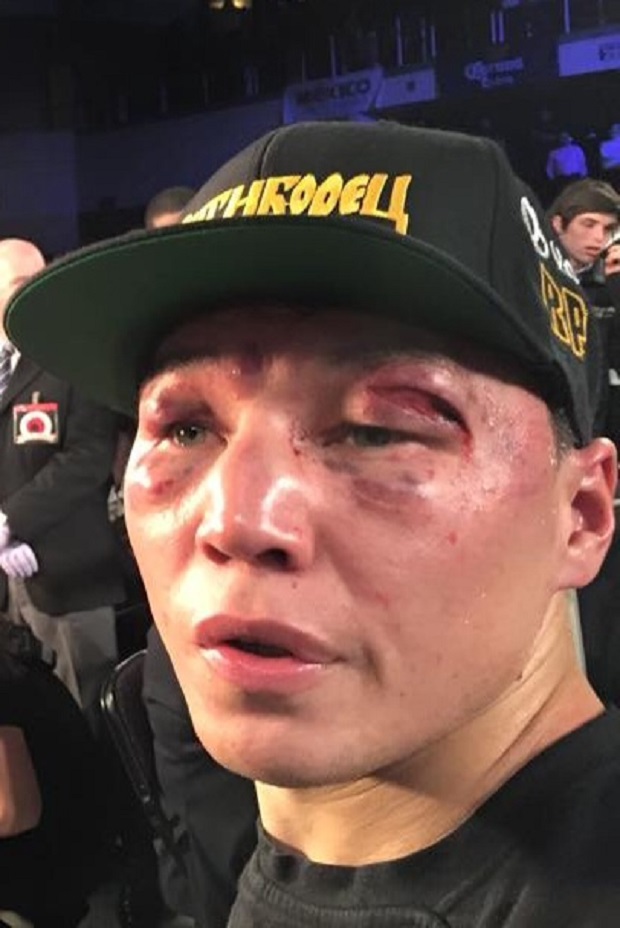 Hola amigos y familia, welcome to a nationally charged edition of both Argentina’s and Russia’s number one, semi-satirical source for Hawaiian skin on skin street justice, The Sunday Brunch – We are the boxing column equivalent of Neil Degrasse Tyson’s many different astronomy neckties. This week we’re diving face first into the lacerated and mutilated eye of Ruslan Provodnikov, we are also going to try to not eat too many uppercuts while discussing Lucas Matthysse and his future. So, grab onto your Endswell, dip your cotton swab into adrenaline and call a fucking doctor, we’re about to sort through this nonsense. I gave you your instructions in the dressing room, what I say you must obey – Cuidate, escucha mi, toca los manos y buena suerte…Let’s get it on!

“He was the hardest puncher that I ever faced” – Ruslan Provodnikov

On paper this was a fight of the year candidate.

It may have fell just short of that top spot, but it definitely is in the running.

Both of these guys absolutely showed that Gatti/Ward type of grit. And although Ruslan Provodnikov suffered a cut (a disgusting one, which progressively got worse as the contest continued) early on – luckily located outside of his left eye – he had zero quit in him. Lucas Matthysse’s debilitating uppercuts and iron-fisted combinations looked convincing enough to halt most any fighter in the 140-147 pound range.

For the man who literally eats deer hearts raw because it gives him power, I just wish he had better basics. You can’t build a house on a faulty foundation and it’s the same principle with boxing, martial arts, et al. When a guy like Matthysse lands 327 out of 1,034 punches on you, that’s a problem. Provodnikov needs triage, both for his defense and for that gotdamn eye.

While the one draw score is understandable when you know it’s coming from a guy, Dan Ackerman, who actually knows less than nothing about the sport. He has a history of being the only judge who sees the bout he’s “judging” completely opposite of how the other two judges see it.

Speaking of amazingly bad judging, let’s not even bring up that Chris Algieri nonsense. Promoter to the stars, Bob Arum announced that he (Algieri) would face Pacquiao BEFORE the fight with the Russian even happened.

For the record, I believe that Ruslan Provodnikov beat Timothy Bradley back in 2013. When the ropes hold you up from flying into press row four separate times, THAT, my friends, is a knockdown. Pat Russell, get your shit together. However, the Siberian Rocky isn’t the only one who has been cheated out of a victory in this conversation. Some would say that Zab Judah should not have been awarded the win over Lucas Matthysse in 2010.

Let’s be honest here, Provodnikov’s defense is his offense. His actual actual defense is bordering on poor and piss poor. Either Lucas Matthysse turned into a master boxer from a boxer/banger/puncher or the Russian has some things to work on.

Anyway, bring on Matthysse – Bradley! Or even better, Lucas Matthysse versus Marcos Maidana and let Ruslan Provodnikov have his well deserved rematch with Timothy Bradley. Both guys are wonderful to watch and whatever their outcome, they deserve the spotlight.

Thanks for joining us again, next time we’ll be discussing particle physics and their practical real world applications. We will have food tips and tricks, if there’s time, we’ll even throw in some boxing talk. Please send all Devon Alexander memes to JESSEBOXINGTRIBUNE@GMAIL.COM, unfriend us on Twitter at @JESSEBOXING or stalk us on Facebook at Jesse Ian Lardies. Until next time, sante.