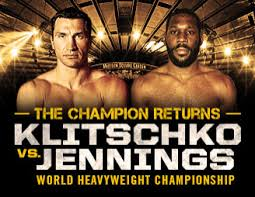 Klitschko, who is largely ignored by American boxing fans because of his tactical approach and aversion to taking risks in the ring, has not fought in the United States since his 2008 WBO heavyweight title win over Sultan Ibragimov. Klitschko logged 13 of his 17 consecutive title defenses in that span, and added the WBA title to go along with his IBF and WBO belts.

Klitschko has not lost since a 2004 TKO loss to Lamon Brewster, which came a year after suffering a shocking TKO loss to the late Corrie Sanders in 2003. He turned to legendary trainer Emmanuel Steward to polish some of his rough edges. Steward helped Klitschko develop his jab and turn it into both a potent weapon and defensive tool. Added to his already formidable right hand, Steward helped develop one of the best heavyweights of this generation who has reeled off a title reign second only to Jack Johnson. And while Klitschko detractors will point to the shallow pool of talent in the heavyweight division, the fact remains that Klitschko has been head and shoulders above his competition.

Bryant Jennings comes in as an 8-to-1 underdog, by most outlets, and is confident in his chances at dethroning Klitschko despite his lack of pro experience. He was brought along carefully, but in his last two fights Bryant has defeated Artur Szpilka and Mike Perez.

Jennings is one of the best pure athletes Klitschko has faced since David Haye, and his freakishly long arms allow him to touch up his opponents at a safe distance. He doesn’t have exceptional power, so his best chances lie in trying to outbox Klitschko to earn a decision victory.

Klitschko is well known for his patience, technical abilities, and the concussive punching power when he connects with a one-two combo. But quite possibly his most impressive weapon is his left hook. Klitschko will occasionally lead with his hook, which starts out looking like a jab before quickly looping around, often connecting and producing good results. He also effectively, and sometimes excessively, will clinch after he lands and finds himself in close range.

The knock on Klitschko is his willingness to play it safe in the ring and slowly and methodically dismantle his opponents. Yet another downside to Klitschko has always been his chin, or lack thereof. Since his two stoppage losses to Sanders and Brewster, Klitschko has been rocked or dropped several times. Steward’s taking Klitschko’s natural athletic ability and turning it into great ring generalship have helped Klitschko avoid taking many big shots.

Come Saturday night, Jennings will be looking to score with his jab. He’ll be one of the few who can get to Klitschko and not be in immediate danger. But if Jennings starts to get lazy with his jab, Klitschko will find an opening to throw his straight right hand over the top of it. Jennings will also have to be wary of using his right hand at the wrong time and leave himself open to Klitschko’s left hook. If Klitschko is able to land his left hook a few times, he may drop Jennings outright or open up more opportunities for his right hand. And as he’ll be giving up 3 or 4 inches in height and 20-25 pounds, Jennings will have to look for openings up the middle. Klitschko can take away those opportunities with his right hand and a timely forward step-and-grab to tie Jennings up and lean on him, sapping his energy.

Bryant Jennings certainly has the athletic ability and tools to cause trouble, and possibly even upset Klitschko, but he’s up against a disciplined and methodical machine who has faced it before and won. You can expect Klitschko to start slow and steady, but by round 3 or 4 he’ll have found a home for his left hook and searching for a home for his right hand. And it will only be a matter of time before he lands squarely and puts Jennings down a few times before the referee calls an end to Jennings’ night. Wladimir Klitschko will win this one – his 22nd straight – by way of TKO in round 7.