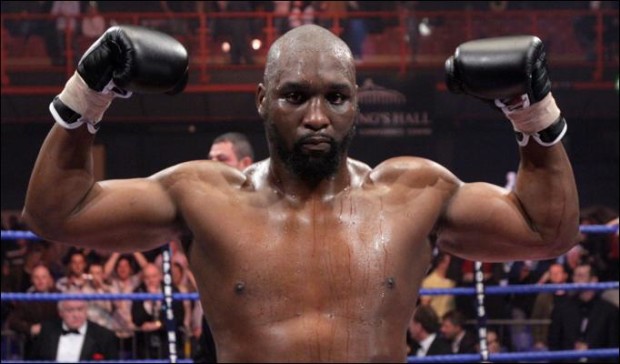 “Danny is the man … when he is confident he could knock most fighters out. To put it simple … he easily has the potential to be world champion. Come on Danny put it together now in these next few fights and get what you rightfully deserve … the heavyweight title!” —Poster named KCLBoxing

When these two met in York Hall, the 6’5” Kali Meehan, an Australian-based New Zealand boxer, was 23-0 and London’s Danny Williams was 22-1. Danny’s Commonwealth heavyweight title was at stake.

This appeared to be an even fight between two bombers though Williams seemed to have fought the better level of opposition including his historic fight with Mark Potter in October 2000. Kali did have wins over Colin Wilson (twice) and Bob Mirovic.

As soon as the bell rang, the two briefly pawed at each other and then Danny decked Meehan with a perfect right hand that landed flush on the New Zealander’s jaw. The “Brixton Bomber” immediately followed this with an identical and equally powerful right that crumpled Kali in the corner. In just 22 seconds, the fight was over and the popular and affable Danny Williams had retained his Commonwealth Title. Meehan, like many mugging victims, never had a chance. It was sudden, unexpected, and conclusive. Here it is: https://www.youtube.com/watch?v=rXrSwv3Kt24

Curiously, both men are still fighting, but their career paths have gone in different directions. Meehan is currently 42-5, while Danny has sadly become an easy mark for his opponents, having gone 6-18 in his last 24. Amazingly, however, he won his last bout against one Radek Varak (1-1) by 3rd round TKO in the Czech Republic on April 11, 2015.

Meehan, still very viable, KOd Michael Sprott in one in June 2014 in the Super 8 Heavyweight Tournament Final in New Zealand, and then sent Shane Cameron into retirement with a UD victory last November.