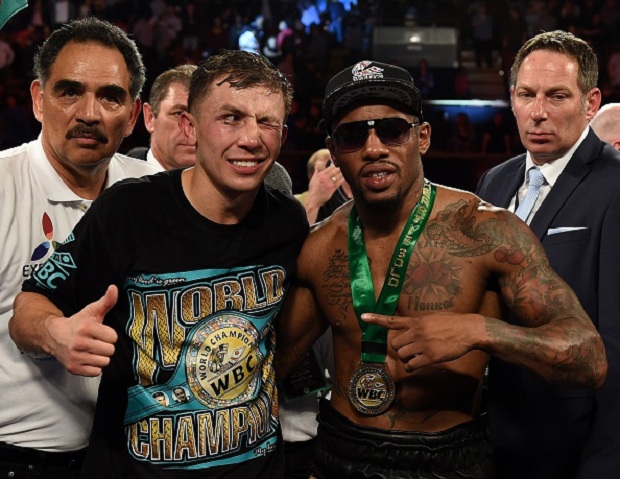 If you like security cam footage of old ladies being mugged and videos of baby seals being clubbed by Eskimos, then Gennady Golovkin’s HBO reign of terror is right up your alley.

Last Saturday, the affable Kazakh KO machine entered the ring as a -5000 betting favorite to bludgeon recent Footlocker Employee of the Month, Willie Monroe Jr. and he fulfilled his destiny with a sixth round TKO.

Coming into this bout, the best that could be said for Monroe’s chances was that his quicker legs may keep him from being knocked out as quickly as the usual “GGG” opponent.

And the experts were correct. Monroe, despite suffering two knockdowns in the second, lasted until the sixth round before falling one last time. He even managed to win a round or two along the way (at least on The Boxing Tribune’s mega, mega unofficial scorecard).

But the outcome was never in doubt at any point and even the semi-drama of two lost rounds was doused in cold water when Golovkin essentially admitted to carrying Monroe.

“Are you saying that–You’ve hinted at this in the past–that you don’t just want to score an early, one-sided knockout,” asked a way too glib and happy-eyed Max Kellerman in the post-fight interview, “…that you actually let your opponent..back into the fight?”

“Yes, of course, I feel it’s drama,” responded Golovkin in that lovable Kazakh accent, “…and today, Saturday night, this is not five minutes…I show my people, just, show…”

Yipes. Kellerman was practically giddy over this indirect admission of borderline fraudulent matchmaking. HBO’s main event was so poorly matched that the favorite could simply toy with his challenger and dispose of him whenever he felt like it.

Normally, fight fans would be up in arms over the idea that a premium cable network would serve up such a mismatch. But this is Golovkin and we’ve been here before. The man can do no wrong in the eyes of his bloodthirsty fans. Rather than grow increasingly skeptical of a man whose resume is filled with IOU’s and HBO-born publicity statements, they are building a path to all-time greatness for their icon on the backs of guys like Daniel Geale and Osumanu Adama. Reasoning with the true Golovkinites is like trying to convert a hardcore Scientologist.

But at what point do the regular fans express their disdain? Aren’t these the same people who complained mightily at the lack of competitive drama in the Mayweather-Pacquiao bout? Aren’t they the same fans who cry about Al Haymon mismatches and one-sided romps taking the place of “real” fights on premium cable? Or is this sport these days all about just wanting to see ‘some motherfucker smashed in the motherfuckin’ face?’

Golovkin’s popularity is understandable, though. It really is. He’s like Andy Kaufman’s lovable Latka character on Taxi, except totally badass and a walking highlight reel of carnage. He’s a subservient, smiling, “Good Boy” foreigner that doesn’t threaten your intelligence or strain your attention span with science and nuance and boxing.

Golovkin’s goal is to just beat up his opponents and smile and wave. His persona bears more than a passing resemblance to the crossover Manny Pacquiao, who also rode that lovable foreign hitman persona to fame and riches.

Golovkin, as both a person and a fighter, is easy to figure out. Deadspin has already dubbed him the “Scariest Man Alive” and this simplicity makes him easy to promote. Basically, he just wants to hit you really, really hard until you fall down. And, to his benefit, there aren’t many like him left in the sport.

The reality is that Golovkin is just one of a very small handful because his kind doesn’t usually last. Most of the fighters who play the game like “GGG” wind up being exposed by fighters who can move and box and apply a smart, cohesive game plan to nullify an all-attack mindset. Boxing history is littered with the remains of once-ferocious and unbeatable beasts bested by skilled thinking men. Even right now, fighters like Provodnikov, Matthysse, Kirkland, and Angulo are shells of their former selves after their individual rampages of terror were stopped by smarter opponents applying significantly less sexy strategies based on fundamental boxing technique.

But, again, Golovkin seems to be a unique case. All of these other beasts ran into their beast-masters because they were either forced into the awkward match-up or needed it to get their titles. Golovkin is under absolutely no pressure to fight anyone who might give him issues. He’s already a “world” champ with fourteen defenses under his belt and the beneficiary of a marketing angle that had painted him as the most feared man in the sport long before he was ever in a position to legitimately challenge any top fighter in his division.

The common sense response to the marketing campaign says that a Team Golovkin dead set on beating every top middleweight in the world would’ve hit the States in 2010 and not well after the division had pretty much whittled itself down to none. Instead of beating the stuffing out of third tier no-hopers in Europe, he could’ve been earning his way to mandatory status to face the likes of Sergio Martinez, Julio Cesar Chavez Jr., Kelly Pavlik, Paul Williams, and Winky Wright.

By 2013, he would’ve been having the big fights he claims to want and, likely, would’ve accounted for himself quite well. Then, there would be little dissent when people dared to mention Golovkin’s name alongside the all-time middleweight greats.

But, now, fans are forced into a position of either believing that GGG was strategically kept out of harm’s way until the division had killed itself off or that everyone, for the last five years, has simply been scared to fight him. There’s no real proof of either, just media reports and speculation. You believe what you want to believe, but it is more convenient to believe the latter.

And if you really, really believe that fear and fear alone– not Team GGG strategy or low-ball HBO purses– is at the heart of Golovkin’s comparatively weak resume, then this show will go on forever and the soft touches will keep coming.

You can email Paul at paulmagno@theboxingtribune.com or simply sit back and watch as he outrages boxing nerds everywhere. You can also buy his book, Notes from the Boxing Underground! Paul is a full member of the Burger King Kids’ Club, a born iconoclast, and an ordained minister in the Universal Life Church.