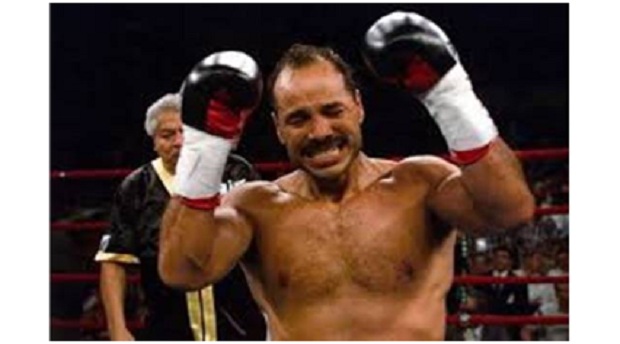 “He could have been one of the greatest.”— Osmar Alaniz, boxing coach and friend of the family

Ayala’s aggressive fighting style earned him the nickname” El Torito,” the Baby Bull. He was strong, hit hard with both hands, was mean throughout, but also possessed a technical sense of the sweet science that belied his aggressiveness.

Maldonado was expected to go early, but he had other ideas. The fact is, he was coming off a KO win over undefeated Roger “The Dodger” Leonard. Mario did go, but, before he did, he staggered El Torito and then decked him in the first round. Badly hurt, Ayala made it through the round and then took control of the fight, taking out Maldonado with seconds left in the third stanza. He would later admit that he monetarily visited Queer Street.

Maldonado would go on to be a staple in Atlantic City (where he fought on 18 occasions) and finished with a record of 28-13-1 including wins over Nino Gonzalez, Jimmy Batten, Curtis Ramsey, and Buster Drayton.

The following year and after 11 straight wins, the more seasoned and feared Ayala fought 6’2” New Mexican Robbie Epps (30-2 at the time) at the Freeman Coliseum in San Antonio, Texas in a scheduled 10-rounder. Epps had once been a stablemate, but he left Ayala’s father and later had reportedly said some things about Ayala’s family. There was bad blood before the fight. Even before the bell rang, a strange and high-decibel roar came from the pro-Ayala crowd, kind of a scary half whistle-half scream. Presumably, the whistling represented boos for Epps, while high-decibel shrieks were cheers for the much shorter Baby Bull.

Epps was no slouch having won his first 22 pro bouts and having beaten Darryl Penn and the very capable Dwight Davison (28-0 coming in).

When the bell rang, Torito, who said he wanted to hurt Epps, went after his opponent like a bull goes after a capeless matador. He didn’t let up with his accurate heavy left hooks and concussive right leads until referee Dickie Cole stopped the brutal mugging at 1:32 of the first round. To punctuate matters, Ayala screamed at the beaten Epps and continued to rain blows upon him as the crowd continued to shriek its approval. Epps needed Lou Duva to help pull Ayala off him. Referee Cole tried but couldn’t do it. The crowd loved it, but it was a harbinger of things to come.

These Ayala wins flew under the radar and exposed rare weaknesses in the Baby Bull’s arsenal—a possible weak chin and more to the point, a questionable flaw in his character. But no one could have imagined back then just how serious that flaw was.

After a turbulent life—much of it spent in prison—Tony passed away in 2015 at age 52.