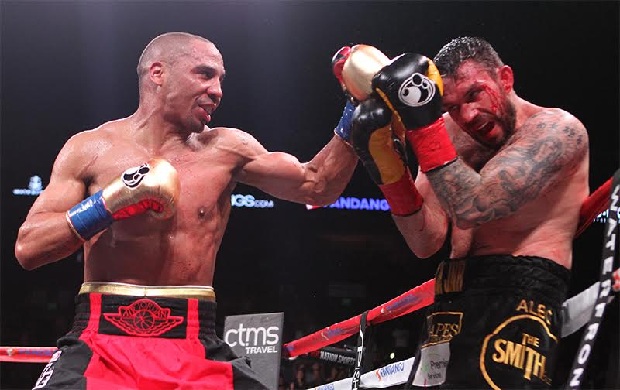 It’s not at all odd that Andre Ward would find himself the target of disrespect and derision. I’d love to say that it boggled the mind or even gave pause for thought, but it’s all so predictable.

Ward returned to the ring after a nineteen month absence Saturday night to pummel no-hope tune-up Paul Smith– a bout that would serve as the punchline to those intent upon turning Ward’s name and legacy into a gigantic joke.

You see, the critics won’t tell you this– and some may not even be consciously aware of this– but Ward committed the unspeakable boxing sin of being a freeman in an industry full of slaves and indentured servants.

Even after winning an Olympic gold medal for the United States and coming out of nowhere to not only win the World Boxing Classic tournament, but also clean out the talent-thick super middleweight division, Ward is still subject to endless sniper attacks from media and a large subsection of fans.

The problem began when Ward started being a man and not a fighting worker drone, shortly after establishing himself as the best of the 168 lb. class.

An ugly, contentious legal battle erupted between Ward and then-promoter Dan Goossen over the legality of Ward’s contract. Courts would uphold the Goossen contract a couple of times during the mess, but Ward insisted on following through with further attempts to break free.

Ward claims that Goossen was not respecting co-promoter Antonio Leonard during the negotiating process of any of his recent fights and had also not paid Leonard money owed to him. Leonard had reportedly bought out Ward’s contract prior to Ward signing with Goossen and there was, according to Ward, an agreement that he would be co-promoter alongside Goossen.

“Both of those guys put up money to re-sign me. It was 50-50. I took Dan Goossen’s money and I took Antonio Leonard’s money,” Ward told RingTV back in 2013. “I can’t in good conscience walk away from this man after having taken his bonus and know that he’s not getting paid and that he’s not getting compensated. That he’s being ignored and just continue to go on like things are OK.

“That’s the root of the issue. That’s how this thing got started…That’s a friend of mine. That’s a business partner of mine…I’m not OK with that. I don’t mind the bad press of Ward being difficult, Ward doesn’t want to fight, Ward’s ruining his career.”

Ward also claims that, while he gets the blame for his inactivity during this contractual battle, he was always ready to fight during the legal melee, but that Goossen wasn’t putting through any offers.

“…We’re willing. Make us an offer. But no. There hasn’t been one offer since December. That’s the reality of the situation,” Ward said during that same RingTV interview. “…There are off-the-record conversations taking place. Contrary to what I’m saying right now and it influences what happens on the record. And general fans they don’t know any better. They read it. They regurgitate it and then they say, ‘Ah man….’ I’m OK with that because I know what I’m standing for is right.”

Goossen, of course, refuted Ward’s claims right up until he died last September from liver cancer.

So, that leaves us with a he said-he said situation, but one highly-charged and tangled up with issues tied to the the sport’s politics as well as its core aesthetic.

Veteran boxing writer/podcaster Eddie Goldman had this to say when contacted for a comment by The Boxing Tribune. “While not a full-blown rebel, Andre Ward received virtually no support from the greedy media in his legal battle with his late promoter, Dan Goossen. And this is in a ‘sport’ with no union or collective bargaining agreements.”

Goldman’s words hint at another factor that may have put a target on Ward’s back.

Before the Goossen battle, Ward was already falling deeply out of favor with many old guard-types for introducing the absolute, ultimate no-no untouchable subject– the formation of a fighter union to advocate for athletes’ rights.

Although no real steps were taken to actually initiate a union, the very idea painted Ward in a new light to those with a vested interest in not changing a thing. Suddenly, the All-American, God-fearing kid coming out of nowhere to chew up the division’s very best, and who normally would’ve been a no-brainer for mainstream stardom, was getting manhandled by the media.

He was portrayed as either a cheater who attacked with elbows and headbutts or a mega-dull nobody who nobody wanted to see. And even when TV ratings proved that Ward was as big a draw as any other American fighter not named Mayweather, the “he can’t draw” tag still persisted. If fans hear that nobody wants to see a certain fighter long enough and with enough persistence, soon the reality becomes that nobody wants to see him.

The Goossen lawsuit played into this negative hit campaign. Ward was painted as a spoiled athlete holding out for more money, willing to destroy his own legacy as a fighter out of spite in a bid to beat the lovable old codger, Goossen.

Many in the media gleefully performed their duties as hitmen for the boxing establishment and relentlessly tore into Ward throughout his ring absence. There’s no doubt this will continue, even with Ward free from the Goossen contract and now signed with Roc Nation Sports.

“By all rights,” Goldman told The Boxing Tribune, “in this latest phase of his career, which began with his showcased win in his tune-up return against Paul Smith Jr., Andre Ward, a technical wizard and a brilliant, complete boxer, should become the face of American boxing. We shall see if his dignified ways are rewarded amidst the tidal waves of vulgarity, racism, and idiocy so prevalent now.”

Don’t count on class winning out in the end, at least not in boxing. Ward has established himself as a bold thinker, willing to put his money where his mouth is, and as a fearless freeman in a world of indentured servitude. These are not considered positive attributes to those who run the sport.

You can email Paul at paulmagno@theboxingtribune.com or get in touch with him via secret message board correspondence. You can also buy his book, Notes from the Boxing Underground! Paul is a full member of the Burger King Kids’ Club, a born iconoclast, and an ordained minister in the Universal Life Church.