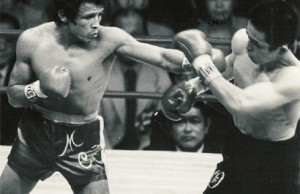 Six months to the day after the last defense of his middleweight title, a 15-round unanimous decision in his second fight in Monaco against Rodrigo Valdez, Carlos Monzon, champion of the world, one of only two undisputed champions at the time of the WBA’s takeover of the WBC, announced his retirement, putting to bed the rumors that he would fight again—while those around him knew he would retire pretty much from the moment the final bell rang to end his fight in July, Monzon officially vacated his WBA title on this day.

For the WBA, this was a golden opportunity to put their stamp on a new era. A tournament was announced which would pit the best eight middleweights in the sport against each other. The world boxing ratings at the end of 1977, a list maintained by the WBA using the same methodology that Boxrec would use in 2015, would provide the seedings in order:

Rodrigo Valdez, Gratien Tonna, Ronnie Harris, David Love, Marvin Hagler, Alan Minter, Bennie Briscoe, and Vito Antuofermo. Time and place would be determined for the tournament to kick off in the spring—in the event of a fighter’s injury or decision to retire, alternates would be selected from further down the list.

We’ll get to that later. Meanwhile…

The WBA drew some flak for its decision not to allow Miguel Canto to fight for the 112-pound title as a thumbing of the nose to the WBC, and the Canto camp made some noise about starting a political incident over it for the government overseers who were now watching the sport and making it very hard to operate in the United States without maintaining the appearance of fair play for the public.

As such, it came to pass that the WBA created a new weight class in between flyweight and bantamweight, and their inaugural title fight would feature none other than Miguel Canto. Canto, seeing an opportunity to make his name, began to call himself “Superfly” to match the weight class that gaining three pounds would afford him the chance to fight in.

His opponent? A 25-year-old Japanese circuit fighter they found at the Fukui Prefectural Championship by the name of “Irish” Masahiko Sakai. He had a story tailor-made for American audiences to embrace him for the fight at Caesars Palace in Las Vegas.

Born in the city of Obama in Fukui on October 9, 1952 to an Irish-American Army guy stationed in Japan on the periphery of the Korean War and a young Japanese girl, barely halfway through her teens, from the hinterlands, young Masahiko caused a scandal—his father couldn’t acknowledge parentage of the kid for fear of being labeled a child molester back home, and his mother could not tell the whole story for fear of bringing shame on her family, all the more so since the scars of World War II had hardly healed in the hearts and minds of many of the rank-and-file Japanese.

So it came to pass that Dad was drummed out of the Army, sent stateside, only to use some connections in the DC area to get himself into the CIA, while mother and child lived as outcasts in their village, which is where Masahiko learned to fight—he had to, in order to defend both his and his mother’s honor.

When the kid made good and came within a whisker of making the 1976 Olympic team before losing in the final of the Olympic trials to Noboru Uchizama at flyweight, it drew the attention of people who wanted to groom young Sakai-san for a pro fight. A few fights between Obama, Kyoto, and Tsuruga gave Sakai a 7-0 record with five knockouts; some shenanigans stateside orchestrated by his mysterious Irish dad among the US government spooks gave him a title shot.

It was almost too appropriate that a kid nicknamed “Irish”, even if he was Japanese, would fight on St. Patrick’s Day. The Irish-American community took a real liking to Sakai and managed to shorten Masahiko down to Mickey in advance of the fight. ABC fed into the narrative, giving the soft-spoken kid the VIP treatment. He was on the talk shows, the sports broadcasts, anywhere they could get him, all while spending his days training full-time.

Meanwhile, Superfly Canto stayed out of the media spotlight, training with the look of death in his eyes, determined not to lose the eye of the tiger as he kept vengeance in his mind for losing the flyweight title in the first place. When Muhammad Ali passed away in February, Canto spoke, but there was menace in his words.

Translated from the Spanish: “Men die. This is boxing, men die. If Sakai dies, he dies. It is a brutal sport.”

With every interview, every piece of news, every snippet from the Canto camp, the public was determined to cast him as the villain, creating a nice, easy comic book narrative of the plucky half-American kid from Japan taking on the evil, scary Pancho Villa bad guy. By the time fight night rolled around, it had become bigger than the WBA expected for a weight class it had conjured out of thin air and an opponent who was supposed to be naught but a patsy to placate a guy who could make trouble for them.

When the fight began, it quickly devolved into the mismatch originally hoped-for, as Canto battered Sakai around, chasing him back to the ropes, cutting down the ring, but unleashing only measured fury. Much like Muhammad Ali carrying Ernie Terrell, Canto would ease back on the throttle when it looked like the referee might step in and stop it, not pressing too hard for knockdowns, and when Canto dropped Sakai in the fourth, before heading to the neutral corner, he taunted Sakai, calling him maricón and imploring him to get up for more.

Onward the slaughter went, as to add to three more knockdowns throughout the fight, Canto also managed to cut Sakai above both eyes with a pair of punches, one in the seventh round, the other in the tenth. Sakai was bruised, bloodied, beaten but unbowed, as his story ceased to be about victory and became purely one of survival, showing the audience that what he lacked in boxing ability he would make up for in sheer grit and toughness.

Canto did not make it easy for him. The plan was clearly to close the show in the championship rounds, but to his surprise, Canto was unable to land the ultimate coup de grace. The bell rang at the end of round 15 with the result in no doubt but with Mickey Sakai elevated to the status of a new folk hero as he went the distance with his tormentor, never giving up or giving in.

The scores were academic—150-131 on all three cards, and Miguel Canto was the winner and new WBA Super Flyweight Champion of the World, but valiant in defeat, it was his opponent who earned the true love and cheers from the crowd. His father, watching ringside, could only express silent pride that maybe his kid made good after all.

In the post-fight interview, Sakai thanked his mother, his trainer, the fans, ABC, Howard Cosell, everyone…but he saved his final thanks for his hometown as he looked into the camera, bloodied and bruised, and said in halting English:

Fox Doucette covers boxing news and trends for Boxing Tribune News and writes the What If and Historical Fight Night alt-history series for The Boxing Tribune. This series airs noon Eastern on Tuesdays, just in time to read on your lunch break at work. Fan mail, hate mail, and “you’ve gone off the deep end with the setup for that pun” can be sent to beatcap@gmail.com.