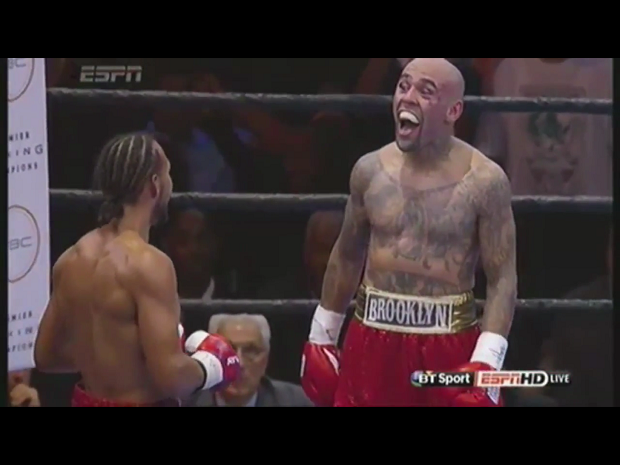 Hola mis amigos y familia, welcome to a Baskin-Robbins three-layer ice cream “Fudgie the Whale” cake shaped edition of Central America’s highest rated, most money-spinning proper pugilistic paper, The Sunday Brunch – We are the number one overseas source for domestic opinion. This week we’re rooting through miles of Shawshank Redemption-style shit tunnels worth of fake emails for your reading pleasure. So, without further ado I gave you your instructions in the dressing room; what I say you must obey. Cuidate, eschua y toco los manos…Let’s get it on!

What did you think of Keith “One Time” Thurman’s devastating one punch knockout of Luis Collazo live from Las Vegas on Pay-Per-View, baby? Woooo! – Teith Kurman

Thanks for writing in, Teith. Keith Thurman is a solid, young “B” level fighter who is gradually ramping up his level of his opposition. While there’s nothing wrong with his game at this stage of his development, I think it’s safe to say in a few years’ time he will be a slightly evolved version of the 2015 Keith Thurman that is open to counter punches, is sometimes wide with his shots and who doesn’t clinch when injured.

Had Luis Collazo been the type of fighter with a serious killer instinct and perhaps more sting on his punches, Keith Thurman’s Florida home-game could have had a pretty disastrous ending for the young 26 year-old titlist. All in all, “One Time” is a decent all-around fighter who will be better prepared for the top-tier of the sport in a few years. Not Floyd Mayweather, though.

Hey Jesse! Love your food and cat photos on your social media accounts…Any Walking Dead news to share with your fans? – Walker Bait

Hello. Do you think that if Miguel Cotto tries very hard and trains very hard that Miguel Cotto will beat Canelo Alvarez? Miguel Cotto is very confident and Freddie Roach is his best trainer and Miguel Cotto can prove that he is the real middleweight champion. – Ciguel Motto

Thanks for writing in, Ciguel…I wrote an article a few weeks back called the Five Things Miguel Cotto Must Do To Defeat Canelo Alvarez, you should read it HERE. If Cotto is going to beat Canelo, he is going to need to outbox the young fighter. I’m not saying that’s impossible, but if Miguel Cotto can somehow manage to box a perfect 12 rounds he can win – Floyd Mayweather showed how it can be done. Most people will argue that the Puerto Rican gave Mayweather one of his roughest nights to date and discuss fight math ad nauseam.

I don’t believe that because Miguel Cotto gave Floyd Mayweather (who had a serious flu that no one talks about) a few tough rounds that he will have an easy go with their soon to be shared opponent, Canelo Alvarez. If you look HERE, I’ve outlined exactly why I think that Saul Alvarez will likely stop Miguel Cotto inside of the distance.

Hey, Jesse. Can you give me a quick recipe for fried chicken? Also any dipping sauce recommendations? I’m so hungry 🙁 – Ran Dafael

Thanks for writing in again, Ran. For perfect fried chicken, take your trimmed meat and place in a brine (water 1/2 cup salt, 1/2 cup sugar) and let sit in your refrigerator for 6-24 hours. Remove from brine and rinse very well. Make a dredging station near your fryer with one bowl of two eggs mixed with heavy cream and the next bowl filled with flour, 2 tbs baking powder and panko bread crumbs in a 2:1 ratio.

Season the flour (paprika, garlic powder, onion powder, sugar, salt, msg, white pepper, black pepper, smoked salt and cayenne pepper…If you need the exact ratios, ask in the comments below) and use some of that seasoning in your egg mixture as well.

The trick to the shatteringly crispy fried chicken will be in this next step. Take some of your egg mixture and pour it in your flour. this will create little wet puddles of flour that will stick to your chicken to form ridges and contours when fried. Dip milk to flour then repeat that step making sure that the chicken is wet and coated with the flour mixture before dropping it in the hot oil. Cook till golden, brown and delicious!

Try blending two bunches of cilantro and a handful of parsley with the juice of two limes and one lemon with some mayonnaise, salt, pepper and msg for a wonderful dipping sauce. Or, try mixing honey, lemon juice and a bit of Sriracha for a spicy/sweet alternative.

Think I’m an asshole? Let us know in the comments section below! Best comment gets a gift card to Circuit City (valid in stores only)!

Thanks for joining us again this week, we will be back next time with more dangling participles, contractions and Mad Lib-style sentence structure. We will be discussing why thinking the earth is either flat or 6,000 years old in 2015 makes you just a bit dimmer than the rest of the class. And if there’s time, we’ll squeeze in some boxing talk! I’ll be back, I love the smell of napalm in the morning and nobody puts Baby in a corner…Until next time, sante.