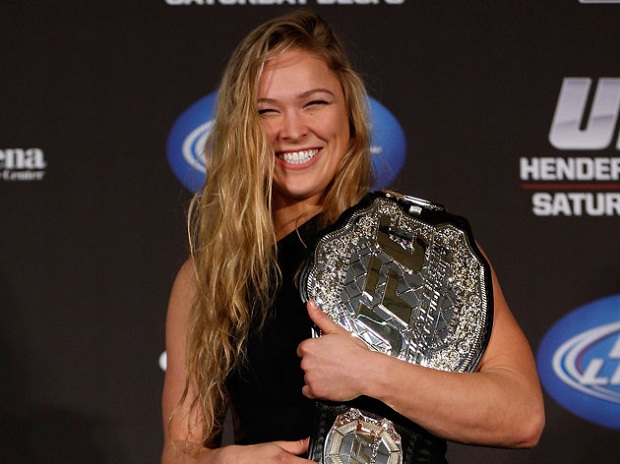 There’s a reason for that.

That reason has to do with the fact that, although we all generally aspire to great things in the presence of others, we can’t resist our base instincts when left to our own devices.

It’s the reason why a well-written, thoughtful article on an essential subject will get far fewer reads than a quarter-page full of semi-literate, poorly-informed prose crowned by a click-bait headline.

People like to curl up with a hefty dose of dumb self-indulgence and there’s becoming less and less tolerance for things that don’t tickle one’s base instincts or deliver immediate satisfaction. Fight it, complain about it, but it doesn’t matter. The public wants what the public wants.

And that takes us to Ronda Rousey and the UFC hype machine.

Rousey is a tremendously talented mixed martial artist who, as a female, is light years ahead of the pack of available female UFC talent. As a result, Rousey is in perpetual mismatches against a parade of tough-talking Zumba teachers, gym matrons, and female self-defense instructors. Saturday’s 34-second destruction of Bethe Correia was pretty typical of what to expect of a UFC PPV topped by Ronda Rousey.

But the fans don’t seem to care and a case could be made that Rousey is the biggest draw and best overall asset the UFC has at the moment. Boxing could learn a lot about wedging itself into the mainstream by following the example set by the UFC and Rousey.

The Rousey magic certainly isn’t about sport or anything related to the competitive aspect of sport. Her bouts are flat-out, pre-determined mismatches. When she fights, the only thing in doubt is whether her opponent will make it past the one minute mark.

As a reasonable human being, you’d be inclined to think that such poor cost-to-entertainment ratio mismatches atop a PPV would keep buy rates low. But, no. The Rousey business is good and it will probably keep getting better for quite some time.

You see, the braintrust behind the UFC has never concerned themselves with anything other than delivering product aimed at their audience’s base instincts. There’s no pretense that they’re about anything other than some “dude” (or “chick”) getting smashed in the motherfuckin’ face. Of course, the sport of mixed martial arts is about more than just a caveman clobberfest, but the UFC marketing machine doesn’t care about any of that. They are always working their audience, lining up their marks for the sale, and giving them exactly what they want.

Ronda Rousey, as the UFC’s next big thing, has been shoved in front of every camera, microphone, and media source available. Her face is everywhere and her image has been tied into every combat sport niche where potential fans may be found, from boxing to pro wrestling. As a compelling figure with an intriguing back story, she’s also been pushed out into the mainstream, where the curiosity factor is working to draw newcomers to her bouts. Aside from being a bad-ass warrior, Rousey is a walking billboard for her company and her sport– a 100% total asset.

Meanwhile, boxing’s promoters and powerbrokers continue to fail at producing anyone capable of drawing outside their niche. The fans– at least in the U.S.– work to tear down the rising stars of their sport out of bizarre partisan loyalties in promoter vs promoter and network vs. network turf wars.

Boxing’s inability to cultivate and promote a mainstream star does not come from a lack of raw material. There are certainly many compelling characters and inspirational back stories from which to choose. Even the handcuffing politics of the sport can be overcome by the right fighter being pushed in the right way.

After all, we see from the UFC and the rise of Rousey that none of this is about competitive match-ups and “earned” spots anymore. Instead, the construction of a mainstream star is all about promotion, promotion, and more promotion. Throw some of the curiosity factor in there and you have yourself a star. And when your star gets in the ring, make sure he/she delivers the kind of carnage that will keep your fan base happy.

Maybe the critics have been wrong all along and Gennady Golovkin IS the perfect crossover star for this new age of combat sports. As a friendly, foreign, KO machine strategically matched up to deliver ultimate destruction with a goofy smile, Golovkin seems to fit right into the Rousey blueprint to crossover stardom. Hell, TMZ seems to love “Triple G” already.

Maybe the price to pay for a stab at mainstream appeal involves propping up a handful of crossover candidates and manufacturing total awesomeness. At this point, building up with skilled fighters in competitive bouts seems like a long road to take for a long shot chance at success.

This is not the era where you’ll be able to convince fight fans that two skilled combatants can put together greater, more action-packed battles than two fist-chucking brutes or, even, that a combat sport is about anything other than World Star-style squashes.

Whatever one thinks about that assessment, though, the absolute, undeniable truth is that boxing’s promoters need to get off their asses, move away from petty feuds with business rivals, and actually PROMOTE.

You can email Paul at paulmagno@theboxingtribune.com or listen to his musings on Rubber Duckie Boxing, the world’s first CB radio-only boxing show, every day from 7 am to 11 pm. You can also buy his book, Notes from the Boxing Underground! Paul is a full member of the Burger King Kids’ Club, a born iconoclast, and an ordained minister in the Universal Life Church.