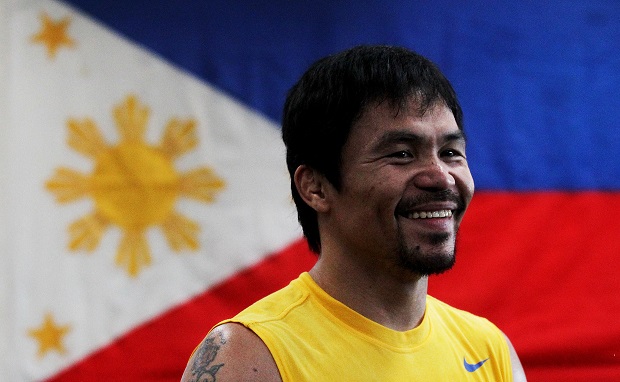 Hola amigos y enemigos, welcome to a completely relevant and 100% off-line edition of Panama City’s highest rated, most money-spinning proper pugilistic paper, The Sunday Brunch – We are revealing your motives, questioning your sources and fact checking your fact-checkers. This week we’re poking holes in some popular bullshit balloons and taking a shot in the dark at a few things that Manny Pacquiao will need to do to get a rematch with Floyd Mayweather. Hold on to your pickled pig’s feet and crack open a fresh balut, we’re about to sort through this nonsense. With that being said, I gave you your instructions in the dressing room, what I say you must obey. Cuidate, eschua mi y buenos suertos…Let’s get it on!

“For years both men circled each other, as fighters often do…”

Earlier this month, the national hero of the Philippines, Manny Pacquiao had finally secured a dream fight with the sport’s biggest draw, Floyd Mayweather. Many were skeptical that this bout would ever take place; both major media outlets and boxing fans alike doubted the world would ever see a Mayweather-Pacquiao showdown.

Years of propaganda (and other drug testing related issues) from both sides of the equation, from their promotional teams and from their armies of subservient writers and bloggers led most to believe that all the red tape would just be too thick for anything positive to come out of the mess.

But, it actually happened.

Some people saw a boring fight, some witnessed a masterclass. Others figured out that re-watching the bout in super slow-motion while upside down led to an all together different viewing experience where the winner was actually the loser and the loser out-landed, out-threw and out-worked the defending champion.

Everything you read on the internet IS true. Just remember that.

The outcome was predictable if you had only a modicum of fight knowledge. Or, if you didn’t have a personal grudge against one of the combatants.

For Manny Pacquiao to secure a second fight with Floyd Mayweather he will need no small amount of luck, perverseness and charm, as a wise wizard once said. Here are the top two things Manny Pacquiao must do to land a rematch with the sport’s fattest cash cow.

2. In order for things to flow in the right direction for Manny Pacquiao, he will need to start at the root of why an actual rematch is possible when the first fight was such a one-sided shut-out.

It should be well known (because it certainly is well documented) by now that at promoter, Bob Arum’s behest, the world was fed a line of absolute bullshit concerning a now infamous shoulder injury “sustained” by Manny Pacquiao. The end of the story went something like this: God and salt water cured the rotator cuff injury.

The lies that were emanating from certain “media” outlets were both comical and absolutely embarrassing.

Start fresh and come clean with the truth, the world will respect you more in the long run. Knowledgeable individuals know that the real snake behind this media-misdirection and propaganda spin machine is Bob Arum – A man whose lies are so quotable that most boxing fans at least know one by heart.

1. No amount of salt water will help Manny Pacquiao once he is finally again in front of Floyd Mayweather (make no mistake about it, their second bout will happen in 2016), so he will need to publicly bang the rematch drum to bolster his case and re-raise awareness to the masses that this fight must take place again…At a premium price, of course.

He will need to restate his case that Compubox and Kenny Bayless were against him all night. He will need to speak about the angles of punches that were clearly missed by American television cameras.

He will need to publicly insult Floyd Mayweather about the most intimate of topics. Manny Pacquiao and his promotional outfit will need more “hit pieces” written by HBO “consultants” to besmirch Floyd Mayweather by any means necessary. These are things that often times garner viewership and interest to the less informed.

Most importantly, Manny Pacquiao will need to string together at least two more high-profile, knockout victories to tempt Floyd Mayweather out of “retirement” for another insane payday and another chance to make history.

Think I’m an asshole who doesn’t know shit about boxing? Let us know in the comments below! The 48th comment will win a prize!

Thanks for joining us again this week, we’ll have more dangling participles, run-on sentences and dad jokes for you next Sunday. Contact us on Facebook at Jesse Ian Lardies. Follow our Titter/Periscope feed @JESSEBOXING and email us your mom’s Filipino recipes at JESSEBOXINGTRIBUNE@GMAIL.COM…Until next time, sante!