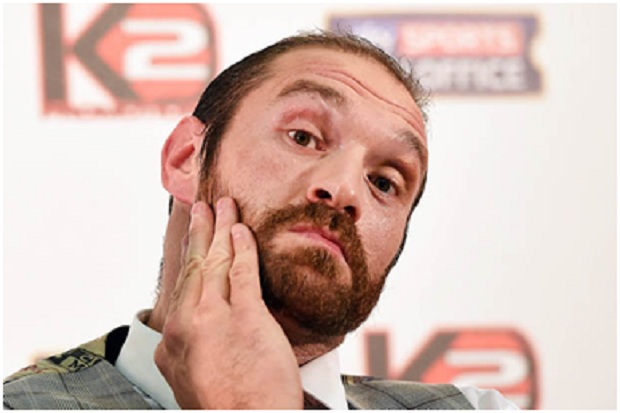 This will be the final edition. Nothing can top Tyson Fury. Wladimir Klitschko told the 27 year-old Batman wannabe that he (Klitschko) would pull out of their imminent fight with an injury—and that’s exactly what happened! I can’t top that!

Main Events to Adonis Stevenson: “pick up the phone and MAKE THE FIGHT! Because all we hear is ‘Cluck, cluck, bock, boooock!”

Ronda Rousey: “…for girls, it raises your testosterone, so I try to have as much sex as possible before I fight..”

Klitschko: “I also believe I can change him in a better way as a person. I’ve done a great job as a therapist for David Haye. And David Haye became a better person after fighting me [in July 2011].”

Klitschko: “I have a new job for you buddy, I have good friends in the circus and they can give you a new job as a clown. It is a really tough job to make people laugh. You can join the circus after losing to me and that is a compliment because there is a difference between acting funny or being funny and being stupid. From watching the hysteria, the rolling around and changing costumes, it is in your genes, you have the talent to make people laugh. That doesn’t mean you can fight.”

Tyson Fury: “Call me a clown again and I will fight you here and now. Just make sure you turn up on the night. ..You have never fought a Gypsy king before. I cannot wait for this…I wish it was this weekend. You would be getting knocked out…You will be tasting a lot of the canvas on fight night. Nobody can help you… I’m coming to knock you spark out. You’re going to be begging for help.”

Klitschko: “There are a lot of doctors that can give you a good prescription and give you the help you need. “I will save you…You are visiting a doctor now.”

Fury: “I wanted him [Wladimir] to know what time it is. I ain’t here to play games…I do think I’ve rattled him – properly. If anything’s going to rattle him that would be it, because that was a hell of a show, I tell you.”

Klitschko: “I am so sorry that I am not able to fight on October 24. I also apologise to my opponent, who has spent many weeks preparing for this fight. I will do my very best to recover as fast as possible.”

Tyson Fury: “Well, it’s official. Klitschko has pulled out of the fight with an injury to his leg, it’s a bit funny as I predicted this would happen…You’ve got to wonder what’s going through their minds. Am I that intimidating? Am I that scary…Batman worked a treat then didn’t it and cost me a fight again? But it is one of those things….Let’s hope he reschedules, but whatever Klitschko’s reasons are I can tell you there is no injury…He either needs more time to prepare or more time to get his mind straight. There is definitely not an injury, definitely not.”

Fury: “I’m wounded for all these people and this happens too much in boxing, and it’s not the fighters that pay for it, it’s the fans. We get our bits and pieces back – they don’t..”

Fury: “I saw Eddie Hearn. I call him Eddie ‘the B*tch Hearn.’ He put out a tweet saying he wants me on the undercard in an eight rounder. What does he think I am [starts laughing]? Eddie, have a day off. Have a day off mate…I’m the number one mandatory in the world, and he wants to put me in an eight rounder against some random guy. He thought I was born sometime last week, green as grass. Unfortunately for Eddie, I was born the 12th of August 1988. I’m repping for the people who was born in the 80’s…I’m going to have to wait for Wlad. I’m contracted in. I can’t take no more fights in between. So what can I do? I’m probably going go to Dusseldorf on the 24th of October to, meet up with all me fans over there and get drunk. Sounds like an idea for me. Celebrate the f***ed up nobody wants to fight me.”

Most outrageous comment (s) and/or YouTube’s of the week:

Paulie Malignaggi: “I’m sure a fight with Kell Brook would sell well in the UK if I can get some wins and what not, but like I’ve said before, it all depends on how I feel after my fight in Italy,”

Deontay Wilder: “He’s [Klitschkos] been fighting guys we don’t know names of or how to pronounce or where they came from.”