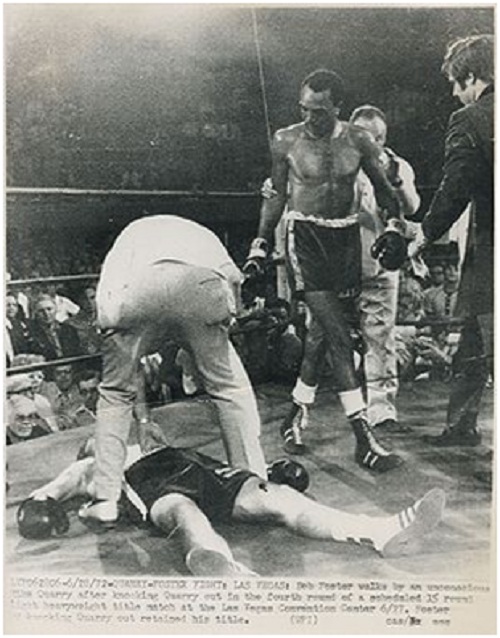 “When I hit Mike Quarry, I thought I killed him. He was laying down and his feet were shaking, he was trembling. I was looking in his face and you couldn’t even see the pupils of his eyes, they were rolled way back up in his head. And Billy, my trainer, said, ‘Come on Bobby, don’t look at him.’ Billy thought I killed him too…” — Bob Foster

‘They might as well put on my epitaph: Here lies Jerry Quarry’s little brother.’—Mike Quarry

On June 27, 1972 at the Convention Center on Las Vegas, Nevada, undefeated and slick counter puncher Mike Quarry (35-9) was giving Bob Foster all he could handle until lightening struck in the fourth round. Foster was coming off a stoppage over Vincente Rondon 9n April, while Quarry had stopped Chuck Hamilton also in April. Both men had wins over “The Scappoose Express”, Andy Kendall.

Finally, the fast pace of the fight caught up with Quarry and he began to tire leaving himself vulnerable to Foster’s withering hooks. And sure enough, Foster landed a right cross-left hook combo that dropped Mike like he had been shot. He went down on his back and out-and for some reason the clueless referee needlessly counted him out. It was a tense moment for Foster, who had great concern for the life of his unconscious opponent as did the many spectators including his Mike’s brother Jerry who would fight Ali on the same card.

Sadly, Mike Quarry passed away at the age of 55. The cause of death was pugilistic dementia, the same disease that turned Jerry Quarry into a confused, childlike man before he died at 53 in 1999.

Bob Foster passed away on November 21, 2015 and boxing lost one of its greats. He never lost his light heavyweight belts He was 76.

Both men had provided thrills and chills, but none was more notable than the night “The Hook from Hell” was launched.